Another great day at the festival, though it didn't quite match the first.

Saturday at Secret Garden Party got off to a fairly slow start for me; it was pouring with rain for the majority of the day so I tried to stay under shelter for as long as possible before facing the festival which was becoming more swamp like by the hour.  When I did eventually decide to brave the wet, it was to go and watch a childhood icon of mine; Kate Nash.

11 year old me was completely obsessed with Kate Nash’s debut album Made of Bricks, so I was very excited to finally see her live, especially as it was guaranteed that she would be playing tracks from the LP in honour of its ten year anniversary.  Throughout almost her entire set there was torrential rain, but she still attracted a reasonably large crowd, most of them likely enduring the weather whilst waiting for her to perform her most well-known song, ‘Foundations’.  Nash performed a mixture of new and old material though I found her performance quite unusual – she screamed/yelled the majority of her songs rather than singing them which made her set less enjoyable than I’d hoped it would be.  A highlight was when she sang her track ‘Birds’, which was always one of my favourites, and she performed it in a style true to the original; shouting kept to a minimum.  And of course, ‘Foundations’ did get the whole audience singing along, though I’d say the crowd size had somewhat diminished by this point compared to the start of her set.

After this, I watched Jorja Smith take to the Great Stage and she truly did make the rain bearable.  Her beautiful vocals were just as powerful live as they are on record and she really seemed to make a connection with the crowd; they appeared to know most of the songs that she performed and even if they didn’t, her entire set had a great reception.  She interacted a lot with her spectators throughout the set which clearly made a significant impact on how she was received, especially as the weather was pretty dire.  A particular crowd favourite was when she performed ‘Get it Together’, her collaboration with Drake on his most recent mixtape More Life – she requested that the audience had to “be Drake” and sing his parts of the song.  She also performed a cover of noughties classic ‘Heartbroken’ by T2 which went down well with the audience and was a song that everyone knew the words to.  Her low key and sometimes melancholic tracks were the ideal soundtracks to a rainy afternoon. 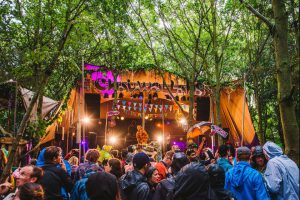 Following this, I ventured to one of my favourite areas in the festival; the Lost Woods/Chai Wallahs stage.  My main intention was to find some rain cover under all the trees but accidentally stumbled upon the Tropical Tea Party, hosted by DJ Hippopotamus.  Clearly, several people had a similar idea to me, as Chai Wallahs was absolutely rammed with people dancing to the reggae and carnival music.  It was great to see that the wet weather wasn’t dampening people’s spirits (pardon the pun), and was actually leading festival goers to find stages that they may not have otherwise.  For fans of dubstep or drum and bass music, the Lost Woods stage next to Chai Wallahs was hosting a more appropriate set.  Though I stuck with the Tropical Tea Party.

Having looked at the SGP programme earlier that day, there was one thing taking place at the Spiritual Playground that I’d been counting down the hours for; Alt Disney.  Essentially an hour and a half of Disney music being played in a tent, featuring Shesus DJing (although not as Shesus).  This filled the gap before the Saturday Spectacle took place and was specifically exhibited for those craving a singalong.  Music featured was ‘I Just Can’t Wait to Be King’ from The Lion King, ‘Bear Necessities’ from The Jungle Book and ‘Be Our Guest’ from Beauty and the Beast, amongst many other classics. 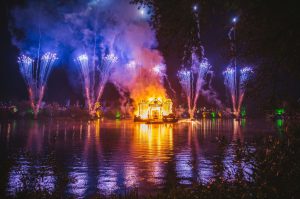 Directly after this was the much anticipated Saturday Spectacle, a special fireworks display that Secret Garden Party puts on every year – though this time it was likely to be extra memorable, as it would be the last ever one.  SGP is known for its unusual lakeside location, which even features a stage in the middle of the lake, so it was interesting to see this incorporated into the display.  But when I say incorporated, I should really say destroyed – the Lake Stage was set alight during the Spectacle and burnt down to reveal a huge emblem of a heart, which continued to burn throughout the rest of the weekend.  It appeared to be SGP’s way of saying that although it was the death of the festival, its heart would live on.  There then proceeded to be an impressive fireworks display accompanied by the music playing from the Great Stage.  A poignant moment was the last few fireworks being set off as Harry Styles’ solo track ‘Sign of the Times’ played – the lyrics, “welcome to the final show” and “they told me that the end is near” felt particularly sombre as the display drew to a close. 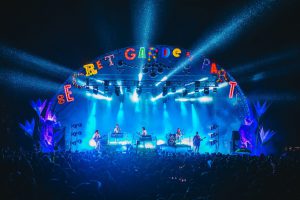 Headlining that night was electronic group Metronomy, another act that I wasn’t overly familiar with.  Once again the stage was beautifully lit – the band’s setup featured large white blocks which changed colour.  Similarly, all band members except one were dressed head to toe in white, giving the appearance that their clothing was changing colour too.  The members of the band all played multiple instruments, so it was interesting to watch them switch roles throughout the set.  However, unlike Crystal Fighters the previous night, I didn’t find that Metronomy’s music made me want to dance despite not knowing it.  Their songs sounded a bit too samey for me, and none were overly upbeat.  However they’d still attracted an enormous crowd, so clearly, fans of their music were enjoying themselves.  I think that their set may have been better suited for an earlier time – it was a slightly underwhelming performance following the magnificent fireworks.