The first day of SGP was wonderful and weird, and undoubtedly set the tone for the rest of the weekend.

This July saw the last ever Secret Garden Party festival taking place in Huntingdon, Cambridgeshire – a sad occasion, as it’s an event that’s been loved by thousands for over a decade.  Despite the weekend being slightly tainted by the festival’s demise, it didn’t stop it from being a spectacular three days.

Having arrived the previous afternoon and spending Thursday night staying out far too late to explore the Lost Woods and the various dance stages at The Drop, Friday morning was full of excitement for the weekend to come.  I set off on my own at midday to go and catch the first of the music acts.  I headed to the Great Stage to watch singer-songwriter Tom Grennan’s set.

The crowd at the main stage was fairly sizable for such an early slot – the majority of the spectators were sat down on the grass, likely nursing their hangovers from the night before, but could still be congratulated for their effort to throw themselves into the music side of the festival. However, if anyone’s set was going to help the struggling audience, then it was Tom Grennan. His soulful vocals and laidback tracks were the perfect remedies for the early afternoon. Grennan rose to fame when he featured on drum and bass duo, Chase & Status’ 2016 track, ‘All Goes Wrong’, so it was a real treat when he performed his stripped down version of the song. Upon the announcement that he was going to perform his track ‘Something In the Water’, there were several cheers from the crowd and they were encouraged to stand up and dance along with him. Grennan himself even commented on the time of his set: “Oi it’s well early in the morning, innit. I’m usually in bed, man.” At least the festival goers weren’t alone in their fragility. 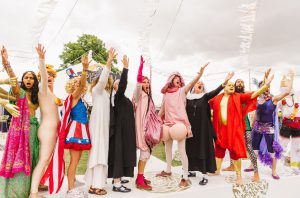 Following that funky set, I visited a stage called The Spiritual Playground.  On arrival, I witnessed a man and woman dressed in human sized penis and vagina costumes carrying out a dance that depicted a male and female relationship – with storyline appropriate music e.g. Marvin Gaye’s ‘Let’s Get It On’ during the anticipated moment.  As bizarre as this spectacle was, it was definitely enough to intrigue me and I ended up staying at that stage for the next two hours.  The next act involved a group of ‘deities’ – amongst others, there was a woman dressed as Jesus (dubbed Shesus), a man with a strong Bristolian accent painted gold and dressed as Buddha, the Hindu goddess Lakshmi (extra arms included) and my personal favourite, Gluten, which was a woman in a skin coloured catsuit covered in fake doughnuts, croissants and a crown on her head made of pasta.  They announced that they would perform any ceremonials required and encouraged audience members to form a queue to carry out weddings, cremations (no real fire involved) and bah mitzvahs as needed.  I nearly got married to two friends until I witnessed the amount of public humiliation that these unconventional ceremonies entailed. 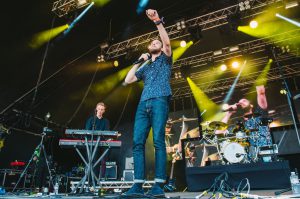 For me, the highlight of Friday’s music would have to be the electronic duo, HONNE.  They played the 6 o’clock set at the Great Stage which was truly special – the sun was shining and the crowds were there in the masses, adorned with plenty of glitter and shiny lycra outfits.  Along with playing tracks from their debut album and the EPs that had preceded it, they also performed their brand new single ‘Just Dance’, which they released only weeks ago.  HONNE definitely have music that you can dance to, and the audience clearly thought so too, as everyone was moving in the lovely weather.  Lead vocalist Andy commented that they “loved this festival” and how “it’s sad it’s coming to an end” – though their upbeat and funky set made the afternoon feel much more like a commemoration than a commiseration. 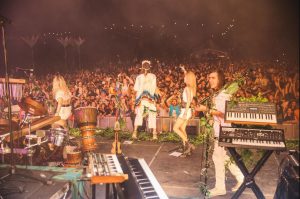 Friday night’s headliner came in the form of British alternative band, Crystal Fighters.  Personally, I only know a couple of their songs but was keen to see them regardless and I’m so glad that I did.  The Great Stage really was something else at night; the setup and lighting of the area itself were wondrous enough, with the giant flowers that surrounded it lit in different colours and the mismatched Secret Garden Party letters above the stage were brightly illuminated.  Crystal Fighters themselves were great fun – regardless of whether you knew a lot of their music, or like me weren’t overly familiar, every one of their songs made you want to dance as much as humanly possible.  The band encompassed the festival’s encouragements of fancy dress and were all dressed in native American style attire and head-dresses.  There were many people on shoulders throughout the entirety of their set, and even when the heavy rain started, people weren’t deterred – a sign of a successful headline set I’m sure.  Thus the first day of Secret Garden Party concluded.