Read more
You are at:Home»Live»Review: Little Mix at the Ageas Bowl, Southampton
By Bruno Russell on July 11, 2017 Live, Reviews
80%
80
Fierce

Little Mix proved that they have the power and that they can't be touched, as they rocked Southampton's Ageas Bowl as part of their Summer Shout Out tour.

In 2011, four girls were placed together by The X Factor in a make-shift band that most predicted would have as much longevity as similar acts (go on, try and name other X Factor girl-groups!) Little Mix, however, have proved everyone wrong. Off the back of their first UK Number One album, Glory Days, the girls rocked Southampton’s Ageas Bowl and proved why they are now one of the biggest girl groups globally.

A note first, though, on the opening acts. Ella Eyre was planned to perform but was a surprising no-show. There was no prior announcement and it seemed even the venue expected her to perform. I’m not sure what happened here. Shepperd, an Australian band, stepped up to the plate though. I’d never come across their music but they lit up the stage and had the audience clapping and singing along. Often opening acts fade as the audience awaits the main performer, but Shepperd held their own. I’ll certainly be keeping a closer eye on their music in the future. 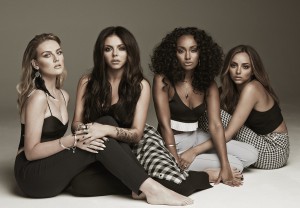 Little Mix opened in true performance style. With stunning visuals and a well-composed beat, they had the crowd screaming their name awaiting their arrival. One of the most spectacular elements was how visual they made the show. Their indoor arena tours are often praised for creative visuals and most worried this would get lost in an outdoor venue. The use of the backdrop as an opportunity to display pre-recorded music video shoots was clever and ensured that the girls were not swallowed up by the outdoor venue which eliminates the usual pyrotechnics they rely upon. I specifically loved the use of the lion’s roar at the opening, and the beam circle during ‘Touch’.

Little Mix bring a real energy to the stage and their upbeat numbers – such as ‘Shout Out To My Ex’ and ‘Power’ – combined powerful vocals with strong choreography. To bring a real sense of originality and flair, they also mixed up some of their most well known numbers. ‘Salute’ led into an encore of ‘Down and Dirty’ while ‘Wings’ had a vocally stunning acoustic section added, as well as an enhanced back beat. The result was a more mature version of a track that previously encapsulated their original innocence. Naturally, the group have matured and their sexy, sassy dance numbers play to this. ‘Down and Dirty’ perhaps belonged less in front of thousands of pre-16-year-olds, and more in the nightclub setting. They did, however, manage to keep it sophisticated and stylish without becoming overly sexualised.

What also came through more than previous shows was the emotional vulnerability that comes alongside the sassy-feminist power anthems. After dedicating the performance to their LGBT+ fans, the girls gave a first-class rendition of ‘Secret Love Song, Part II’, from their previous album, Get Weird. The performance seemed to have real, raw emotion behind it and looking around me, I could see many audience members who clearly connected to the song and the meaning behind it. Little Mix have developed an incredible ability to mix traditional high-energy pop with emotion and force. For me, this is what makes them the stand-out artists they are.

One disappointment, though, is that they removed three songs for the setlist from others dates on the tour (‘Change Your Life’, ‘Move’ and ‘Nobody Like You’). I’m not sure why else they would remove the songs, but it left some fans complaining that the show was “too short” at the end. Admittedly, it was still 75 minutes long, but this included dance and speech interludes. Add the missed out songs, and it becomes at least the more conventional 90-minute slot. I’m hoping, however, that they can rectify any disappointment here when their indoor arena tour kicks off in October.

What is clear is that Little Mix know their brand, and have a clear and impactful identity as an artist. They rose to the challenge of the outdoor arena setting and showed that – wherever they perform – they know how to put on a show. They may need to add a few more hits to their setlist and ensure their opening act shows up, but these pitfalls are easily rectified. To those that say that you’ve either got it or you haven’t, these girls have got it.

See a recorded version of the opening from the show, which shows off their use of visuals, below.