The magic of Glastonbury 2017 will live on long in the memory of this writer.

If there is a festival that can cater to everyone’s music tastes and offer much more besides, it’s Glastonbury. If you’re a party animal, then the likes of Block 9 and Shangri La are the places to go dancing away until the sun rises. Feeling politically fired up with a decidedly leftist viewpoint? The Left Field and Speaker’s Forum cover your interests here. Simply want to try out new crafts and skills or buy weird and wonderful merchandise? The Green Crafts and Green Futures areas of the site host the majority of this.

Not only does Glastonbury provide this and spectacular music sets from a whole array of artists and musical genres, but it also hosts circus, cabaret and more. My own non-music related highlights include discovering the 50p Tea Tent (yes, really!) and the Metamorphoses show at Arcadia. 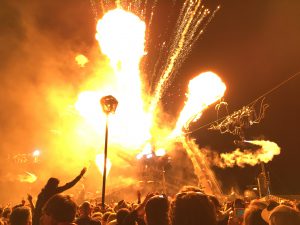 Seeing the giant mechanical spider of Arcadia transform from a DJ centre into a firework-producing and flame-throwing beast (see above) is an epic spectacle, with dance artists abseiling down to pick up (presumably) planted audience members and wrapping them up in cloth like a spider would with its silk and a fly.

Most amazing of all were the smaller mechanical spiders, somehow manually operated upside-down, creeping in on wires from three different directions towards Mother Arcadia spider. The dramatic music which accompanied Metamorphoses and the crowd made it one of the most atmospheric events of the festival. 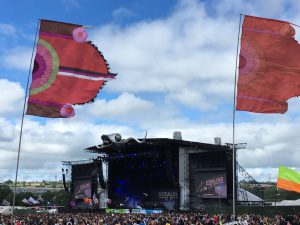 Regarding the musicians on show, the frequent clashes on my schedule of which artists I wanted to watch did make me long for the time when science enables the human body to split up into at least four different versions of oneself able to watch several artists concurrently!

I would like to think though, that I made a decent effort of seeing as much as possible, trying to discover newfound music interests as well as going to see the acts I know and love.

George Ezra I actually saw twice at Worthy Farm, once at BBC Music Introducing and then on Friday at the Other Stage. Ezra well and truly knows how to charm his audience, effortlessly schmoozing between tracks. His latest single, ‘Don’t Matter Now’, with a helpfully catchy chorus section, looks set to be a summer favourite.

Another solo by name artist, but with actually a large ensemble backing group, Rag ‘N’ Bone Man played a superb set on the Other Stage on Saturday. Showing genuine disbelief at the huge crowd he attracted, combining a clever use of special guests from his previous rapping days and choosing a broad range of his tracks, Rag ‘N’ Bone Man was a hit with this festival goer.

While indie pop band Blossoms on Friday provided great comic relief in adapting ‘My Favourite Room’ to a jilted audience member, their successors on Pyramid Stage, First Aid Kit, brought a hard edge to their set. Their latest single, ‘You are the Problem Here’, an angry response to the case of the Stanford University student whose prison sentence for rape was lessened due to his swimming potential, was made all the more hard-hitting by the haunting voices of the Swedish sisters.

Apart from the obviously nostalgic tribute act The Bootleg Beatles, the Acoustic Stage proved to be a gem for finding niche artists and developing talent. These ranged from Beoga, the Irish folk band providing the tune in Ed Sheeran’s ‘Galway Girl’, to Earl, a wonderful jazz and soul musician from Alaska whose track ‘Tongue Tied’ had my legs jiving away.

The best set by far at the festival which I saw, was at the Other Stage as Lorde was my shepherd in the Friday twilight. The choreography dancers accompanying most of the tracks, the hydraulically-operated window see-through cage, and the complete and total dedication in performance of Lorde made this a phenomenal set. When Lorde explained what she was trying to capture in ‘Liability’ – “the bottomless pit feeling of being the biggest loser you know” – and then performed it to the thousands-strong crowd dancing gently with their mobile flash lights, I felt as though I was witnessing and participating in a wonderful moment of Glastonbury history.  A future Pyramid headliner perhaps? 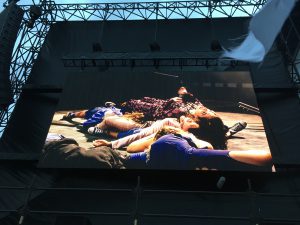 The one Pyramid headliner I caught was Ed Sheeran. Whilst I enjoyed hearing some of his earlier tracks which I have to admit, I hadn’t appreciated much before, he was nervous. Breaking guitar string in the middle of a track indicated this, but who can blame him considering the pressure as the ultimate solo artist, with just his vocals, guitar and pedalo on stage for all but one song. 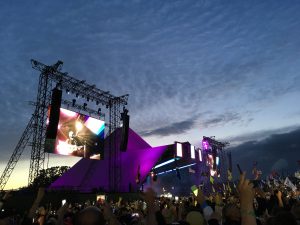 Leaving on Monday morning was a wrench. Although glad to be ending my days spent sleeping in a tent and hopefully escaping the by-then exasperating ‘Ohhh Jeremy Coorrrrrbyn’ chants, and looking forward to the luxuries of a flushing toilet, it was sad to be leaving Worthy Farm.

Glastonbury is truly the most magical music festival of them all.