Read more
You are at:Home»Live»Review: Jerry Williams at The Brook, Southampton
By Carly-May Kavanagh on June 18, 2017 Live, Local Music, Reviews
80%
80

Her clever lyrics and gorgeous voice made for a lovely gig, as well as fantastic support.

As someone who loves supporting local venues and local music (I actually have a whole column dedicated to local live acts), I ended up at Jerry Williams’ gig at The Brook. A venue I’ve never actually visited because the shows there have never been my preferred genre of music, so I was surprised to see they’d booked the 21-year-old indie singer/songwriter – and at last, I finally saw her at a gig outside of Surge Radio. She’s unsigned, funds herself and releases her own work, taking inspiration for songs from the lives of her and those around her. She has 3 EPs and was featured as Radio 1’s Introducing Track of the Week for ‘Let’s Just Forget It’, as well as BBC Introducing National Artist of the Week. So she’s a pretty big deal, and any chance to see someone before they blow up and become a star I’ll jump at.

Support came from Yeti Bianco and The Dead Freights – from Lymington and Southampton respectively, it was exciting to see that all three artists were local! Yeti Bianco are an electro rock band who really like their synths, and were very reminiscent of new-wave, synth-pop bands like Spandeau Ballet, especially with the lead singer’s voice. The Dead Freights describe themselves as a cross between The Libertines and The Beatles with influences from The Kinks, which is incredibly accurate of their sound. Their harmonies were incredible, with blues-tinged guitars and songs that the crowd really got into, which is always nice to see – it’s rare that a support will get a crowd as excited as the main act, but these guys managed it. 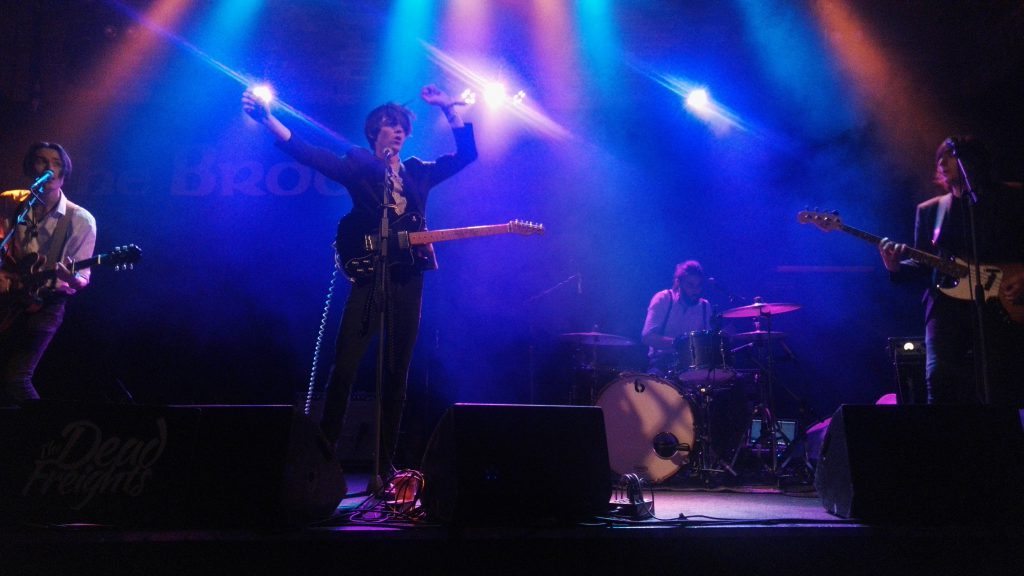 Kicking off with a song that’s amassed over 4,000,000 plays on Spotify, ‘Mother’ was the perfect start to continue the energy from The Dead Freights. Though seeming a little nervous to start with (she disclosed in the interview that it’s her first show in a few weeks), Williams found her groove as she continued into ‘I’m Not In Love With You’, her latest release and BBC Introducing Track of the Week in May. Excitingly, she was playing with a full band – she said when we talked before the show that she always finds it nice to play with one, but if she’s not playing the guitar she just doesn’t know what to do with her arms, which is understandable considering she started writing songs to be played on her guitar. The show was mostly songs from her existing EPs, including ‘Velcro’ and an acoustic version of ‘Boys Don’t Cry’, which just played on my love of women covering songs originally done by men and vice versa because it was a beautiful rendition.

Her setlist was varied in inspiration, from a song to a backing track inspired by a death in the family (‘Grab Life’, her next single to come out after being played in many of her recent performances), to ones about boys and dodgy ways of pulling and nights out. There was enough difference in the songs for everything to feel fresh and new (even if I have had all of her songs on repeat for months), and they all made for an incredibly excited crowd throughout. I don’t know if she was expecting for there to be chants for an encore because she didn’t seem to have a song prepared for it, instead playing ‘Mother’ which she opened with. If you get a chance to see her, I highly recommend doing so before she inevitably becomes a star selling out everywhere she plays.