On May 22nd, Manchester Arena suffered a terrorist attack, worse than anything seen in the UK for over a decade, following an Ariana Grande concert that night. 13 days later she returned to Manchester with a string of stars in her wake, to put on the most extraordinary show of love and respect in the face of terrorism. Although I wasn’t able to be at Old Trafford, I like many others watched the concert via the BBC who alongside many other services streamed it in its entirety live. What I watched was a concert that was an incredibly uplifting, inspiring, fun and emotional night. Its poignancy felt especially relevant given that the night before, we had faced yet another terror attack in this country.

Before Marcus Mumford opened up the night with ‘Timshel’, the audience took part in a minute’s silence in honour of the victims of the attack and their families. Given the immensity of Old Trafford and the fact that 50,000 people were in the stadium, the silence is overwhelming – there was no better way to open the night.

Over the course of the 3-hour long concert, there were a plethora of artists who came out and performed. From Marcus Mumford to Miley Cyrus, each artist brought something different to the night, though all were united in the common vision that Grande had for a night which reflected the love and unity of the nation in the face of these attacks. Some like Little Mix and Take That chose songs with lyrics that reflected the strength that they wanted the audience to embody – Robbie Williams changed the words to his 1998 hit ‘Strong’ as an ode to Manchester’s strength which was the first moment of the show to really move me. As the whole audience chanted this along with him, it was prayer-like – capturing the unnerving endurance of the city in this time. Others like Niall Horan and Coldplay chose to play their hits, demonstrating that this night was going to be fun just like every other concert, but also that we will not let these attacks change the way in which we do things. 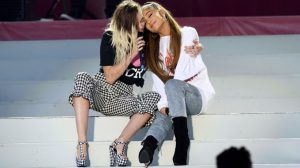 Grande herself performed paired up with various different artists such as Miley Cyrus for ‘Don’t Dream It’s Over’ and the Black Eyed Peas for ‘Where is the Love’: both songs with lyrics that perfectly said what the city needed to hear right now. Filling in for Fergie, Grande joined the Peas in their song that really encapsulates the state of our world. Of course, it’s a song that’s so well known too, allowing the crowd to join in, the bridge of “One love” especially apt. Following a meeting with Charlotte Campbell, the mother of one the victims of the bombing, She decided to include many of her hits on the night’s setlist including ‘The Way’, ‘Love Me Harder’, ‘Side to Side’, ‘Break Free’, the seemingly apt ‘Be Alright’, and ‘One Last Time’, the encore song from the night of the attack.

Some other stand-out moments for me were the Parrs Wood High School Choir singing ‘My Everything’ with Grande – they’re a local school choir who, when joined by Grande halfway through, gave a beautiful and unforgettable performance. Coldplay sang Oasis’ classic ‘Don’t Look Back in Anger’, saying that it was a letter from them, and subsequently the rest of the UK, to Ariana. As the whole audience sang, it truly did feel that way. It was especially moving, of course, given the special status that each and every Oasis song has with every Mancunian. Those words rang as a reminder to both her and us, “Don’t look back in anger, I heard you say.” And Grande impressively got Liam Gallagher to perform alongside Chris Martin, who he has previously slated pretty scathingly, in a rendition of ‘Live Forever’. The lyrics of the song as well made it a fitting tribute to the victims.

The whole night was a beautiful show of solidarity: it was clear on the audience’s faces that they were having a great night, and it was clear from each and every artist that they were honoured to be a part of this. Although some artists were definitely more gracious than others (Miley Cyrus’ speech kinda felt like she was making it about herself, and Katy Perry read her inspiring message straight off a teleprompter), the overall atmosphere was a really beautiful, light and positive one. Especially great was the attitude of Grande, who has shown herself to be such an inspiring figure, not just to those of us who were already her fans, but to the nation over. Even little things, like the fact that she didn’t feel the need to change outfits all night, but remained in her jeans and jumper throughout, were a symbol of what this concert meant to her: this wasn’t about her in any way. It was about music, and love, and community, and showing that we are strong even in the darkest of times.