Read more
You are at:Home»Live»Review: All Time Low at O2 Guildhall, Southampton
By Sophie Trenear on March 20, 2017 Live, Reviews

A band like All Time Low need little introduction, and it is a testament to their commitment and passion that after almost fourteen years of near-yearly touring that they still sell-out shows globally. Having risen to pop-punk idol status, and with a new album, Last Young Renegade, just around the corner, it’s little more than unsurprising that by the time 12pm rolls around, the queue outside Southampton’s own O2 Guildhall already snakes around the corner. Somewhat of a diehard ATL fan myself, and having arrived at no later than the sunrise-soaked 7am, it would be a lengthy twelve hours – but damn it, if it wasn’t worth every minute.

Waterparks, support act No.1, proved to be nothing less than an impressive bit of fun, giving the crowd a snapshot of their accomplished (though unfortunately short) discography. The trinity came into their own as a handful of the crowd danced like nobody was watching, screaming lyrics back to a surprised “ah, so a few of you know it” from frontman Awsten Knight during the peppy ‘Crave’. Unfortunately partly losing his voice during the stupidly high ‘Stupid For You’, Waterparks still gave it their absolute all and revelled in their performances of ‘Mad All The Time’ and the anthemic ‘Royal’. Swmrs, up next, also gave an incredibly energetic performance, but offered little to remember apart from their catapulting of themselves across the stage, and an impassioned rendition of ‘Miley’. 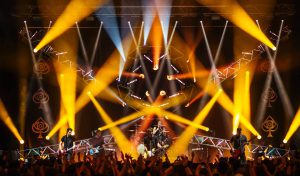 And so it came to All Time Low’s turn to grace the Guildhall stage, and they did with nothing less than a bang. The roar of the crowd was, actually, rather fitting as the Baltimore-born boys dove headfirst into ‘Kicking and Screaming’. A fantastic opener, it proved itself quite the match for ‘Weightless’, that one All Time Low song that everybody who’s anybody knows, which, quite rightly, finally took a back seat in the band’s setlist to let their newer work shine. ‘Somewhere in Neverland’ rose to the challenge, the second of what would come to be one of All Time Low’s most random but well-chosen setlist in their fourteen years of being.

“Please say happy birthday to my baby,” frontman Alex Gaskarth said, before plunging into the song which launched them: ‘Six Feet Under The Stars’. This was the moment for the long-time fans, a thank you from band to fan made all the more heartfelt by the sudden fervour of the crowd. It’s hard to tell who the song means more to, the band who gave it life, or the fans that made it iconic.

Perhaps both, as ‘Cinderblock Garden’ launches the crowd’s energy into overdrive. ‘We could make forever after all,’ Alex chimes, and, fortunately, it isn’t hard to believe. All Time Low have the kind of band-fan connection that other fanbases can only dream of. It might be the adrenaline, it might be the gratitude, but as the boys throw themselves into ‘Something’s Gotta Give,’ it’s hard to think of many other bands that have as much stage presence as them. “This one’s for you guys,” Alex says before its drumbeat kicks off, and as one of the night’s biggest highlights, it really did seem like something special had struck the air. A fuse had been lit, and the night was only beginning. 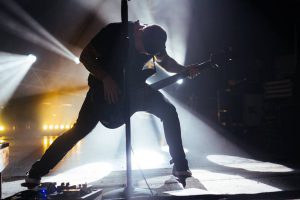 After a wild ‘Kids in the Dark’, it was time to turn all heads towards All Time Low’s future, specifically their new album Last Young Renegade set for release this coming June. New single ‘Dirty Laundry’ and the Future Hearts-era standalone ‘Take Cover’ mark a slight change in direction for the guys, and whilst the former “may not please those alienated by the new sound,” as our review said, seeing it live makes its purpose deafeningly clear. ‘Dirty Laundry’ was a song made for the stage. And paired with a glittering light show and some slick dance moves from Alex, it could easily become a universal favourite of the night.

I would say I’m not one to cry at gigs, but I definitely am. I cried when Fall Out Boy played my favourite song in 2015, I cried when Panic! At the Disco played ‘Bohemian Rhapsody’ in 2016, I even cried as soon as Gerard Way walked on stage in 2013. But I have honestly never blubbered as much as when Alex Gaskarth played a solo, acoustic version of ‘Therapy’. Lighters and illuminated phone screens dotted the building, a whole crowd united by one impassioned voice. It was, genuinely, a beautiful moment. And major props to Alex who carried the song solely on the strength of his vocals, with a little help from an acoustic guitar and a wholly moved audience.

“This is a song about addiction. And that’s any kind of addiction. Just know there’s a light at the end of the tunnel, there is a way through it, there is a way out. Do not give up the fight. Everybody here in this room is with you. Remember that.” There couldn’t be a more fitting introduction to ATL’s beloved ‘Missing You’, proving the boys to be masters of the change of pace. Jack and Zack sat on the ledges of Rian’s drum set, strumming happily away, a considerable difference to the vehemence of ‘A Love Like War’ and ‘Backseat Serenade’ which followed, before Alex shed his guitar to take on ‘Take Cover’, strolling boldly across the stage’s forefront as their crowd gets littered with confetti. If there’s anything these boys have proved, it’s that they’re absolutely ready to take on the world.

But not before they take on their well earned encore here in Southampton. ‘Lost in Stereo’ comes first, a whirlwind of a throwback, before the first note of the long-awaited ‘Dear Maria, Count Me In’ hits the air. As their usual closer, the song must have been played hundreds of times on countless stages, but there’s no trace of weariness in their faces. In fact, they seemed ultimately in their element, and so this it; Alex, Jack, Rian and Zack, after their longest break from touring, are really and truly back. Old songs and new songs alike, for them, what they do is what they love. And thank god we love it too. In fact, we couldn’t love it more. Bring on Last Young Renegade, boys, it cannot come soon enough.