The X Factor is a staple of Autumn television, and while I enjoyed the show last year, I was unsure how the acts would perform on the big stage. I left, however, impressed. Though there were some questionable performances (namely Honey G and Four of Diamonds), the rest delivered some outstanding showmanship and vocal prowess as a declaration of their talents and promise for the future.

Without doubt, Saara stole the show. Her majestic voice radiated throughout the BIC and her renditions of ‘The Winner Takes It All’ and ‘Everybody Wants to Rule (The World)’ captivated the audience, with astonishing high notes and vocal control. Saara also understood the art of performance, with her renditions of ‘Bad Romance’ and ‘Diamonds Are A Girls Best Friend’ being re-mixed to add points for powerful vocals, set against a strong production which clearly represented the concept Saara wanted behind the music. Sam impressed vocally with a unexpectedly promising rendition of ‘Impossible’ which she managed to control, even if it did become a little shreaky on the final major high. 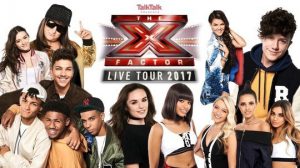 The show line-up. (Image via ITV)

On the other end of the scale, Honey G failed to impress. I was a fan of her on the show, but her character didn’t work when projected into the arena. Firstly, she has surprisingly little stage presence and faded in to the background against the production. There were times when I struggled to hear the rap, and others where I hoped we could stop the Butlins tribute and move to a better performance. Even the audience, with her devoted ‘Mini G’s’, failed to sing-along, only picking up when she provided a rendition of her single ‘The Honey G Show’ (It got to #149 on the charts, I would not recommend checking it out). Annoyingly, Four of Diamonds also faded. Their rendition of ‘Royals’ was plagued by a failure to harmonise properly (which I hope was just a mistake on this night), while their performance of ‘Ghost’ was just  uninteresting. They certainly don’t have what it takes to be the next Little Mix or Fifth Harmony.

5AM, however, were amazing. They were full of energy, and provided some vocally slick performances, which commanded the stage with well-thought out and timed dance routines. The only shame is we did not see them expose their vocal at any point. Thankfully, Emily’s vocals were given a chance to shine as her rendition of ‘That’s What Makes You Beautiful’ and ‘Creep’ were slowed down to not only give variance to the show’s performances but to expose the vulnerable dimension of Emily’s voice. Her performance of ‘Creep’ was especially cultivating as she simply lay on the floor and sang. Her boyfriend, Ryan Lawrie, meanwhile was nothing special, though better than I expected. His performance of ‘Twist and Shout’ was energetic with a solid vocal, even if he did have a habit of remaining on the side of the stage – his rendition of ‘Perfect’, though, was bland and vocally did not match up to his other performance. Emily and Ryan also performed ‘Wings’ together though, for all the sentiment behind it, Emily’s vocals outperformed Ryan. 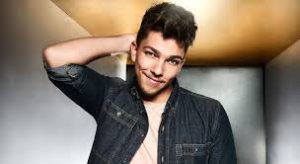 Of course, we could not forget 2016’s X Factor winner: Matt Terry. While the other seven acts swapped every couple of songs, Matt was given his own devoted set at the end, and he owned it. Starting off with ‘I Put A Spell On You’, he captured the audience. He showed an oustanding vocal control and, even though his vibrato increased too much at times, he showed his potential as a star of the future. Even his rendition of ‘When Christmas Comes Around’ got everyone swaying along (in March… don’t make me think of Christmas!), while ‘Writing On The Wall’ was simply astonishing: it commanded the stage and showed that Sam Smith better watch his back.

Away from the acts themselves, the performance value was very good, with the dancers showing no sign of energy loss and fatigue and adjusted well to the ‘high-energy’ of 5AM, the quirky choreography of Saara and the more seductive routines required for Matt. The sound and lighting were impressive and made it appear like the audience were watching the acts during the finals (which, considering the BIC was full of X Factor fans) was conceptually quite clever. The performance order made sure the whole show remained dynamic and varied, while video interludes also gave the whole show a sense of narrative.

Overall, The X Factor live tour was impressive with powerful and vulnerable vocals, energetic dance and strong production value all on show. If I were rating it, the result would be three-stars with further potential. Annoyingly, Honey G and Four of Diamonds pulled the whole performance down, and without Honey G’s cheesy additions, it would have achieved four-stars. I’ll be generous and presume Four of Diamonds just slipped on the night. As for Matt, Emily, 5AM, and especially Saara, after last night I am sure they have all got very promsing careers ahead.

Watch a taster of the show, Saara’s performance of ‘Everybody Wants to Rule (The World)’, below.

The X Factor Live Tour continues around the country for the next fortnight, concluding in Brighton on the 18th March.