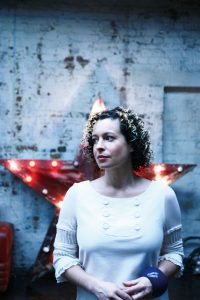 Widely known as the ‘Barnsley Nightingale’, Kate Rusby is one of the nation’s most beloved contemporary folk singer/songwriters. Self-assured and ambitious, Kate’s career is ever-growing; from a Mercury Prize nomination in 1999 and Best Live Act 2006 for BBC Radio 2 Folk Awards, to her current home-grown record label ‘Pure’ and local festival ‘Underneath the Stars’. Halfway through her Christmas tour, she sets up camp for a magical evening in Salisbury City Hall.

Just a few months following her newest album release, Life on a Paper Boat, the admiring audience were readily perched on their seats, giving Kate and the band the most enthusiastic welcome. Kate radiated warmth and her presence was that of a good friend; taking a break between each song to give some background to the songs, and telling silly anecdotes in her Yorkshire lilt, cup of tea in hand. At times this gave the show a stand-up feel, with the audience rapturously laughing in between songs. Fortunately, this did not fracture the flow of the show, as Kate had the audience in the palm of her hand, easily transporting them into a dreamlike state as soon as the music began.

Her pure, silken vocals were even more surreal than in recordings, intertwining the joyful and melancholy almost as if in lullaby. Kate’s live sound was indeed as natural as birdsong, it is no wonder she earned her nickname. The band of merry musicians, involving “the brass boys”, accompanied her perfectly, creating an uplifting, emotive sound as an ensemble. Even when Kate left the stage for an instrumental break, the band maintained the mesmerised attention of the audience by sweeping them away in various arrangements, highlighting the particular talents of each musician, particularly Damian O’Kane on banjo and Nick Cooke on melodeon. The simplistic beauty of ‘The Frost is All Over’ was a favourite, as its soothing melodies painted pictures of fresh morning snow and twinkling Christmas lights.

A sense of home and location is intrinsic to Kate Rusby’s music, and this emanated from her performance. She spoke lovingly of her hometown and other parts of South Yorkshire, whilst within song she delved into the wild, rural Bradfield in an arrangement which mingled the old with the new. Throughout the night, she spoke of parts of South Yorkshire and Cornwall, where pubs hold the unlikely tradition of singing  a “treasure chest of carols” rejected by the Church, with a heavy flow of beer and merriment. She embodied this tradition in her contemporary performance of these carols with the greatest joy, and truly flooded the room with Christmas spirit.

This concert proved that Kate Rusby deserves all of her recognition and more; a concert of hers is a charming, magical and warm experience which celebrates music in a fusion of traditional and contemporary. This show is a welcome addition to the annual Christmas routine, and is the perfect replacement of the typical carol concert or pantomime.

Kate Rusby continues her Christmas tour of the UK until the 21st December, and picks back up for another UK tour in May 2017. Tickets are available here.