Read more
You are at:Home»Live»Review: Panic! At The Disco at Alexandra Palace, London
By Max Perry on November 22, 2016 Live, Reviews

Panic! At The Disco’s loyal tribe of fans followed them as they experimented with various styles and eventually dwindled down to only the frontman, Brendon Urie. The crowd at Alexandra Palace was a surprising range of ages, from parents with children and young teenagers to an older, more seasoned audience, wearing shirts from the band’s very first tour.

The best thing about the venue was the huge array of food options available, including wood-fired pizza in the popular Festival Village, along with a cocktail bar and burritos, keeping the crowd’s attention until the setup on stage pulled them to the pit.

The supporting act, an excitable group called Tigertown, enthusiatically launched into their set. The lead singer glittered but her voice was a little too shouty for my taste. The music itself was enjoyable enough, though, synths filling the room and beats that got the crowd dancing along. 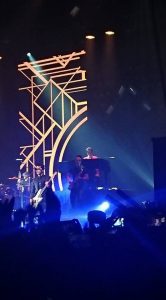 Soon it was time for the main event, the crowd becoming more subdued after Tigertown left the stage. Eventually, lights appeared and a cheer went up; as soon as Brendon Urie launched himself on the stage the atmosphere was electric. The set opener, ‘Don’t Threaten Me With A Good Time’, was delivered with aplomb, Urie’s red jacket announcing itself as his voice filled the room.

Every song in the set list was laden with falsetto twists, making the live experience so much richer than listening to the album would be. Alongside his excellent vocals, a brass trio added a layer of depth to the experience. His voice traversed an impressive range with ease, and every time his voice reached new peaks you could feel the crowd’s reaction.

There wasn’t a dull moment throughout the set, not a single song fell flat. Particular highlights of the first half were ‘The Ballad of Mona Lisa’ and ‘Girls/Girls/Boys’, an LGBT+ anthem that had the crowd reach new levels of enthusiasm. Throughout the gig Urie maintained incredible levels of energy, leaping about the stage as the spectacular light show enhanced him. Tossing his hair as he moved, the lights cast a huge silhouette of him on the wall that was hard to take your eyes off of.

When ending his performance of ‘Crazy=Genius’, Urie showed off his musical versatility by taking part in a drum-off, creating a speeding crescendo that delighted the crowd. In fact, it seemed almost impossible for Urie to disappoint the crowd at this point, performing the occasional backflip when he wasn’t crooning into the mic.

‘Bohemian Rhapsody’, which the band recently covered for the Suicide Squad soundtrack, was announced with a flourish: “This is a song I didn’t write, but I wish I did.” A piano appeared on a raised platform at the rear of the stage and Urie, still wearing his red jacket, took his seat. Once again, his voice performed, adding elegant flourishes to the well-known song, and the pared back staging worked well for the band. Midway through the song, he launched himself forward and sang with fervour, the audience singing along with just as much power. 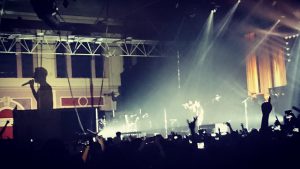 He returned to the piano to conclude with a flourish, before leading into his next song, the bluesy title song of their latest album, ‘Death of a Bachelor’. This too, he introduced with a joke. “I wrote this song for Frank Sinatra, but apparently he’s dead.” The song was more vibrant live, greatly enhanced by the brass trio and Urie’s falsetto alterations.

As the set began to draw to a close, there was a little less enthusiasm from the crowd during ‘LA Devotee’. Throughout the show, Urie expressed his gratitude to the audience for coming, and offered quips while introducing the song.

The introduction to Panic! At The Disco’s first big hit, ‘I Write Sins Not Tragedies!’, was already playing when Urie spoke: “This is a new one that we haven’t released yet, so don’t worry if you don’t know it.” Urie seemed full of spirit as he moved around the stage while the crowd screamed, wearing only a black t-shirt and jeans, singing his most well known song. There was a somber moment afterwards as he briefly spoke about writing ‘This Is Gospel’ for his former bandmate, Spencer Smith, who left the band after struggling with addiction. It was an emotional performance, but still full of vigour.

Before closing the show, Urie once again announced his gratitude to the crowd, telling the whole room he loved them for coming, for listening, and for being fans. The show ended with a triumphant performance of ‘Victorious’, and the crowd was still buzzing as the lights came up and the venue began to empty. With just one night left on Panic! At The Disco’s UK tour, the performance was an exhilarating success.

Panic! At The Disco toured throughout November.