Oh Jimmy Eat World; the source of so much of my adolescent angst, the crossroads of all bitterness and acceptance. The symbol of the hot perplexity of the ‘growing-up’ conundrum, as thousands of teenagers thrash out to ‘The Middle’ on Guitar Hero, standing steadfast in their living rooms, adamant that, indeed, ‘everything, everything will be just fine’. Integrity Blues, released October 21st, marks the iconic alt-emo-rock band’s 9th studio album, having released their break-out hits ‘Bleed American,’ ‘Sweetness’ and ‘The Middle’ all the way back in 2001 – and what fantastic progress they’ve made. Free of dramatic hiatuses (ahem, Fall Out Boy), bereft of fleeing members (ahem, Panic! At the Disco), and in the limelight just enough to keep fans happy by playing a mix of both old and new songs, far from abandoning their roots but straying far from a reliance on them, Jimmy Eat World may just be one of the most down-to-earth bands alive today. And headed on the last of a long string of UK tours, the UK Integrity Blues tour kicked off with three clicks of a drumstick and a bang right here in Southampton…

Launching straight into a new favourite, the pulsing, rhythmic drum beat of ‘Get Right’ kicked off the night, lead singer Jim Atkins already wild, propelled by the pounding cheers of his audience, the band dove directly into ‘Bleed American.’ Hot and hasty, the crowd spat out the defining lyrics of a world 15 years ago, mimicking the buzzing energy of the band above them. 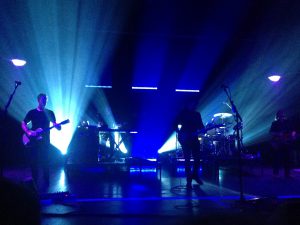 ‘Hello Southampton!’ Jim hollered out after a few hits, ‘We’re Jimmy Eat World from Mesa, Arizona!’ And, seemingly taken a little aback by the cheers meeting him, he looked genuinely delighted to be here. After releasing almost ten full albums and embarking on innumerable tours and shows and gigs over the course of nearly a quarter of a century, it’s a little easy to imagine the guys a little fed up, a little less interactive, a little more just ‘going through the motions.’ But that just isn’t the case with Jimmy; every song played with fiery electricity and buzzing intensity, seemingly grateful for every single fan that showed up; smiles and waves all round.

Whilst ‘You Are Free,’ another newbie from Integrity Blues, united the crowd in – what was then – a world on the edge of crumbling into historical backwardness with a celebration of love and freedom (“and it’s whatever you think that means”), ‘Pass the Baby’ really shone out, being even better than its recorded version; its monotone vocals melting into pulsing electric currents, sending the crowd into a shrugged, discursive frenzy. 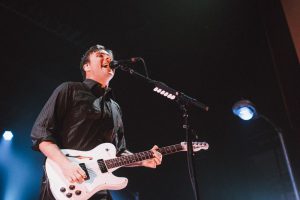 ‘You with Me’ being one of the highlights of the night, closely followed by ‘Blister’ being introduced by Jim referring to the song’s lead vocalist as his ‘work buddy’ (“This is my good friend Tom over here” “Actually we’re colleagues, Jim” “Okay this is my work buddy Tom over here. We’re work buddies”), the real peak of the night came as the band dove into the sparsely played, sparsely known ‘Lucky Denver Mint.’ As its clattering snare-bass drum intro kicked in and the dizzying riffs and vocals shot out, something in the air changed. This was what it meant to be euphoric.

Finishing their set with the raw, enraptured 2004 Futures effort ‘Pain’, Jimmy strayed off stage, knowing full well the thundering cheers and applause would bring them straight back just mere minutes later. And that they did, with smiles on their faces and sweat dripping off their reddened foreheads, taking a nosedive straight into the song we had all been waiting for: ‘The Middle.’

Thick, crazy and pointblank ecstatic, Jimmy Eat World’s first encore song plunged us all back to those adolescent, early teenage years in a whirlwind of feel-good riffs and stirring lyrics. And for three and a half joyous minutes, we were thirteen, fourteen, fifteen again, and I couldn’t be happier. Followed by the new ‘Sure and Certain’ and finally ‘Sweetness’, the crowd broke loose and all calm was destroyed.

Waves and glorious smiles and heartfelt ‘thankyous’ broke loose from the lips of the band as they finished their Southampton set – and wow, just wow; “what a dizzy dance” that was, indeed.