Read more
You are at:Home»Live»Review: Bastille at BIC, Bournemouth
By James Barker on November 1, 2016 Live, Reviews

I’ve made no secret of my love for Bastille’s second album, Wild World, released this September after three long years of waiting. It’s a reflection, a reaction to the chaotic state of the world right now, where you can’t predict the news from one day to the next. Contextual, different, and above all, liquid gold to the ears – the only thing that could push Wild World up to the next level would be to see it live. And luckily enough, The Wild World Tour kicked off only a 20 minute train journey away, at the Bournemouth International Centre.

The atmosphere at the BIC was certainly one of peculiarity, partly due to the odd mix of fans gathered there. People of all generations queued to enter the concert venue, from five-year-olds skipping around in Bastille t-shirts, to some who looked about two generations too old to know the indie-pop band. I suppose odd is Bastille’s forte – a fact only supported by the bizarre yet brilliant concert that followed. 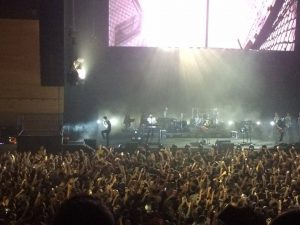 The crowds in the BIC. [Credit: James Barker]

The chattering of excitable fifteen-year-old teens was cut short by the booming voice of an announcer. The image of an odd cross between a British broadcaster and Ron Burgandy lit up the BIC’s huge screens – and as the newscaster acted terribly, insulting his cameramen and throwing biscuits, before “switching on” in a moment to become the charming, booming host voice of the concert, it was clearly another satirical statement from Bastille. It’s on message with their album, where they critique how “there’s nothing quite like seeing the world / through the TV’s window”.

He shouts a welcome for the first supporting act, Childcare, and a flamboyant topless man bounces onto the stage, with the vigour and swagger of a veteran performer. Perhaps a little too enthusiastic, he threw the contents of multiple water bottles onto an audience of what were undoubtedly largely first-time concert goers, fifteen-year-olds stone cold sober and unhappy at being soaked at a little after 8pm. Nonetheless, Childcare were a nice introduction to the concert, slightly more rock than indie, save for a sole female singer, who was far underused and pushed aside by the eccentricity of the lead singer.

The second supporting act, Rationale, I had heard before, as he had collaborated with Bastille on one of their lesser known mixtapes, ‘Other People’s Heartache’. A turn in the other direction to a more vocals-focused performances, Rationale was far better received by the audience, and gave a great performance that left me wanting to hear more. At the conclusion of his half-an-hour slot, the anticipation was at breaking point – the grumpy newscaster shuffled his newspapers, casually interrupting conversations every now and again with a countdown to the arrival of the main act. 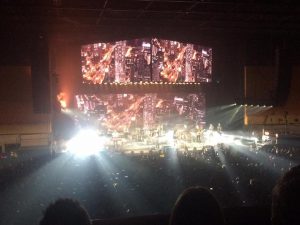 And when Bastille did explode onto the stage, they did it with style. In keeping with the use of the newscaster, the huge billboards around the stage were used to tell a colourful, poignant and contextual story, moving the message of Wild World up a whole other level. Their set began with the wonderfully poppy ‘Good Grief’, moved into some of the lesser known but equally great tracks on Wild World, and then back to some good old Bad Blood classics such as ‘Things We Lost in the Fire’ and ‘The Weight of Living (Part II)’. Each song displayed a new story alongside it, from mesmerising 80s artpop images, to the return of the newscaster for some excellent lip syncing.

If you could drag your eyes away from the vibrancy of the screens, Dan Smith and co. gave quite the performance on stage. Though he noted continually “My dancing isn’t great”, Smith kept the audience engaged, at one point sparking a group “jump” (getting everyone to the ground and then having them leap up in sync), and even moving through the standing crowd singing to everyone’s excitement. At no point did the vocals or backing instruments falter – a seamless performance from Bastille and co. 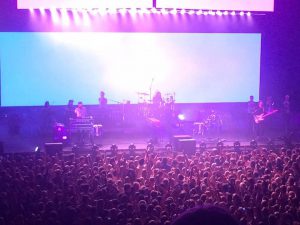 The night seemingly ended with a reprise of ‘Good Grief’, and then a farewell from the newscaster. Just as hearts across the audience began to sink, Dan Smith suddenly appeared high above the standing crowd on a side balcony, heralded like an angel by a bright spotlight, all while soulfully singing the lethargic ‘Lesser of Two Evils’. As he had humorously noted earlier in the night, “We hide a lot of depressing songs in upbeat melodies”. Though there’s nothing remotely cheerful about ‘Lesser of Two Evils’.

The band then ran back to the stage for a final performance of the classic ‘Pompeii’, with both Childcare and Rationale joining them on stage for a end-of-show spectacle like no other. Even the people in the seated areas were up on their feet dancing, wailing “AY AY OH AY OH, AY AY OH AY OH” at the top of their lungs. This was a performance to be remembered, impeccably perfect considering it’s only night one of what will surely be a very long tour for the band. Bravo, Bastille.