Read more
You are at:Home»Live»Review: You Me At Six at O2 Guildhall, Southampton
By Sophie Trenear on October 26, 2016 Live, Reviews

“It’s been a long time coming…” the Surrey-born quintet started on their social media just over two months ago, “18 months ago was the last time we played for you and we have been locked away making an album that we think is our best yet.” The return came totally out of the blue, with the band’s fourth studio album, Cavalier Youth, making its debut a year and a half prior to meet mixed reviews and a whole ton of other freshly released albums which would go on to perform better than it. Although catapulted to sit snugly in the chart’s number one spot, after its hit single ‘Fresh Start Fever’ was released, Cavalier Youth would melt away, its edgy sound-distortions and gritty lyrics dissipating into the alt-rock void, along with, it would seem, You Me At Six themselves.

Fast forward 18 months later, and the boys are back. With the announcement of Night People, their fifth studio album, dropping early next year, the release of its first, eponymous single, and a UK/European tour – not to mention the secret sets they wowed the unwitting people of Reading and Leeds festival over the summer, mere days after the announcement of their return –  You Me At Six have propelled themselves straight back into the rock stratosphere they so swiftly left nearly two years ago. “Over the past 10 years there has been so many special moments, and we can’t wait to play up close and personal with you again,” the group said, “We’ve missed you, let’s do this.”

And so the day came when the You Me At Six tour bus finally reached Southampton. The O2 Guildhall, the biggest and most sought after venue of the city, stood in a cloud of wind and light mist as crowds began to meander around the building in the chilly early morning of Sunday. Perhaps anticipating that Southampton is no central London or perhaps taking a peek at the weather forecast and deciding not to brave the biting cold, the crowd, shivering and tired-eyed, only began to lengthen beyond 20 odd people almost just an hour before doors opened. Early morning risers, bemused and trying to gage how sold-out the show must really be with only a barrier’s worth of people apparently attending,  would quickly gather their things, assemble into a queue and hurry inside to where the barrier stood, a mere meter from the intimate stage it guarded. 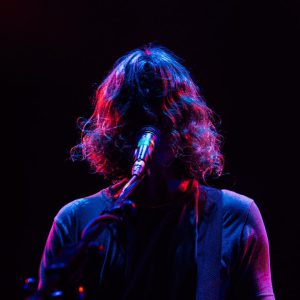 An hour later and You Me At Six’s support darted on stage. Disheveled and unknown, Vant dived straight into their set, five or so songs with the electric-buoyancy and hidden depth to strike a chord with the audience. Half an hour of some genuinely good fun later, and they darted straight back off, looking genuinely thrilled to have played such an extensive tour with one of the UK’s biggest and best bands. Look out for Vant, it’s only a matter of time before their eco-warrier, indie-rock vibe will emerge on the main streets, set to conquer the ever-elusive rock n’ roll realm. I guarantee it.

Songs with a tempo of less than 135BPM aren’t really sure-fire hits for a band’s intro song, so when ‘When We Were Younger’, the raw, emotional, 128BPM final song from 2011 effort Sinners Never Sleep began its discursive, meandering opening netted with piano like water droplets and synths like flatlines, an air of mystery and intrigue settled over the building like the dimmed lights that faded You Me At Six frontman Josh’s presence. He hung over the microphone, hood-up, alone, waiting for his cue to growl those first soft, low lyrics. As he did so, the lights seemed to cast a web over him, illuminating a vague outline but keeping him in the shadows as he drawled the first verse before the song picked up and the other members joined him on stage. The light show going mental, the crowd mimicking its energy. 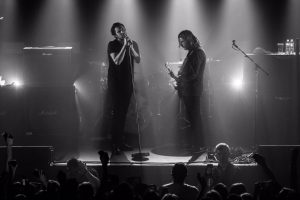 Diving straight into ‘Bite My Tongue’, the crowd making up for the lack of Oli Sykes with their own raw, biting ‘fuck you’s’ complete with a myriad of middle fingers held up to the drum’s beat. With the safe vocals out of the way with the first five songs, it was unclear whether Josh would be able to hit those piercing high notes of ‘Stay With Me’, having settled into the grungy, growling tone of the first few, but the tension was to no avail. He hit them, and he hit them well, spurred on by the ecstasy of his audience.

The perfect set-time, although made up with an odd mix of songs and including a big fat zero songs from their acclaimed debut album Take Off Your Colours (a distinct lack of ‘Save It For The Bedroom’ and ‘Jealous Minds Think Alike’ making it hard to believe the group haven’t completely abandoned their roots),  YM@6 made up for their haphazard setlist with a whole heap of chatter, banter, and pep talks to rival even that of Pete Wentz between songs. “Put your middle fingers up to the world because the problems that penetrate your lives can’t get you tonight!” Josh implored his audience after telling them to turn around and wave at the outside world behind the doors, followed by the obligatory anti-Trump rhetoric that’s been hanging around the mouths of rock bands all around the world in recent months, and rightly so. Really riles crowds up, apparently.

And so the night ended on a high. Whilst sure-fire hits like ‘Underdog’ and ‘Loverboy’ were definite, inevitable highlights, the real stand-outs of the night were inarguably ‘Reckless’, ‘Too Young To Feel This Old’, and first encore song, ‘No One Does It Better’ (dedicated to Josh’s parents who were in the audience), showcasing just how far these Surrey-born boys have come in eight years, and, finishing with new song ‘Night People’, just how far they’re prepared to go now.