With extensive touring experience, Scottish indie-rock band Twin Atlantic are no rookies when it comes to delivering an unforgettable gig. And their most recent appearance at Portsmouth’s Pyramids was certainly no different.

As their current tour comes in support of their new album ‘GLA’, the band launched straight into the first quirky, raging track from it, ‘Gold Elephant: Cherry Alligator’. It was a great choice to open with to get the audience buzzed for the rest of the gig. After a couple more tracks from ‘GLA’, which has a much rock-ier edge to it than previous albums, loyal fans were treated to an abundance of classic oldies. ‘Free’ and ‘Crash Land’, two slower, more emotional tracks back from 2011, induced by far the most nostalgic atmosphere, as lead singer Sam McTrusty allowed the crowd to sing part of the lyrics to him. 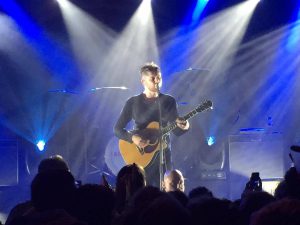 With a truly impressive 18-song set-list, it was clear that Twin Atlantic wanted to give their fans as much as possible. Although ‘Heart and Soul’, the track which first made their name and took me back to Reading 2014 when I first saw them live, was as exciting as ever, another personal highlight from the night was ‘Mothertongue’. This delicious dark horse of a track from ‘GLA’ was stripped-back to basics (just one guitar) in order to really heighten McTrusty’s striking vocals. It is still impossible to decide which version is better.

Whilst the band gave a remarkably cool performance, the audience was definitely rather the rowdy type. Only just into the second song, a fight broke out in the crowd and the band were forced to stop and re-start. However, after it was all sorted out, McTrusty was merely amused: ‘You’ve got me on my toes. I’ve come here to watch you’. People also seemed very keen to mosh to every song, appropriate or not. Two girls even pushed their father into the midst of it all (he seemed to enjoy himself in the end). Yet for this petite 5”2 girl who values the use of all her limbs, having to concentrate on getting out of the way each time, rather than just focusing on the music, was frankly a little tiresome.

McTrusty came to the conclusion that there was nothing to do, but to embrace the madness. During the night’s final song ‘No Sleep’ – a powerful new track, likely to be the new favourite of any fan – he threw himself into the crowd. His final words, ‘For now, please stay fucking weird’ aptly summed up the Portsmouth audience.

Twin Atlantic proved brilliant at adapting to whatever crowd they were faced with and genuinely caring about their fans having a great time. Which we definitely did.