In the beautiful and intimate St John-at-Hackney Church in North London, Emeli Sandé delivered a flawless show that allowed her to re-connect on a personal level with her fans. The show formed an emotional and powerful narrative that led you through Sandé’s musical journey and the relationship she has fostered with her fan base. With a mix of old songs and exclusive unheard material from her upcoming album Long Live The Angels, the evening was a perfect restatement of Sandé’s music prestige after three years away to develop her new music and overcome personal battles.

Sandé, in previous interviews, said she would perform in small venues because she “really wanted to reconnect with [her] fans on an intimate level… and these small shows felt like the perfect way to catch up“. Without a doubt this whole-heartedly came through; there was a real sense that Sandé was not performing for money or fame, she has a message to pass through her lyrics and her passion and she shares that with her fans.

It’s safe to say that Sandé showed off her extremely powerful vocal at several points. This was most noticeable during ‘Happen’ – one of the new songs – and fan-favourite ‘Read All About It’, where Sandé had the whole audience participating in a sing-along that really emphasised the community and family spirit emphasised throughout the set. During ‘Highs and Lows’ Sandé explained how ‘she fell in love with music’, accounting her belief in the power of music as an emotionally connecting and uplifting tool. Sandé also performed some of her more upbeat numbers and linked them to the narrative. This included her famous ‘Next To Me’ and another of her new numbers ‘Babe’ which she described as about ‘having a refound confidence in yourself’ as you realise that ‘there will be, sometime, another person you can call babe’. The song had an upbeat and heartfelt optimism to it; an innate strength that was fun and masterfully portrayed. 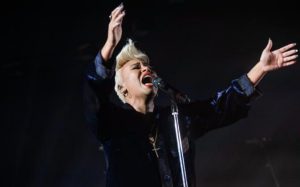 A live shot from the show. Photo credit: REX

This optimism was also carried through with ‘Sweet Architect’ which, though stripped back vocally, is about the importance of faith and Sandé’s own realisation that while our journey may not always be easy, we are lucky with the value our lives hold thanks to the ‘Sweet Architect’.  She said afterwards: ‘this one is for you, because without you I could not be here’. She didn’t mean that in the commercially viable sense but rather that her fans make her strong; her fans are the reason that she battled to return with new music. The show felt like a heartfelt thanks for that dedication. This was all topped off with her brand-new single ‘Hurts’ and a fantastic acoustic cover of Rihanna’s ‘Four-Five Seconds’. ‘Hurts’ became the epitome of the evening portraying the message of vulnerability yet strength simultaneously and it connected everyone in the room with its infections clapping back-beat.

In conclusion, Sandé’s show was one-of-a-kind. It was a very personal encounter as she bared her passions and emotions on the stage. Her faith and values came across powerfully symbolically set against the beauty of the church’s majestic windows. Sandé reminded us of her authentic superiority in this genre with her powerful yet soulful vocals.