Still tired from the chaotic but terrific Friday, Saturday at Boardmasters offered even more in terms of line-up. Our camping neighbours, locals to Newquay, told us that the relentless sunshine and clear skies were quite unlike Cornwall – so it was our duty to enjoy it to the maximum. And with the festival ground’s views down on Watergate Bay, and the surfing haven of Fistral Beach nearby, that was quite easy to do. My expectations for the day were further excited by learning that two locals to Southampton, Foxes and Craig David, were due to perform. 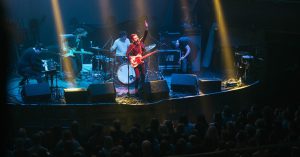 Eliza and The Bear [Image via elizaandthebear.com].

In terms of music, I opened my day with two of The Edge‘s favourite up and coming acts. Firstly, Eliza and The Bear demonstrated how well Boardmasters pick up and coming talent, as they delivered a great performance that drew a large audience despite their early afternoon slot. My only criticism was that a half-an-hour slot wasn’t long enough; I could have watched this band for at least an hour happily, though my growing sunburn might have objected. Following Eliza and The Bear came yet another new name on the scene; Jamie Lawson. Though he has been touring festivals (he played Southampton’s own Common People earlier in the summer), Boardmasters was obviously a big gig for Jamie, himself a local to nearby Penzance. Though I went into his set suspicious that he might be a bit of a one-hit wonder after his number one ‘Wasn’t Expecting That’, I found myself really enjoying the other songs he played.

Taking a break from the Main Stage, the next act I managed to catch was Southampton’s very own Foxes. Despite her youth, Foxes took to the stage with confidence and a great set. Though a name that most people are becoming familiar with (she collabed with Zedd for 2013’s hit ‘Clarity’, and also featured on Fall Out Boy’s record ‘Just One Yesterday’), she had the prowess of a well-versed performer, entertaining the gathering crowds ahead of the night’s main acts. Also, as my friend noted, she’s very good at dancing in high heels. 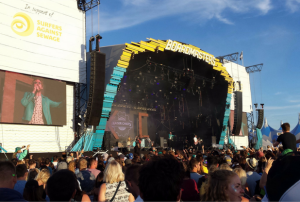 By the time Foxes finished, the crowd around the Main Stage was the busiest I’d seen it yet for Kaiser Chiefs. Likely the biggest name on Boardmasters’ entire program, they did not disappoint. The crowd went crazy as Ricky Wilson and his motley crew began performing, with spectacular renditions of ‘Everyday I Love You Less and Less’, ‘The Angry Mob’, ‘I Predict A Riot’, and, of course, ‘Ruby’. Their experience at gigging festivals was evident as Wilson put on a real show for the crowd, at points addressing the cameras filming for the big screens, and even crowd-surfing! With the band now living in Cornwall, they were an inspired choice for Saturday’s first headliner and promised to return to the festival in the future.

The night’s second headliner was Canadian progressive house performer Deadmau5. Knowing only a few of Deadmau5’s hits, I was skeptical about how I would enjoy them, but still stuck around for the show. However, I was pleasantly surprised – Deadmau5 gave Boardmasters a real spectacle of a performance, from amazing strobe lighting as the night set in, to his iconic mouse-eared helmets being passed around the thrilled audience. After his performance, I was left eager for more; and this is was the first, and really only time, that Boardmasters fell a little flat. 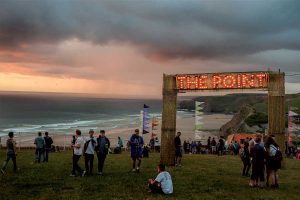 Faced with a seemingly impossible choice between Example, who was due to perform at the Land of Saints Stage, and Craig David’s TS5, I decided to stay true to my Southampton roots and go to the Unleashed Stage to see Craig. However, what I did not know was that Craig David’s flight had been cancelled, meaning he had to miss the festival – the first gig he’s missed in 15 years. I stood watching a set by the rapper KANO (which was still good, but as I found with the majority of the Unleashed Stage, it wasn’t my type of music), wondering if Craig David was just late. By the time I gave up, Example’s set was near finishing – though my friends revealed to me later that though he did eventually turn up, he was very late to his set. Though this was disappointing, Boardmasters was perfect with timing and schedules other than with these two, and hiccups in a festival this size are to be expected!

Their absence did give me a chance for a late-night exploration of the rest of the large festival ground. Smaller stages The View and The Point had stunning views over the cliffs to the ocean; while The View held intimate acoustic sessions, The Point blasted loud electronic music to a delighted crowd of clubbers. The Corona Sunsets stage was another hidden gem, with a variety of music, both live and DJ, being showcased. Boardmasters truly went all out this year.