Read more
You are at:Home»Live»Review: Carcer City at The Joiners, Southampton
By Harley James Mitford on August 14, 2016 Live, Reviews 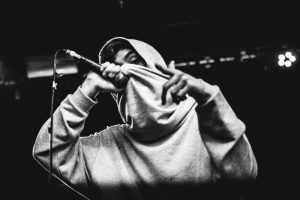 The first of the impressive four-band line-up to grace The Joiners‘ stage on the evening of the 26th July were Zephyr. Promptly kicking off the proceedings at 7:30 on the dot, they delivered an accomplished and highly effective set. A metalcore band through and through, they also incorporated elements from the nu-metal end of the spectrum; one such element was their funky riffs, which distantly recalled those of Korn. Credit to them also for maintaining 100% energy in the face of a rather stiff and sober crowd, not yet primed for the sonic onslaught that they so concisely executed.

Next up were the ingeniously named Griever. More in line rhythmically with traditional thrash metal than straight metalcore, they bring to mind the mature-era sound of Welsh group Bullet For My Valentine, who engineer a similar fusion of styles. Their drummer provided some impressive double bass pedal-work, whilst their guitarist brought the intensive screamo of the verses into relief with his delicately intoned melodies, sung beautifully in the chorus sections.

Third on were LOATHE; special guests on Carcer City’s UK tour and probably the most nu-metal leaning of all the night’s acts. The first band to get the crowd properly moshing, their frontman jumped into the fray to stir things up, and did so rather brilliantly. Incorporating spoken word into his performance, he injected a refreshing new stylistic vein into the evening’s music.

As I returned after a brief interval to my place in the crowd for the headliners’ slot, there seemed to be a notable excitement rising to the surface of the collective unconscious. Suddenly Carcer City stormed on in full fury and the place erupted. Performing songs both old and new (from their forthcoming album Infinite//Unknown), they proved consistent the mantra of vocalist Patrick Pinion, when he told me in our interview: “we’re trying to be the weirdest metal band possible.” Characterised by mercurially shifting moods; impossibly complex yet infectiously moshable rhythms; and song structures that rarely repeat even choruses let alone verses, they stayed true to his ambitious claim. 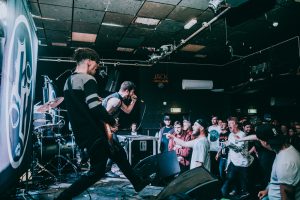 Wrapping up at around 10:15 (I couldn’t quite believe that so much had been packed into such a short space of time), the crowd slowly disbanded. As we all filtered through the merchandise stalls set up by the bar, the bands were there waiting, and began either chatting to fans; having a drink or a smoke; or generally just soaking up the relaxed post-gig haze. As I said goodbye to Patrick and thanked him for the interview, a feeling of real community sunk in. Here were a group of proper musicians, connected with their fanbase and with each other, sharing a beautiful experience.