My final night at ADE (Amsterdam Dance Event) led me to the Muziekgebouw aan ‘t IJ. Hailed as the Netherland’s most important platform for contemporary music, and classical musicians, the venue is a regular host for artists that are giving classical sounds a contemporary twist. Those in the business call it Amsterdam’s concert hall of the twenty-first century. That said, Audio Obscura’s takeover pushed the venue to its limits.

The Audio Obscura team, inspired by the link between classical composers, and electronic musicians, whom they suggest mobilise digital instruments as their own orchestra, are dedicated to giving their favorite artists the opportunity to perform in historic and iconic concert halls. Tonight came the turn of Life & Death, a record label whose output melds the darkest elements of pop and post-rock music with the party starting agenda of house music, and the astral influences of Italian cosmic disco. 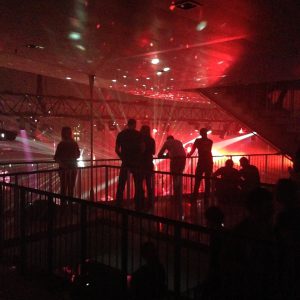 The event was a complete takeover of the imposing building. Artists were performing in every corner of the Muziekgebouw. Audio Obscura’s production team had pulled out all the stops to utilise the length and breadth of the Muziekgebouw and had rigged up sound systems in four unique spaces, the chapel, the deck, the loft, and the obscura. Upon entering, I descended the steps to a ground floor entrance, whilst overhead others filed along a gangway that led into an entrance higher up in the Muziekgebouw, as if they were boarding the hull of giant ship made of glass.

Following the blistering onslaught of techno provided the night before in the Gashouder, the more downtempo mixture of tech and house on offer by Life and Death in the main concert hall was the perfect remedy. Boasting mainstays from Life and Death’s roster of artists, including Mind Against, Recondite and Tale of Us, the main room was where I spent most of the night. Throughout the night their selection showcased the sounds championed by the label, soothing and expansive synths, building over pulsing kicks that can keep a room moving for hours on end.

Venturing up an enormous flight of stairs to the loft I encountered a small booth risen above a gathered crowd. The selection up here was as experimental as it comes, off-kilter beats, and abrasive instrumentation made the atmosphere nothing short of intense. Moving in time to the beat, huge lamp-like shades descended from the high ceiling above, blasting the floor with a hot orange glow at the sound of every industrial crash, before receding into the cavernous darkness overhead. Admittedly the tempo was a little too varied to get locked into the groove, and though intrigued by the bizarre soundscapes that were being woven, I didn’t find myself stopping by for more than fifteen minutes or so at intervals throughout the night. 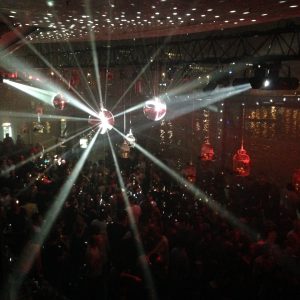 The liveliest crowd could be found just below the obscura on the deck. Exiting the main concert hall you would find yourself on a balcony looking out over the IJ, the waterfront that separates central Amsterdam from its northern quarter, Amsterdam Noord. Immediately below, however, the rising torrent of party-goers dancing on the deck offered a stark contrast to the tranquil black waters of the IJ, which could be seen on the other side of the Muziekgebouw’s glass shell. To add to the effect, disco balls, suspended on level with the balcony, cast their silvery beams over the crowd in a way that mimicked the twinkling of the city lights on the water outside. As the night wore on I found myself among others, perhaps a little weary from night after night of dancing, resting against the balcony and enjoying the selection from above as the party continued below.

Stepping out into the cold night air later on, I strolled around the Muziekgebouw and along a pontoon to view it from the water. Through its towering glass façade the party up on the deck was still in full swing as blast after blast of white light lit up the face of the venue. Audio Obscura presents: Life & Death had been the perfect event to cap off an incredible week at Amsterdam Dance Event.