I could tell you that when I saw Carl Cox play at Amsterdam Dance Event that he played X, then Y, then Z, and it was incredible, however, in doing so I would not only be pretending to know far more techno records than I actually do, but I would also fail to convey what it actually felt like to be a part of, arguably the festival’s biggest event. So, instead, I will do my best to describe the experience of what it was like that night in the Gashouder.

Located to the north-west of the city, in Amsterdam’s Westergasfabriek gasworks complex, the Gashouder was the largest building of its type in Europe when it was constructed back in 1902. The Gashouder is an enormous industrial cylinder, a pillar-less steel tank that was used to, you guessed it, hold gas. In recent years however, Awakenings, one of the Netherland’s most prolific promoters, have helped to re-purpose the structure for an entirely new use.

The sheer size of the Gashouder makes it the ideal venue for a gargantuan party, and when packed to the brim it can contain 3,500 people. As I entered the cavernous space just after midnight, a nearby dancer excitedly told me how the event had been the first event of Amsterdam Dance Event to sell out, doing so months in advance. The excitement was palpable, regardless of whether fans had traveled to see Carl Cox for the first time, or had experienced his reputable skills on countless occasions before, everyone was excited to share their stories, each one feeding into a shared mythology of why tonight was going to be phenomenal. 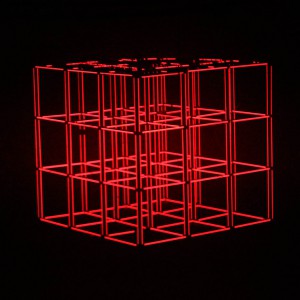 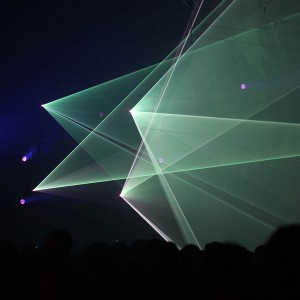 The Martinez Brothers’ selection was far more welcoming than the aggressive pummeling beats often associated with techno, and made for a lighthearted and refreshing opening. Pale green specs of lights trickled down the walls like marching ants, as they traced the path of the giant iron beams that supported the Gashouder’s apex. The entire space was mesmerizing as it gradually transformed over the course of the night. Huge cubes made up of strip lights hung from the ceiling, suspended by chains, they silently ascended and descended, pulsing with colour in time to the beat. At one point during the Martinez Brothers’ set, an enormous disco ball at the room’s center crept down from the high reaches of the rafters and sank low, just above the crowd. A beam of green light hit its surface scattering hundreds of rays in every direction.

Beneath the shallow dome the temperature steadily built. The air was thick with the stale tang of second hand smoke. The crowd moved continuously, a sea of bodies, the music guiding their movements. The crowd would rise to a frenzied state at each crescendo, at which their release of energy would be punctuated by the CO2 canons expelling thick clouds of gas over the crowd. Blasted by the cool air, we were engulfed. Buffeted on all sides you entered a tunnel of air, the cavernous surround collapsed around you allowing only a partial view of the shadowy silhouettes of those in your immediate proximity.

Nicole Moudaber’s arrival was heralded by haunting warbles as she sank the room down into a darker, murkier vibe. The ideal warm up for Carl Cox, Moudaber eased the crowd into a more intense selection of records, all the while providing a driving beat, enough to carry everyone through to the early hours.

As 5am approached, the excitement of the crowd reached new heights, anticipation for the arrival of Carl Cox was building to a feverpitch. In the closing moments of Moudaber’s set, just the man’s presence in the booth was enough to send fans wild as he prepared to take charge of the decks.

His name emblazoned over the giant screens behind him, Cox wasted no time in getting straight down to business. The guy had everyone locked into his groove. He was received with passion by one of the most pliant crowds I’ve ever been in, everyone was giving it their all, feet stomping, whistling and cheering. Cox had ignited the crowd. Now feeding off one another’s energy, it showed no sign of escaping under the Gashouder’s dome.

As if the music, visuals and sheer excitement of the crow was not enough of an onslaught on the senses, what came next took me completely by surprise. . .

As Cox’s set continued, fireworks began to erupt from the walls. Confused at first by the screeches and wails overhead, I turned my head upwards as burning red spheres shot over our heads criss-crossing and streaming tails of smoke behind them. Each would burst into a shower of colored sparks as it hit the opposing wall of the Gashouder. Never before have I witnessed such an insane pyrotechnic display.

Despite the bombastic spectacle, Carl Cox undoubtedly lived up to the hype. Sweating away behind the decks, Cox was giving it his all. His mixing was peerless. Smooth, flowing transitions between each record were delivered with one objective in mind: keep it moving.

Eventually I had to drag myself away to snatch a few hours sleep in preparation for the next day of ADE. Emerging into the crisp autumn morning, the sun climbed over the Westerpark. The calm of the morning was a complete contrast to the numbing onslaught of the past few hours. Carl Cox & friends was undeniably an unforgettable experience, in no small part due to the truly unparalleled experience of Amsterdam’s Gashouder.