Reading Festival is a long weekend.

It can be up to six days long for some people, but most people tend to spend a good 3-4 days at Little John’s Farm. 3-4 days of gritting through dismal rain, rank toilets and questionable life choices. The music is a cherry on top of the festival lifestyle. Reading 2013 was a strange year; the line up began to change and go “mainstream”, the arena and campsite layout changed and the target audience began to change too. After an eclectic and stacked line-up had played out over the weekend, everyone was drained and could hardly keep going – Green Day had played an overly long and poorly structured headlining set on the Friday; there were nightmare crowd problems brought about by Chase & Status’ Saturday night set; Eminem returned to a very mixed response and reception; Fall Out Boy played a perfectly adequate Sunday set; and then there was whatever happened with Nine Inch Nails and whoever pissed Trent Reznor off. 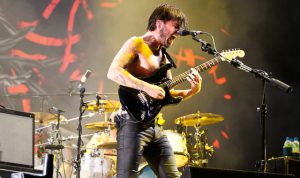 Biffy Clyro, closing out the weekend’s proceedings, played their first headlining set at the festival and had a lot riding against them. With a frustrated and tired crowd – some of whom questioned their headline credentials – and a headline slot that was being played to a musically watered down crowd compared to their previous years, the Scottish trio surely had to be nervous. But they didn’t show it, in fact, they absolutely smashed it.

Playing an epic 21 song setlist which seamlessly blended their new songs with the old, Biffy proved all the doubters wrong and solidified themselves as Britain’s finest rock band in the process. So much so that they’re returning to headline once again this year. After casually strolling on stage to the end notes of ‘We Are Family’ by Sister Sledge, lead guitarist and singer Simon Neil smiled to the crowd, amidst waves of cheers, and simply said: “We are family, I’ve got all my sisters with me.” The band then proceeded to launch into a blistering performance of ‘Different People’, from their album Opposites, with the crowd bellowing every word right back at them. A four song opening streak of ‘Different People’, ‘That Golden Rule’, ‘Who’s Got a Match?’ and ‘Sounds Like Balloons’ kicked the crowd into overdrive, setting the tone perfectly for what was to come, all whilst proving that Biffy’s newer material was just as popular as what had come before. 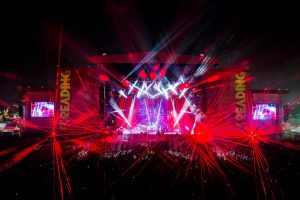 The band continued to plow through the hits, including ‘Biblical’, ‘Bubbles’, ‘Folding Stars’ and ‘Machines’, showing off their impressive Foo Fighters-esque back catalogue of grunge-inspired rock n’ roll. Seriously, the crowd knew every word and responded to every song, you’d think that this was their fifth headlining set, not their first. The rare appearance of one of their earliest and most beloved tracks, ’57’, was a pleasant surprise – marking the only material from Blackened Sky (one of the most criminally underrated and overlooked rock albums of the decade).

Even if the newer and younger fans may not have been as familiar with it as they were with the following track, chart hit ‘Many of Horror’, it was a nice moment for the band to pay tribute to their past at the festival. But, as mentioned, the crowd loved every minute of ‘Many of Horror’ – it elicited probably the biggest sing along of their set and marked the start of an epic six song finale. After a rousing performance of  ‘The Captain’, complete with a burning guitar, the band exited the stage before returning for an encore of ‘Skylight’ (which featured a somewhat muted reaction), ‘Stingin’ Belle’ and closing track, ‘Mountains’ – which both saw the crowd return to full force and closed the weekend in serious style.

With one of the best sets and shows of the weekend, Biffy Clyro’s headlining set was a complete triumph for the band and a real statement of intent. This was just the start, they’re coming back and they’ll be back many more times. Based on this show, I can guarantee it.