Read more
You are at:Home»Live»Festivals»Review: Isle Of Wight Festival 2016 – Sunday
By Will Hodgetts on June 23, 2016 Festivals, Live, Reviews

So the Sunday brought about the final day of this year’s Isle Of Wight Festival at Seaclose Park in Newport. Needless to say, after a particularly weak day on Saturday, festival goers were in need of a decent Sunday in order to look back on it with fond memories. And I shall just state it now, Sunday more than made up for Saturday, and was quite easily the best day by a country mile.

My day started bright and early (in festival terms) at midday in order to catch Southampton-based band The Novatones open up the Big Top. The four-piece, plus The Lost Boys’ Joel Doherty on keys, had managed to create quite a bit of hype around their set by plastering stickers all over the site (and people!) advertising their set-time and venue. This no doubt intrigued numerous people as there was a fair sized crowd waiting for the lads to take to the stage.

Wearing buttoned up shirts and sporting black sunglasses, frontman Anthony Pittman, guitarist Mackenzie Gordon-Smith, bassist Toby Hornby-Patterson and drummer Sean Swift showed those in attendance why this group more than deserve their current rise towards the mainstream, and a place on The Edge’s ‘Acts to look forward to at Isle Of Wight Festival 2016‘. Their hard-hitting anthems certainly did not seem out of place in a festival setting and showcased the groups ability to perform to crowds much larger than what they perhaps would normally perform to. It was great to see the whole crowd getting into the set, bopping and singing along, but what perhaps proved how great this young band truly are was the fact that the crowd just got bigger and bigger throughout the set, with passers by deciding to stop and listen instead of carrying on their early-afternoon stroll. The most magical moment of the set came with The Novatones’ final song, ‘Avenue Road‘. Pittman left the breakdown to the crowd, who were more than willing to sing the lyrics “we are the lost boys of The Avenue” over and over again. The chant got louder and louder as more people joined in, leading to the band seeming quite emotional at this response.

Having grown up in Southampton and the surrounding area my whole life, this struck a chord with me on a personal level, having walked or travelled down that Avenue Road so many times over the years. I was left with goosebumps, something that has never happened to me at a gig before. I urge you to check these boys out, you won’t be disappointed.

I then joined back up with my festival buddy who had to miss the Saturday due to a prior commitment, and headed towards the Main Stage for a spot to eat and to catch Scottish rockers Twin Atlantic. I had heard numerous great things about Twin Atlantic and their abilities in a live setting, particularly at festivals, but I was unfortunately left disappointed by what they had to offer. I think perhaps they aren’t the type of group that should be on the Main Stage at IOW, as they offer something a bit heavier to the usual act that perform there. They would have been suited better the Big Top, a smaller venue that showcased other heavier bands and artists over the course of the weekend. This was reflected by the poor turnout for their set.

It was therefore decided that we’d ditch the Main Stage and head back to the Big Top in order to kill time until Queen + Adam Lambert later that evening.

We were incredibly confused once we walked in and sat down to watch Gutterdämmerung. Expecting a live band, we were instead welcomed by a big screen and a film. But the film’s soundtracks, which were popular hard-rock anthems, were played live. Only upon investigation thanks to the world wide web, we discovered that Gutterdämmerung wasn’t a band, but instead is a “part rock show part immersive cinema experience featuring some of the biggest rock names on the planet including Grace Jones, Iggy Pop, Henry Rollins, Eagles Of Death Metal’s Jesse Hughes, Motörhead’s Lemmy, Tom Araya, Mark Lanegan, Volbeat, Queens of the Stone Age’s Joshua Homme, Justice, Nina Hagen and Slash”. This revelation relieved us of our confusion and meant we could sit back and try to figure out what the hell was going on… Unfortunately I think we figured it out too late in order to then try and follow the plot, but the music was enjoyable nonetheless! The main part of the piece was played by Henry Rollins, who graced the stage following the conclusion of the film in order to offer a dedication to the late, great Lemmy and welcomed the band back on stage in order to perform a tribute in the form of Motörhead’s ‘Ace of Spades’.

Next up were Sixx:AM. When the four-piece mounted the stage, they couldn’t have looked more mismatched if they’d tried. The frontman appeared, from a distance, to look like Rod Stewart, the lead guitarist looked like he belonged in a Japanese thrash metal band, and the bassist, as I said to my friend, looked like something out of Motley Crue. As it turns out, I was absolutely right on my latter comparison – the bassist, and founding member, Nikki Sixx, is Motley Crue’s bassist. The lead guitarist meanwhile turned out to be DJ Ashba, Guns N’ Roses’ lead guitarist from 2009-2015, and the frontman is legendary producer and songwriter James Michael. This all made so much sense once we found out, because they were absolutely incredible. Michael’s vocals were sensational, and individually the instrumentalists were truly incredible. Ashba in particular was mesmerising, seemingly having to exert very little effort in order to play extremely complex riffs and hooks. Sixx:AM epitomise 80s rock and everything that is so great about it, belting out anthem after anthem at an very high level. I had never heard any of the tracks before, but I thoroughly enjoyed every single one. If pushed to pick highlights of the set however, I’d have to say ‘Rise’ and their final track ‘Life is Beautiful’, which got everyone singing along by the end of it.

West Country quartet Reef then had the unenviable task of following a set that blew so many minds. Sadly they were not at the same level as Sixx:AM. Their set didn’t have the intensity of the band before them, instead coming across a bit more laid back and chilled. Had they not followed on from such a energetic set, it would have perhaps been a lot more enjoyable instead of it being an almost anti-climax. Despite this though, ‘Place Your Hands’ got everyone jumping and singing at the top of their lungs. This seemed like an apt time to leave and head towards the Main Stage and set up camp in time for the headliners.

Queen need no introduction. Arguably the most successful British rock band of all time and certainly my favourite group ever. It had always been a dream to see Brian May and Roger Taylor perform live and Sunday made that a reality, with the extremely charismatic Adam Lambert stepping into the very VERY big shoes left behind by the legendary Freddie Mercury. 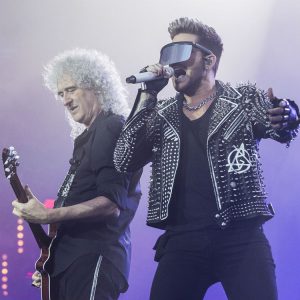 The group treated those at Seaclose Park to a strong 21-track set filled with all time greats and favourites before a two song encore. Lambert exploded onto the stage donning a spiked leather jacket and metallic glasses before busting into ‘One Vision’. When I’d seen videos of Lambert performing with Queen before, he had always seemed to perform reasonably tamely or reserved, but not on the Isle Of Wight, oh no! He was in full entertainer mode, full Freddie mode. However tempting it would be to copy some of Mercury’s trademark moves and antics, Lambert doesn’t, instead opting to do his own thing, which no doubt helped to endear himself to all those turned out to watch. The most notable thing about the 34-year old American though is his absolutely incredible vocal range. I have never heard a male singer manage to reach the notes he did, not even Sam Smith.

Queen played numerous crowd favourites, including ‘Seven Seas of Rye’, ‘Another One Bites the Dust’, ‘Fat Bottom Girls’, ‘Killer Queen’, ‘Don’t Stop Me Know’ and ‘Somebody to Love’ amongst numerous outfit changes by Lambert, before Brian May brought out an acoustic guitar and took to the mic himself in order to perform ‘Love of My Life’. Thankfully May was never the frontman as his vocals aren’t all that impressive, but it was a nice breakdown from the intensity of the set. It was then the turn of drummer Roger Taylor to take the mic in order to lead the vocals on ‘A Kind of Magic’. In what was perhaps the shock of the night, Taylor showed how good a vocalist he is, surprising the thousands in attendance by hitting every note without fail. He then returned to his more familiar drum kit to partake in a drum battle with the band’s touring supporting drummer, which was good fun. The 66-year old then said a few words about the late David Bowie before Lambert and May returned to play their collaboration, ‘Under Pressure’.

They proceeded to power through ‘Crazy Little Thing Called Love’, ‘I Want To Break Free’ and ‘I Want It All’ before Lambert provided a heartfelt message regarding the Orlando shooting which had happened the night before. He then offered ‘Who Wants to Live Forever’ as a tribute to the victims and the LGBT community as a whole. The set soon came to a close following ‘Bohemian Rhapsody’ and ‘Radio Gaga’, before a brief interval before the encore. They returned to play their go-to encore combination of ‘We Will Rock You’ and ‘We Are The Champions’, which was a fitting end to a great weekend of music.

Queen + Adam Lambert were everything I was hoping they’d be and more. The music, the light show, everything was sensational. There will never be another Freddie, he was and always will be one of a kind, but Adam Lambert is the closest we shall ever get. His vocal capabilities are unrivalled in the music industry and he has the performer’s instincts to match in equal measures. The band don’t seem to be slowing down anytime soon, and that makes me so happy.