Read more
You are at:Home»Live»Review: The Hunna at the Joiners, Southampton
By Olivia Krauze on June 15, 2016 Live, Reviews

The Hunna, a fresh up-and-coming indie band from Hertfordshire returned to play at The Joiners, Southampton, last Saturday, as part of their current UK tour. It is safe to say that they blew up the place (like a bonfire).

The Hunna were supported by Airways, a band also new to the indie scene. Technical glitches and nerves did not stop the Peterborough boys from warming up the audience with a cool mix of covers and original writing. Airways ended their set by promoting their debut single ‘Ghost Town’, featuring some promising instrumental writing.

After a short break of building anticipation, The Hunna’s Ryan, Dan, Jermaine and Jack took the stage, greeted with a huge bout of cheers (and the occasional wolf-whistle). They instantly grasped the audience’s attention by launching into one of their well-known tracks: ‘You and Me’. The fast-paced and lively beat was an immediate hit with the crowd.

Despite the venue getting extremely heated, the energy levels of both the band and their audience remained high. Through the sweat and the doubtless pain of the tattoos some of the members had got done earlier that day, the band remained tireless. Moreover, one audience member commented that she had never seen the venue so full of people and energy. 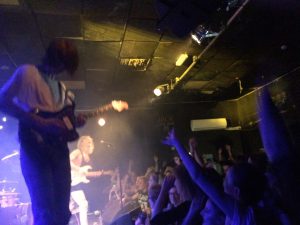 The Hunna also teased their audience with some new singles, hot from their debut album, due to be released in August. Not knowing the words to ‘Never Enough’, ‘Alive’ or ‘Bad For You’ did not stop the crowd from rocking out to the music just as energetically as they had to previous familiar tracks.

They also made time for a massive crowd selfie, with lead singer Ryan sincerely stressing the importance of his fans, ‘The Hunna Family’, to the band. Their willingness to meet their supporters after the set also showed that the lads have not taken their recent musical ventures for granted.

The highlight of the night was unsurprisingly the band’s performance of their first ever single, ‘Bonfire’, which initially made them their name. With edgy vocals, paired with a distinctive and catchy accompaniment, the track remains one of their best. The audience reaction, with some people even attempting to start a mosh pit (yes, in a small Southampton venue, who knew), can certainly vouch for it.

With the band shortly heading to the States to continue their tour, The Hunna appear to be going from one success to another, with an ever-growing, loyal fan base in tow.