Read more
You are at:Home»Live»Review: Escape the Fate at Engine Rooms, Southampton
By Kolby Pearson on June 14, 2016 Live, Reviews

After the drop of their fifth studio album, Hate Me (released October 2015), Escape the Fate have a huge UK/EU/USA tour spanning a number of months. Fronted by ex Blessthefall vocalist Craig Mabbitt, Escape the Fate have been making themselves known in the metal world since their formation in 2004. Hate Me is the fourth album to feature Mabbitt. Over the past eight years, since the departure of former vocalist Ronnie Radke, Escape the Fate’s sound has taken an experimental journey of rediscovery. From the pure metalcore of This War is Ours (2008), to the post-hardcore vibes of their self-titled album Escape the Fate (2010), they seemed to have found a happy medium in Hate Me. The album sound takes a hard-rock approach with strong influences from their previous albums. 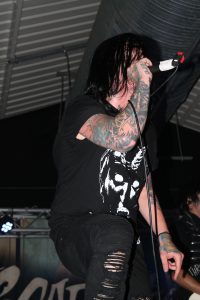 Mabbitt getting into it (Photo by Kay Pearson)

Despite losing members along the way, with the only original member being drummer Robert Ortiz, Escape the Fate have managed to accumulate their current line up’s skill set to create one of their better records yet. The support bands, These Days Are Numbered and Fearless Vampire Killers, put on fantastic performances and got the crowd pumped and ready for the main set. Escape the Fate opened their set with one of the most popular from the album ‘Just a Memory’, immediately throwing all their energy into the performance.  The sound techs need some huge praise for this set; the squashed and fast paced sound typical of most metalcore records had been revamped. Each layer of the music was clear and able to heard, making it a pretty great start to the show.

Kevin Thrasher, on lead guitar, did not disappoint on the insanely fast guitar work, whilst simultaneously putting so much energy into the performance that he often left the floor, throwing himself around on stage. This talent was even more apparent when playing a few of their older, more well-known tracks like ’10 Miles Wide’. From a fan’s point of view, being able to see these guys play their classics to such perfection despite having a whole new line up is both a nostalgia trip, and immensely satisfying to watch. This added to the upbeat feeling that was present throughout the show, such is the feeling to the album. Whilst the usual angst is quite apparent in the record, tracks such as ‘Live For Today’ are more upbeat and care-free in feeling, making the whole atmosphere of the gig incredibly nice to be in. Along ’10 Miles Wide’, they also played a few other older tracks, catering to the diverse age-range present at the gig. 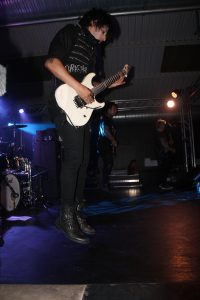 Kevin Thrasher jumping around on stage. (Photo by Kay Pearson)

As I’ve already mentioned, Escape the Fate have gone through quite a few band members in the past few years, and are currently touring with a temporary bassist, Max Georgiev. Because of the pretty clear sound of the performance, it’s essential that all the musicians play to top quality; and Max really does show this. He puts so much into the performance, and has very clearly got the right level of talent to be touring in with Escape the Fate.

Once they’d completed the set list, Craig gave his thanks, peaced-out to the crowd, and they all disappeared. Almost immediately the room was a chorus of “One more song!” going on for several minutes. The lights dimmed, and the band returned to stage to play their encore of, arguably, their most famous song ‘This War Is Ours’. Overall the show was incredibly satisfying, both in the sense that the performance was energetic and fun to watch, but that their sound was of higher quality than the over-production of a studio album.

Escape the Fate are no longer touring the UK, but their US and EU tour dates are available here.