Slam Dunk returned this year for its usual three legged haul, showcasing the biggest and the best bands and artists pop-punk has to offer. 2016 marked the festival’s tenth anniversary, and, unsurprisingly, it pulled off the spectacular celebration of the genre we were all hoping for. Thousands of fans piled into the University of Hertfordshire for the sold-out festival to see the likes of Moose Blood, Of Mice and Men, Young Guns, New Found Glory and Panic! At The Disco, and with no less than eight stages, Slam Dunk 2016 left no stone unturned and no fan unsatisfied. 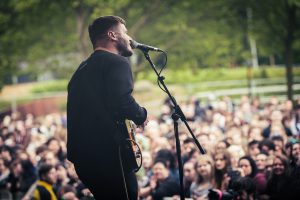 Moose Blood warm up the crowd. Image via Kennerdeigh Scott

As Jack & Lewis kicked off the final leg of the weekend on the Uprawr Stage, Moose Blood drew in a surprisingly large crowd to the Main Stage, though quite obviously only due to the bands following them. Seemingly quite inexperienced with large festival crowds, the band did relatively well to navigate their audience and mustered up enough stage presence to get the crowd cheering, even though the majority had no clue who they were – save for the second row who rushed off as soon as Moose Blood’s set had finished; but the barrier was full of the hardcore Panic! fans who had no clue who any of the other bands were and spent much of the time scrolling through social media on their phones. Nevertheless, Moose Blood earnt their place on the Main Stage, proving just how much speed they are picking up in the pop-punk scene.

The Desparados Stage was definitely the place to go if what you came to do was dance. The JB Conspiracy opened the stage with a short but worthy set, followed by [Spunge] who played a multitude of their classics to their reasonably small group of devoted fans.

Back to the Main Stage where Young Guns kick off to a lively, swooping cheer from the crowd. Opening with 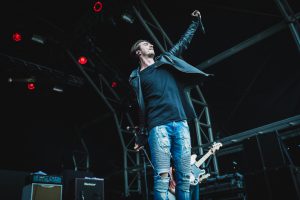 ‘Daughter of the Sea’ which met with a less than enthusiastic response, the band soon turned the set around and dived into their classics, playing ‘Winter Kiss’ and ‘Brother in Arms’ before launching into their penultimate song ‘Bones’, which was undoubtedly what a great deal of Main Stage-ers came to lose themselves to. And they weren’t disappointed – ‘Bones’ is by far their best song, both on track and played live and they never, not once that I’ve seen, neglect it of the power and urgency it needs. Closing with the slightly lesser, but nevertheless welcomed ‘I Want Out’, Young Guns ran off stage to the sound of a roaring, satisfied crowd.

As the Main Stage was prepped for Mayday Parade, Miss May I finished up their five-song set on the Atlas Stage with the metalcore-esque ‘Hey Mister’, lead singer Levi Benton’s deep vocals masking the lyrics but still proving their worth at what has proved up to this point to be a pretty decent tenth anniversary of the festival.

Taking a quick break from the festival’s action, I returned to the end of Yellowcard’s Ocean Avenue set to catch their final song ‘Believe’. As the crowd chanted the lyric they’d all grown up with –  “everything is gonna be alright, be strong, believe” – they reeked of nostalgic energy that was lovely, really, to witness. Up next was Mallory Knox who drew in a surprisingly large, devoted crowd. Even those on the horde’s edge were bopping along to many of their hits, and I was pleasantly surprised to find the band were incredibly energising to watch and were undoubtedly the most grateful band of the evening, expressing their thanks for the audience between nearly every song. Honestly, it’s so refreshing to see genuine gratitude from any mid-major to major bands today. Taking their audience for granted is such an unattractive quality for any artist, which, luckily, Slam Dunk seem to have culled for their tenth anniversary. 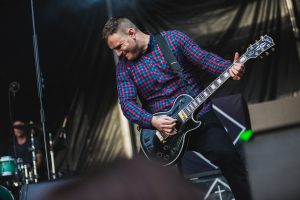 While Memphis May Fire lit up the Atlas stage with several of their own hits, New Found Glory soon burst onto stage to be met with an eruption of cheers, whilst their equipment was still being set up no less. But no worry for these pop-punk veterans, having been around for nineteen years they were without a doubt the band who had the most passion exuded from the ever-growing crowd. With mosh-pits opening up almost immediately, the crowd was divided between the rowdy NFG fans (including yours truly) and the fans who had waited nine hours solely for Panic! At The Disco whose tired eyes could only glare at their unnaturally energetic crowd-mates. And with an overload of their biggest, best and a few lesser known hits, their performance this year was undoubtedly a treat for the oldest and most loyal fans. Though inarguably the highlight of the set, if not the whole day, was when they brought one of their most loyal fans up on stage (his name was Phil – “his mother calls him Phillip”, joked frontman Jordan Pundik) to choose a song he’d never heard played live before being invited to sing it along with the band, meeting the chants of “Phil! Phil! Phil!” from the crowd, ecstatic for Phil’s luck and surprisingly good voice.

As the time neared ever closer to the time everyone anywhere near the front of the crowd had been waiting for, Of Mice and Men were also preparing to enter the Atlas stage. And with a relatively long set, they didn’t disappoint their devoted crowd – playing songs getting the whole crowd up and chanting like ‘Bones Exposed’, ‘Feels Like Forever’ and closing with the crowd favourite ‘You’re Not Alone’.

But it really was Panic! At The Disco who stole the show. As claims that ‘the water had run out’ began to emerge from the barrier, 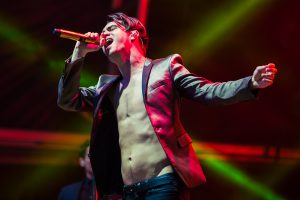 Panic! At The Disco frontman Brendon Urie emanating all the colours of the wind. Image via Kennerdeigh Scott.

literal panic began to set in for the dehydrated fans in the second, third and fourth rows who had spent all their energy on New Found Glory’s set. No worry though, for all was forgotten as soon as Panic!’s touring members swaggered on stage in their sharp suits and gelled hair, soon followed by the man himself: a very, very topless Brendon Urie, Panic!’s only original member. The crowd erupted into a deafening roar as he waved out to his adoring fans and the bass riff for ‘Don’t Threaten Me With A Good Time’ began the set. And with a multitude of backflips, fire cannons, and a stunning amount of falsetto, their set was everything everyone there wanted, and of course, being Panic! At The Disco, even more. At around the halfway mark, a piano was brought on stage for crowd-favourite ‘Nine in the Afternoon’ before launching into a remarkable cover of Queen’s ‘Bohemian Rhapsody’ which had many emotional fans in tears. And with the majority of the set taken from their most recent album Death of a Bachelor, their best album by far, the set was all rise from the very beginning.

Closing with a bang with the feisty, if not slightly unnerving, ‘Emperor’s New Clothes’, Panic! At The Disco culminated Slam Dunk the only way they could be expected to: with absolute and undoubtable style. And they had some pretty tough acts to follow, which only really goes to show the quality of each act performing this year. 2016’s Slam Dunk has really proved itself to be one of the best years yet, marking an astonishing tenth anniversary. All together an utterly enthralling and exuberant day of the biggest and best performances of pop-punk, Slam Dunk 2016 really outdid itself, even if it was a little slow to pick up. Slam Dunk 2017 – you’ve got a lot to live up to.