There aren’t many icons in the realm of film scoring. There are definitely loads for those with a specialist interest, but to the general public there’s only a handful. Of that handful, Hans Zimmer is absolutely one of the most diverse and influential. In the last couple of decades, nobody has had more of a pronounced presence on the film industry in terms of music. Constantly establishing new trends, and scoring for some of the biggest blockbusters and directors around, Zimmer has been able to solidify his status as a modern day idol. His work has become instantly recognisable and is constantly being imitated. His horde of protégés (ranging from Game of Thrones’ Ramin Djawadi, to X:Men First Class’ Henry Jackman) dominate blockbuster franchises and he has even managed to change the way that trailers are scored thanks to his now infamous Inception horns.

The point is, if any modern composer is going to attract an audience sufficient enough for an expansive tour, it’s Zimmer. Having worked on over 150 scores of varying styles, he’s bound to have come up with something that you know and love, so it’s really a wonder that it has taken him this long. Part of this is down to the musician’s well-documented stage fright, but also to his very busy schedule. However, he has now finally decided to embark on the journey, touring across Europe with his orchestra, Johnny Marr and Lebo M, the legendary voice of The Lion King. The resultant show is an astonishing experience that brings the soul and majesty of Zimmer’s distinguished work to the stage, encompassing the epic scope of films like The Dark Knight, and also the intimate nature of smaller pieces like True Romance or Rain Man.

It’s a lengthy show, comprised of thirteen pieces (excluding the encore), mostly suites of key films in Zimmer’s career, although some are also made up of a few films merged together. Picking a favourite is thus a difficult task, partly because they’re all so memorable, but also because they each offer something entirely different. Indeed, variety seems to be the key goal here, as we journey through Zimmer’s diverse discography, going from the bombast of The Man of Steel, to the jaunty rhythms of Sherlock Holmes, to the more contemplative mood of The Da Vinci Code and Angels and Demons.

What’s particularly impressive about this is that every single piece is just as effective, albeit in very different ways. The Thin Red Line is a truly incredible piece of sombre reflection, whilst the electrifying performance of Pirates of the Caribbean perfectly encapsulated the sense of swashbuckling adventure. For me personally, the two highlights came in the form of Gladiator and The Lion King. The latter felt especially authentic given the inclusion of Lebo M, whose iconic voice opens the very film itself. Effortlessly working through the major themes and motifs of the soundtrack, Zimmer and his orchestra managed to condense the emotional impact of the animated classic into just a few minutes, in what was one of the most stirring aesthetic experiences I have ever had. Equally, Gladiator’s haunting vocal-lead music translated to the stage wonderfully, proving itself to be a profound piece of art in of itself, even when detached from the film it is intended to accompany.

What was really masterful here was how Zimmer so seamlessly transitioned into the more intense stuff, without it feeling dissonant or jarring. Indeed, with pieces like ‘Gotham’s Reckoning’ from The Dark Knight Rises, I was soon sat on the edge of my seat with a massive grin on my face. On that subject, The Dark Knight trilogy offered the most rousing and sensational tracks of the evening. As the audience was plunged into near total darkness, they were left mostly with the periodic blasts of horns and the intense articulation of strings to truly immerse them into a darkly dramatic atmosphere. It was an epic performance, as the orchestra then proceeded to move through the key pieces of the trilogy, including the famous Joker’s theme and the aforementioned ‘Gotham’s Reckoning’. With the pulsating brass and imposing chanting of the latter filling the venue, it was a truly spectacular piece to experience live, a thrill which was accentuated even further by the intricate visual effects and the hair-raising strobe. 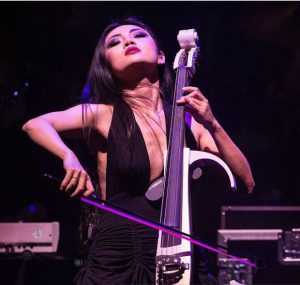 As someone who is intensely interested in the film scoring process, but has little actual knowledge on the subject, the performance also appealed to my sense of curiosity. The visual components of the evening consisted largely of dynamic lighting effects that highlighted exactly who was playing and at what time. This had the effect of letting you know what instrument produced what sounds, something which is obviously denied to you when watching a film. Obviously this also served to translate the music into visual terms, which it did very well, but for me the really interesting part was being able to see how certain unusual timbres were actually produced by the orchestra. Everything from changes in dynamics, to the involvement of certain instruments, was signalled clearly by the lighting, breaking down the scores in a coherent way. Additionally, Zimmer would often introduce pieces by instructing the audience to watch certain sections or individual musicians, directing our attention to where the magic was actually happening. For example, knowing to look out for the stunning work of the cellist during Pirates of the Caribbean really helped me appreciate the music on another level, and turned the whole thing into a fascinating, almost educational experience. Zimmer even touched briefly on the background of certain pieces, detailing for instance how he faced studio interference when trying to write an unconventional choir-lead action score for Crimson Tide.

All of this was of course aided by the fact that Zimmer himself is a thoroughly charismatic man, whose percent for self-deprecation and endearing anecdotes immediately facilitated an aura of companionship and an easygoing vibe that lasted throughout the night. He constantly stresses just how much his orchestra feels like a family to him, and it felt genuinely sincere, you could feel the warmth and affection in every speech and every interaction. Whilst this could have easily felt sappy or forced, it was so natural and unaffected that it was hard to feel cynical about it. Zimmer’s subsequent speeches about the potential for music to bring people together were equally passionate and earnest, rather than hackneyed and trite.

In fact, it’s rare that I actually feel that sense of community and connection when people talk about music, even if I do understand it. Yet, as Zimmer regaled us with anecdotes of people bonding over his work and how the process of making music can change people’s lives, I have to admit he started to pierce my icy, sceptical heart. At one point I almost thought I understood feelings, although it may have just been stomach pains. Is this what other people experience on a daily basis? If so, I didn’t like it. I felt weak.

The only real criticisms I have of the show are incredibly minor. Zimmer clearly strived to experiment with most of the material, opting for more rock-oriented sound, which is laudable, as it makes the overall experience feel more unique. However, in doing so, he does compromise the emotional heft of some of his more intimate pieces, namely ‘Stay’ from Interstellar. Here, the inclusion of guitar into what was originally a very sparsely textured piece does undercut the ethereal quality of the track. In fact, Zimmer seems to have had to force that instrument into many of his pieces, presumably so that the guitarist has something to do. Luckily, for the most part this inclusion isn’t too intrusive, I just would have preferred it if it didn’t occasionally overpower some of the other instruments. Of course, you can’t be too critical of an artist wanting to do something different, after all, if I wanted an exact replica of the original recordings, I could always listen to the soundtrack albums.

In short, Hans Zimmer Live on Tour is a thoroughly enjoyable experience, that combines disparate musical styles and genres into a cohesive whole. You can tell that this was a carefully considered effort, and not just a cheap cash-grab. This dedication shows in every area, from the truly impressive staging, to the stunning visuals, to the thoughtful changes made to the music. Of course, the most important thing is the actual performance itself, and here Zimmer and his orchestra excel beautifully. For my money, it was the most consistently satisfying production I have ever seen, hitting nearly every intended emotional point and never failing to entertain. I might be a fan, but that doesn’t change the fact that this was a stunning show, that I could recommend to anyone who is a culture fan.