Read more
You are at:Home»Live»Review: Saturday and Sunday at Bestival 2015
By Amy Wootten on September 18, 2015 Live, Reviews 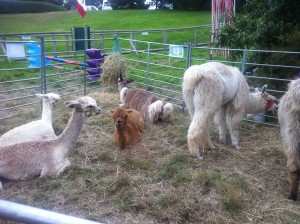 Llamas and alpacas in The Ambient Forest

Saturday, the nominated fancy dress day, was the perfect day for exploration of the site. Everyone was decked out in their Summer of Love hippie inspired outfits, sparkling with glitter and enjoying the sunshine. An escape was found in the Ambient Forest, which removed us from the music and played host to hidden cafes, massages, a maze, and some llamas.

Clean Cut Kid took to The Big Top on Saturday afternoon, with their new single ‘Runaway’. The four-piece brought punchy rhythms, nasally vocals and diverse subject matter (from break ups to ADHD), woven into happy afternoon tracks that suited the sunny afternoon. At ease on the stage, the bassist gathered the crowd together to take a picture for his mum, before they ended with the song most were waiting for: ‘Vitamin C’. It was received with applause and dancing, and the band seemed to be the uplifting vitamins that everyone needed after a heavy weekend.

The Main Stage glittered with Mercury Prize nominees Kate Tempest and Jungle as the evening progressed- whilst other nominees and winners, Young Fathers, could be found elsewhere on the schedule. The casually dressed Kate Tempest told the crowd that Bestival was “a massive deal” for her, and the performance was raw and captivating with lyrics that explored postmodern themes of drug abuse, consumerism, and personal issues. ‘Circles’ was a personal highlight, with its quick lyrics and more musical body than some of her other tracks. Tempest was closely followed by modern soul collective Jungle, who came to the stage with their album artwork lit up behind them. Theirs was the best performance of the weekend. The energy and enjoyment of the large band was reflected in the atmosphere of the partying crowd as the night progressed, with dance routines going out all over the place. ‘Busy Earnin” was always going to go down well, but there wasn’t a track that got any less of a reception than others. 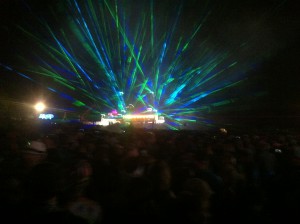 Annie Mac, surrounded by sparkly palm trees, gave an enjoyable but mediocre house set: saved by her finale of N-Trance’s ‘Set You Free’. She could have learned something from her proceeders, headliners for Saturday, The Chemical Brothers, in terms of visuals. The electronic duo played it safe and opened with ‘Hey Boy Hey Girl’, which was a good move to get the crowd on side straight away. Their visuals throughout the set were enchanting and exhilarating, including: safari animals, children, roller bladers, and fast moving images. The visuals added to the atmosphere of the set as they worked through a large chunk of their repertoire, including new track ‘Go’ and the notable ‘Galvanise’. Apprehensive at first, they turned out to be the best Saturday headliner and gave a better performance than the rest of Bestival’s headliners this year. The night was rounded off by Annie Mac Presents at The Port, which was fuelled by colourful lasers, smoke and a big crowd.

The onslaught of lack of sleep meant Sunday wasn’t a busy day for music for many. 19 year old Låpsley suited the mood perfectly, and drew a decent crowd despite the early time. Her performance showcased her amazing voice, as she admitted that the day before she was “crawling by four” (which a lot of people could probably identify with). There was something of a Radiohead inflection about one of her newest tracks, ‘Burn’, with ‘Hurt Me’ bringing a more synth heavy sound.

The Jacksons were the biggest disappointment of the weekend. Everyone knows The Jackson 5’s repertoire, so it should have been a stellar performance to get people dancing. In reality, they seemed lost sound-wise on The Main Stage, and their music fell a bit flat. That doesn’t mean that they didn’t get everyone involved with ‘ABC’ though, but it didn’t have the ‘oomph’ that it could have had. Sunday night was improved slightly by Missy Elliot, who, although technically and musically not that great, gave an energetic and amusing performance. There was too much forced enthusiasm from the speaker on stage though, who attempted to hype the audience up whilst we waited for Missy Elliot to arrive. ‘Get Ur Freak On’ and ‘Lose Control’ were always going to go down well, and Elliot threw Reebok trainers into the crowd, so some people definitely went home happy. A constant downpour forced crowds to seek shelter in The Big Top for Skepta, but it didn’t seem to dampen the atmosphere of the last night.

Musically, it was Saturday that took the trophy for Bestival’s Summer of Love. That aside, everyday had something different, and the festival achieved a chilled out and unhurried atmosphere for the entirety of it. Bestival is definitely one for the escapist in us, and provided an incredible ending to the festival season.