Read more
You are at:Home»Live»Review: Thursday and Friday at Bestival 2015
By Amy Wootten on September 16, 2015 Live, Reviews

Over the weekend, Bestival-goers donned their flares and glitter in aid of The Summer of Love. I went with a very idealised picture of the festival in my head. With an Instagram feed full of pretty photos as things were being set up, it was hard not to create a pastel coloured, gazebo-filled paradise in my mind. Reaching there, the ‘look’ of Bestival was clear from the beginning: colourful, psychedelic and enchanting. Curator Rob Da Bank was definitely on point aesthetically, and it’s probably the only festival that makes itself home to llamas and alpacas, too.

After a 5am ferry, Thursday was always going to be a sleepy haze. It meant time wandering and familiarising myself with the layout of Bestival, which in my mind was the most vastly spread out festival ever. There was a certain disillusionment process to go through when realising that Temple Island was neither secluded nor miles away in a separate place, but right next to the Invaders of the Future stage – close enough that the sound actually interfered the gentle banjo picks of folk duo Floella Grace. Strange as it was to have dance music juxtaposed with folk, when walking through Bestival the constant mixture of music from every food stall, bar and tent made even a stroll from the campsite to the arena enjoyable. 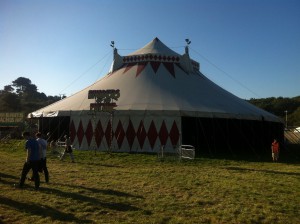 Invaders of the Future

Palace opened their set on Invaders of the Future as more of a crowd trickled into the tent. Their chilled out indie rock and confident stage presence charmed the crowd as they opened with new track ‘So Long, Forever’, as well as covering their Chasing Light EP with their most recent single ‘Head Above The Water’. They concluded their set with a stunning cover of The Rolling Stones’ ‘You Can’t Always Get What You Want’, lowering the tempo to create a warming sense of nostaglia.

With the Main Stage closed on Thursday, everyone was left to flock to The Big Top for Jamie xx in the evening. Appealing as that may sound, the tent was overcapacity, making for an overcrowded and overheated setting. Despite being the first night, where excitement should have been bubbling, the atmosphere in the tent fell a bit flat as the set began. ‘Loud Places’ saved it a little bit, but his performance lacked the zeal that makes In Colour such a great album. Rounding off the night were Thursday’s headliners, Underworld, who produced an almost continuous set of indecipherable trance. It’s likely that most of the crowd were just waiting for ‘Born Slippy’, anyway. 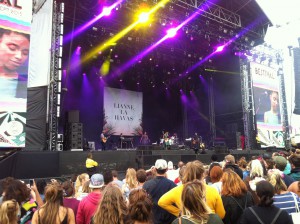 Friday was an incredible day for female artists, with Rae Morris, Lianne La Havas and FKA twigs. Each performed with precision, and gave diverse performances that set themselves apart from each other; but something they all had in common was their humility and confidence. Rae Morris bounced around The Big Top in a bronze jumpsuit, her crystal clear vocals becoming captivating. Her excitability and energy will likely draw comparisons to Florence Welch as she belted out tracks from her debut album Unguarded. Lianne La Havas’ soulful vocals easily held the audience on the Main Stage. Aided by the sunshine, a decently swaying crowd formed as she opened with ‘Green and Gold’. She radiated elegance, and was perfectly offset by her deeper backing vocals. A highlight of her set was the crowd involvement with ‘This’ as La Havas encouraged the whole audience to sing along to the bridge.

FKA twigs’ ethereal vocals faintly echoed into the audience before she emerged out of the shadows. Her crowd engagement was low when compared to Morris and La Havas; but this meant almost wall to wall tracks throughout the set. The set was full of moments of extreme intensity as the darker elements of her music reverberated around the tent, which was a perfectly dark setting for twigs. She created trippy visuals with smoke, blue lights and shadows, utilising her dance training to compliment her music. Although bizarre to those unfamiliar with twigs’ style, there’s no doubt that her performance was captivating.

The scene had already been set for FKA twigs with the psychedelic rock of Australians Tame Impala. With flares in the audience and The Big Top, again, filled to capacity, frontman Kevin Parker said that he wanted the new album, Currents, to “get people dancing” and, with a view of the crowd from outside, ‘Cause I’m A Man’ definitely did that. Stood away from the tent, Tame Impala’s sound became strangely intermingled with Duran Duran‘s ‘Girls On Film’. The Friday Main Stage headliners tactically saved their best until last, closing with crowd favourite ‘Rio’, but unfortunately that was the material that everyone was there for. No one seemed particularly interested in their new tracks, that involved bewildering inflections of house. Better than Underworld, but they didn’t play to the crowd.