Read more
You are at:Home»Live»Friday at Isle of Wight Festival
By Annabelle Asker on June 19, 2014 Live, Reviews

Hot, sweaty and tiring: the first day of the festival summed up in three words. With the press office over a mile away from the main entrance, the round trip took over an hour. Although long, it gave us a chance to gauge the sheer monstrous size of the entire festival site, as well as the resourcefulness of some of the local residents, who had set up stalls along the main road leading into Newport.

On the Friday, the campsite was relatively tidy, with minimal mud from the hot weather conditions. But this, of course, was not to last. The camping area itself was located at least 30 minutes away from the main festival site, meaning staying away from your tent was really the only option if you had a busy day of band viewing ahead of you. This forced many of us to buy the extortionately priced food on site, some of which was less than appetising. Furthermore, the queues for the toilets were the longest I had ever been in, although the toilets themselves were near luxury after the Reading festival ones I experienced last year.

Exhausted from our early start and lengthy walk, we found a spot on the grass, within view of one of the ginormous screens situated either side of the main stage which was projecting large and ever s 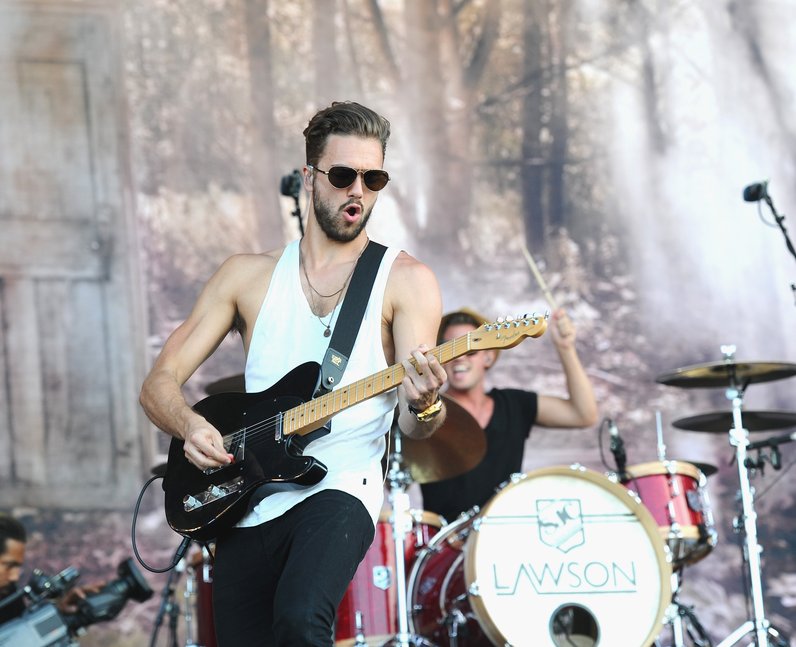 hifting live video of the band onstage. Before we could check our programme, Lawson took to the stage. With little desire to leave our comfortable sitting position, we decided to endure their performance. Pop is not an extreme enough word for the band, who’s attempted rock persona is cringe-worthy at best. The sound quality was poor, with both lyrics and lead singer Andy Brown’s interaction with the audience inaudible. Overall, I am still uncertain as to why the band had been booked.

After this less than enjoyable experience, we moved on to the Big Top Stage to watch Chlöe Howl. Undoubtedly among one of the best acts of the weekend, the singer/songwriter was more than comfortable on the stage. Belting out song after song, she kept the mood light, proving both her vocal talent and audience interaction. Her live music far

surpasses her recorded music, with surprisingly powerful vocals. Her joy was infectious, and she had almost the entire crowd dancing, including the families around the back of the tent.

Hoping for more success on the main stage, I returned to watch Tom Odell. After receiving a devastating review from NME magazine, marking it 0/10 and ‘three parts Ben Howard, five parts Adele, four parts Keane, eight parts Florence and 500 parts Marcus Mumford’s arse’, it was safe to say he didn’t blow me away. Although talented at not having to look at his piano whilst hitting it repeatedly and stirring the crowd into a frenzy with his golden locks and cheeky grins, I came away almost forgetting I had seen him. It wasn’t until I checked over the line-up to work out this article that I remembered I had actually seen him. Overall, Tom Odell is charismatic, yet musically both dull and boring in live performance.

Drum and bass music is on the rise in the UK charts, and those leading the way include Rudimental, the Hackney based quartet. Isle of Wight was the groups first ever festival they played, over 2 years ago, making their performance highly energetic and enthusiastic. Although their performance was professional and entertaining, it was the sound quality that ruined it. With their music relying on a deep bass, and the sound technicians situated closer to the stage than the majority of the audience, where I was standing lacked a depth to their music that yo

u easily get from good quality headphones. Overall, a faultless performance from a group that are hugely popular right now. Even my dad likes them.

As the main headliner for the day, Biffy Clyro set was strong, emotional and enjoyable, however it was the audience itself that was lacking. With seemingly little reaction from the crowd, the band tried its best to get the audience involved in their set, including their couple of acoustic songs that left me wanting more. They worked up a fearsome sweat, in no doubt scorching stage temperatures. However, sandwiched between Calvin Harris and Rudimental, the crowd was undoubtedly wrong for their music genre. To me, their performance was spectacular, but somehow lacking after witnessing their earth-shatteringly awesome Reading Festival set, which ended that weekend perfectly. (Click here for a full review)

Calvin Harris was to follow, bringing with him perhaps the strangest live performance I had ever witnessed. I’m still unsure whether it was actually him onstage. However, the reaction from the crowd surrounding me was ridiculous. For a tall, dorky, Scottish man standing on stage with a computer, he certainly knows how to get the crowd moving. With his only words going something along the lines of ‘Isle of Wight, are you ready?’, ‘Let me see your hands up’ and ‘Get ready to jump’, I was confused as to why people were going so crazy for him. Indeed the graphics projected onto the screen perfectly matched the timing of the music, but it merely looked like a iTunes equalizer animation. DJ’s have always confused me, and the difference between the pure raw talent of Biffy Clyro, who have refined their musical abilities over the years, using instruments and hard work, versus a man on his mac is utterly bewildering. Queen were right in saying ‘All we hear is Radio ga ga’.

Overall, the first day at the festival was long and tiring, but highly enjoyable. Although the set list was confusing, with so many genres mixing on one stage, crowd control must have been the explanation. On reaching my tent that night I fell asleep almost instantly, regardless of the whirring of the petrol generator from the food stand near our tent, or the jovial sounds of verbal harassment coming from the camp next to ours.