Bold, brash and  totally electrifying, with a stage presence that rivals some of the top signed acts of today. The Hit Ups are a Southampton unsigned student band that are already dominating the local music scene and look set to enjoy many future successes…

They describe their genre as ‘Spooked-Out-Electronic-Party-Core-Rock & Roll’ but even that can’t quite encapsulate the spirit of this synth hard rock band.

Live performances are the lifeblood for this band, and this is mainly due to frontman Josh Hughes-Games, who acts like a man possessed as soon as he crosses the threshold from floor to stage, and has the power to transform the atmosphere in any venue into one of chaos and exhilaration. His vocals punctuate the distortion fuelled melodies, whilst his ability to go from screaming rampant to soft and gentle singer, ensures that the audience never becomes bored. During one particularly memorable performance at Frequency, he climbed a stack of amps, before running into/around the crowd, rolling on the floor and jumping all over the stage, and that was only for the first song! This high impact stage persona is maintained throughout the show, with an energy that doesn’t fade or falter once.

Although, with this band you could argue that there are actually two frontmen, as lead guitarist Charlie Torrible (ex-Physoc president and recent graduate) thrashes out edgy riffs that fill any gaps left by Josh‘s vocals, whilst occasionally taking centre stage to blast out yet another solid guitar solo. 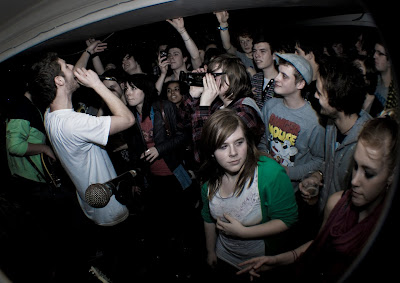 The Hit Ups comprise of members Charlie, Josh, Lewis, Sam and Nick who met as friends both before and during university. They have already been able to finesse the key ability of giving consistantly dramatic live performances. That could easily rival those of Hadouken! and other top synth hard rock acts and have begun recording tracks – two of which are available to download for free online at http://thehitups.bandcamp.com/ and promise to soon release an album. However, although these recordings are good, it is very difficult to fully appreciate this band unless you see them live as it’s the charged atmosphere, unique to them that will truly get you hooked on The Hit Ups.

If they keep on at this rate, The Hit Ups will only get bigger and better, and it won’t be long before they start to dominate the national student music scene. If you haven’t already seen them, check out their facebook group: http://www.facebook.com/pages/The-Hit-Ups/22186036309?sk=info  for any local gig news and go and see them, your guaranteed to leave feeling pumped up with adrenaline!