Since its founding in October 2006, 2000trees has maintained its reputation of being outside of the mainstream major music events. Their mission is to create a collection of over 120 rock and indie acts that get progressively more established throughout the night. 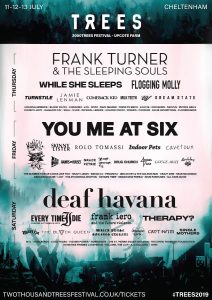 Admittedly, I had never heard of the festival before this year – but it didn’t take me long to realise that I had been missing out. Located in the Cotswolds, they have big name headliners Frank Turner, You Me At Six and Deaf Havana alongside underground indie bands, meaning you get the feel of seeing big names with the comfort and familiarity of discovering bands for the first time.

I hope that it will be a perfect combination of an earthy festival where you can relax and listen to some new bands you never would have come across during the day, and then at night jump right into the mosh pit to some of your favourite tunes.

This festival was created by 6 music fans, tired of overpriced mainstream events, and what the festival has to offer certainly does make you think the best of small and big festivals with a special independent flavour.

The relatively small festival that has a capacity of 10,000 has won many awards, such as Winner of ‘Best Medium Festival’ at the UK Festival Awards 2018 and ‘Supporter of Emerging Talent’ Champion at Association of Independent Festivals Awards, 2014.

Clearly, there is something that shouldn’t be missed at 2000trees; it’s not too late to join and find out what’s happening in the Cotswolds on the 11th/12th/13th July! Grab your tickets here.