Y Not Festival has come a long way from its backyard house party roots, and never has that been more apparent than when looking at the poster for the 2019 lineup. Foals. Elbow. Two Door Cinema Club. Wolf Alice. Make no mistake, with a headliner lineup like that, and with many more stars littered further down the festival’s billing, Y Not is poised to be the very best of this year’s smaller independent festivals. 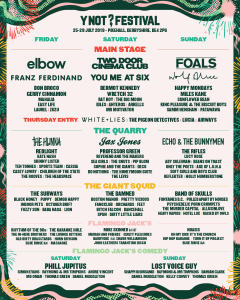 I do have to say that Y Not is a little close to my heart, being a Derbyshire native who’s seen plucky little Y Not grow from local oddity to national small-festival mainstay over the last 15 years or so (though not without the odd hiccup along the way). But there is no denying that 2019 looks set to be its biggest year yet, as those aforementioned headliners (alongside fellow headliners Franz Ferdinand and You Me At Six) get ready to put on with one hell of a show in the Derbyshire dales. Two Door Cinema Club and Foals in particular will be excited to celebrate releasing new albums this year, so expect explosive sets from them, whilst Wolf Alice, Elbow and the rest round-out an alternative & indie rock fan’s dream headline billing.

But it’s not all about those names at the top of the poster. As with sister festival Truck, there are plenty of wonderful, smaller indie and rock breakout acts to be found like IDLES, Ten Tonnes, The Hunna, Fontaines D.C. and Zuzu, ready to bring the festival stage down with electric riffs and pulsating drumlines. But for those looking for a respite from the sheer amount of indie rock to be found over the weekend, there are plenty of other big names to keep you enthralled from fantastic DJs (Jax Jones) to R&B starlets (Mahalia) and breaking singer-songwriters (Gerry Cinnamon). And that’s not to mention the fantastically bizarre Flamingo Jack’s stages, which embrace everything that makes UK festivals the ridiculously incredible events they are, from stand-up comedians to comedic DJs and cover acts.

With such a wide array of acts on offer, and possibly the best headliners of any independent festival in 2019, Y Not looks set to be an unmissable event when it heads to the Derbyshire dales from July 25th-28th.

Final tickets are still available for Y Not Festival from July 25th-28th here.