With headliners including Twenty One Pilots, Martin Garrix, The Strokes and Migos, Lollapalooza Paris literally has something for everyone. The two-day event taking place at Hippodrome de Longchamp sits on the outskirts of the city centre, hugging Paris’ ring road. Over the 20th and 21st of July, rap, indie, rock and pop are just some of the genres that will be featured at the festival. 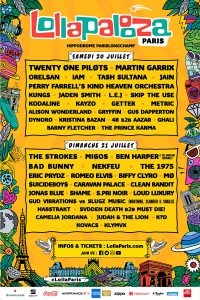 This global festival brand began way back in 2003 in Chicago and has since gone from strength to strength. Lollapalooza Paris joined the bevy of countries flying the Lolla flag in Stockholm, Berlin, Argentina, Chile and Brazil back in 2017. Since its inception, Lolla Paris has prided itself on its genre-defying diversity and its inclusive atmosphere. In previous years, Red Hot Chilli Peppers, The Weeknd, Imagine Dragons, Lana Del Rey, Depeche Mode, Gorillaz, The Killers and Travis Scott have all made an appearance at the Parisian multi-genre festival. On top of all the music, there’s also the Lolla Planet, Lolla Chef and Kidzapalooza spaces dedicated to the planet, the gastronomic and families.

Joining Twenty One Pilots (who recently received a five star review from The Edge for their London tour date) and Martin Garrix on the Saturday will be artists including Jaden Smith, Kungs, Kodaline and Gus Dapperton, who came over to the UK back in February on his first European tour and stopped off at Southampton’s The 1865. On the Sunday, alongside The Strokes and Migos, Ben Harper, The 1975 and Biffy Clyro are also among those performing. With this much variety, Lolla Paris isn’t just a celebration of music but a celebration of the beauty and diversity of music festivals.

Watch the aftermovie for the 2018 edition of Lolla Paris below and buy your tickets for this year’s festival, taking place from 21st-22nd July at the Hippodrome de Longchamp in Paris, here.