South West Four is back again this August bank holiday, with the EDM festival rocketing in popularity recently compared to its more humble and initimate setting back in 2004.

Set in Clapham Common, SW4 once again brings the best of  electronic dance music with notable exclusices and world class DJs now being a standard. 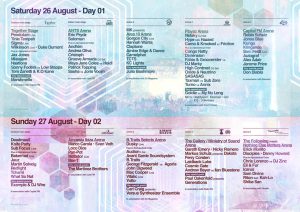 The biggest draw of this year’s festival is unquestionably the live return of drum & bass kings Pendulum. After a live hiatus of six years on UK soil, the Aussie band are infamous for electric live oerformances with a back catalogue large enough to cement their place at the top of the genre, despite their long awaited return. With songs such as ‘Watercolour’ and ‘Propane Nightmares’ the perfomance is sure to be unforgettable.

They are joined on the Saturday by world reknowned Sigma (live), Wilkinson (live), Duke Dumont, and Marshmello – with music legend Eric Prydz simulataneously taking over the indoor stage.

As is standard with SW4, the Sunday lineup pulls as many punches if not more. With Deadmau5 back in London for the first time in three years, the explosive Knife Party, and Sub Focus bringing his new live show to the main outdoor stage, the entire weekend promises to be the  best SW4 yet.

With a variety of stages at Clapham Common, there is a multitude of artists to satisfy all EDM taste buds, and the easy access by various tube lines to the venue makes SW4 stand out due to its city location.

In summary, South West Four provides one of the best festival esperiences with a plethora of world class EDM artists at a fraction of the cost of larger festivals, but with all of the memories and enjoyment a bank holiday festival should induce.

Tickets for SW4 can be found here.