Although it may be impossible for anyone to top Stormzy's legendary headline set, day 2 of Reading Festival proved to be just as enjoyable as the first. 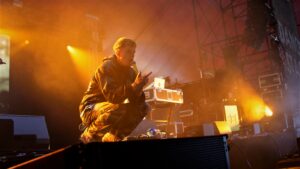 After Stormzy’s explosive finale to the first day of Reading Festival, it felt like the weekend couldn’t get any better. However, day 2 began in high spirits with some early morning moshing from aptly-named band NOISY in the BBC Radio 1 Dance Stage, who drew in a surprisingly large crowd for such an early slot. They reminded me of other indie-rock bands such as Rat Boy, who often prioritise the crowd over their own sound.

Though afterwards, the tent quickly became more mellow as indie-pop singer Will Joseph Cook took to the stage, armed with a guitar and decked out in a hippie-like haircut and headband. The sweet, melodic tunes of Cook were perfect for the morning, with tracks like ‘Girls Like Me’ and ‘Be Around Me’ allowing for a quick singalong moment.

The rest of the day was dedicated to the main stages, beginning with Beabadoobee on Main Stage East. Since seeing her at Latitude Festival in 2019, where she was rather nervous and new to the scene, it was pleasing to see that the young singer has gained much more confidence – she was completely cool and collected in front of such a large crowd, and was able to command their spirits with a few words and a strum of her guitar. 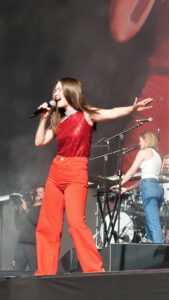 After Beabadoobee came Norwegian pop singer Sigrid, whose energy and excitement made her a highlight of the day. Pop bangers like ‘Strangers’ and ‘Mirror’ prove Sigrid to be at the top of her game in pop music – with so much confidence and spirit, she is able to win any crowd over in an instant.

The layout of Reading Festival means that often you are rushing between the two mainstages (East and West), on which sets begin a few minutes after the opposite stage has ended. Because of this, I experienced the mania of Slowthai from the very back, mainly watching from the screen. Although the rapper was clearly excited to be on stage, I found that the first third of his set was made up on forgettable tracks that didn’t show his true unique sound – it wasn’t until he played songs like ‘Deal With It’, ‘My High’ and ‘Momentary Bliss’ that I found myself getting into the set. If anything, Slowthai just made me wish that he exclusively made Britpop inspired music.

In-between slowthai and the end of the night was a brief indie interlude from The Wombats and Two Door Cinema Club, who played one after the other on the West and East stages respectively. There’s not much to say about these two acts, except that they have been doing the same thing for years – and doing it well. Adding these bands to your lineup is a surefire way to get some quality musicians who know their way around a festival crowd.

To close the night slightly earlier, we decided to treat Disclosure as our headliner – and what a set it was. Disclosure seem to have perfected what they do; a solid set of continuous crowd-pleasers, complete with impressive visuals and lasers, made for an impactful end to the evening. 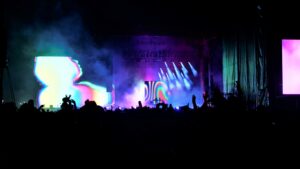