An enjoyable first day filled with exciting music, ranging from the newer to the older.

Arriving on the Friday of Reading Festival when campers have already been set up since Wednesday means that you are thrown straight into the thick of it: picture fields and fields of excitable (mainly young) people, sitting in their haphazardly put-up tents with last night’s antics littered all around them. Now imagine thousands of these people all rushing into the opening of the arena at 12pm, ready to dance their socks off. Before anything had even started, the crowd was already pumping; it was certainly clear from the start that people had sincerely missed festivals over the past 18 months. 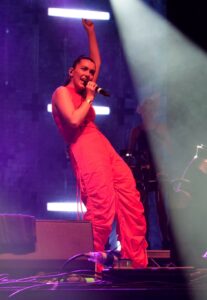 Opening the show on the BBC Radio 1 Dance stage was up-and-coming dance pop sensation GRACEY, who powered through the deadly morning set with high energy – despite many issues with the sound. I was expecting an empty crowd, considering the time of day, however the tent was almost full of people ready to dance and sing at such an early hour.

Next it was over to Main Stage West to catch Sports Team for a solid 30 minutes of indie bangers. Lead singer Alex Rice put everything into the set, running across the stage and climbing up its structure. However, most memorable of the performance was the maraca-shaking and tambourine-banging member of the band, who stayed fully serious throughout the entire set – despite the fact that he wasn’t even mic-ed up.

As we moved into the evening, the day began to get more exciting. A true standout of the day was punk-rock duo Nova Twins, who blew the crowd away with their incredible outfits, screamo energy, and punchy bass-lines.

To end the night, we moved over to Main Stage East for AJ Tracey – although this was mainly to get a good spot for Stormzy. Although the crowd went wild for Ladbroke Grove, the rest of the set was relatively mundane; the combination of slower R&B tracks with no real dancing capability, and a lack of energy from AJ himself meant that the crowd weren’t dancing very much. 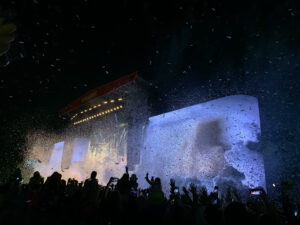 Despite the previous disappointment, what everyone was really there to see was grime legend Stormzy. This was by far the best set of the day – Stormzy brought an incredible unwavering energy to his performance which kept the crowd jumping the whole night. Armed with dancers, friends and family, a brass band, soulful backing singers, an incredible solo guitarist, special guests including Dave and Tion Wayne, and fireworks to top it all off, Stormzy was unparalleled and completely in his element. It felt like he had taken his legendary Glastonbury set and taken it to party level for the notoriously vibrant crowds of Reading. It is heart-warming to see an artist who’s craft means so much to them; Stormzy’s set was full of a genuine passion which passed on to the entire crowd, and carried us through to the end of the night.