Basing a Fringe set off nothing but addiction and a deck of cards is a bold starting point. Standing in what seems like a cave, hot and close at the 2019 Edinburgh Fringe; Aidan ‘Taco’ Jones is a brave and very funny guy.

Melbourne-born and half Colombian, Jones is a pretty short guy with the personality of someone four feet taller. He has a huge, kind and friendly presence and the style of his set; half honest talk, half comedy and really feels like a chat with an old friend. The premise of his set is simple. Jones made the choice to pursue comedy when he was twenty and living a life he wasn’t proud of. Binge drinking, messy relationships, substance abuse; Jones tried A LOT. And so, he took a deck of cards and the plan of drinking one day a week for a year-end kept a card sized journal of every drinking day/how the week treated him. A great idea, and a very creative way of changing his life and keeping track of major life events and travels. These cards take Jones all over the world, and have incredible stories attached to them, some sad, some hilarious; all making excellent and engaging comedy.

This style of comedy and storytelling was fairly new to me, I had not seen someone being so frank about their life choices and how they lived in a way they don’t necessarily agree with anymore. It was so refreshing to see something so honest, about life, love, heartbreak, personal development and family, while also creating an engaging and hilarious comedy set.

The skill of Jones, to be able to hand out cards to the audience, any out of 52 (without jokers, of course), and to allow them to pick the direction of his set, and just to know which story was coming and what to say was something to behold. It is incredibly clever to be able to remember that many stories, to tell them in a creative way and to engage with an audience. 52 Days was a truly amazing set, and he is such a friendly and quick comedian.

I implore you, if you ever get a chance to see Jones live, please do. I couldn’t stay away from his show last year, and it is so important that we support comedians like him. 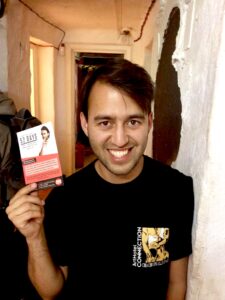 I am a philosophy and politics student, who loves theatre, music and all things associated. Should really start doing my degree instead of collecting hobbies and drinking a lot of wine and a concerning amount of coffee. Blogger and News and Investigations Editor for Wessex Scene.