The ball this year may be sleeping with the fishes. 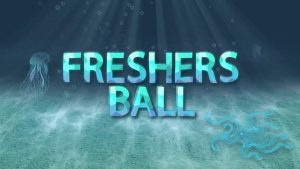 The Student Union hosted their final freshers’ event of 2019, the ‘Under the Sea’ themed Fresher’s Ball. This is a highly anticipated event for all those starting university and wanting to spend an evening dressed in their sharpest attire. Pulls to the event included a deep-sea aesthetic, Radio 1 DJs Scott Mills and Chris Stark (followed by SU regular, DJ Adrian Murphy), as well as live music, a silent disco, discounts on food, and a free drink.

The nautical aesthetic of the evening was shown almost immediately as photo opportunities in front of a large inflatable octopus and underwater scene were set up in the entry way. While this was an important feature for many freshers who were looking to use this event as polished Instagram posts, it took attention away from The Bridge, which was the location of the silent disco. This was a popular part of the evening (if you could find it), with a vast multitude of headphones playing either rap or cheesy music, and was an entertaining addition as expected. The crowds here were replicated in the form of a confused line outside The Plant Pot, where attendees were given a £4 off food voucher with their ticket. This, though being a great touch, made the affair feel a bit school-disco-esque, where small trays of chips were eaten awkwardly throughout the venue (and the rubbish even being found littering the way to the bus station afterwards). Most of those who exchanged their food voucher found themselves in the adjacent room, which was filled with relatively tacky décor and a particularly delightful live band from The Northwall Collective. This room had a different feel to the rest of the ball with its relaxed sofa areas but was sadly tucked away on the wrong side of a busy queue and not used to its full potential. Downstairs in The Cube, freshers were treated to a colourful DJ set by Scott Mills and Chris Stark (Radio 1) which mostly took the form of club anthems and excited vocal additions. This part of the ball was particularly bustling and included some victims of too high heels, too long dresses, and too many layers. Mills and Stark swapped over with Murphy around 1.20am and took half the crowd with them. Most of the songs from this point onward were repetitions from earlier on and not even the creative light displays could distract from this. There was mention of aerial artists, but this was neither seen, nor heard, and didn’t fit with the theme that the SU tried so desperately to sell.

As the first SU event to finish later than 2am, it was thought to be an entertaining and wild ride. Reviews from years prior sold the event as something unmissable and one of the best evenings to spend with new flat or course mates. Unfortunately, it seems the fresher’s ball of this year slightly missed the mark, focusing too much on aesthetic (which is typical of this difficult yet popular theme) and not enough on the entertainment. This being said, not even the decoration was safe from circumstance, with the waterfall features on the middle level being prone to overflow, causing a slipping hazard that needed to be covered with cardboard boxes. While the fresher’s ball did not live up to expectations, it certainly did give many people a great story to tell and allowed them to feel more confident in themselves and that bit more adult. It may not have been worthy of the £25 ticket price, but it did have its positive features, and can’t be overlooked as a night full of fun, frolics, and underwater shenanigans.