Read more
You are at:Home»Live»Features»“Write about something that is real to you, because what you put out there will be real to them” – An interview with Neil Sanderson of Three Days Grace
By Jo Lisney on October 4, 2018 Features, Interviews, Live

On a chilly 1st October, Canadian Rock band Three Days Grace and American rock band Bad Wolves hit The Pyramids Centre in Southsea for the first time. Though this is not the first UK and European tour for Three Days Grace, it is for Bad Wolves. Amongst the hustle and bustle of stage set-up, sound check, light tests and rehearsals, Three Days Grace’s drummer, Neil Sanderson, took some time out to talk to us.

First off, I told him that it was lovely to meet him and thanked him for meeting me. I also apologised for the delay as there had been severe traffic, to which he replied, “don’t worry, these things happen.” Anyway, I started by asking him how he would describe the new album in three words. “I’d have to say it’s definitely a journey!” Neil enthused. “[Also], it’s about wanting to escape (pausing to think) crisis.” There is certainly a personal touch to their latest album Outsider, capturing what it feels like to be an outsider and what it feels like to look in. Leading on from this, I asked him what his favourite song is to play and why – Neil answered: “Right-Left-Wrong, which is the lead track. It sounds like we are embarking on a new journey […] which I think sets the tone of the notion of this album. [This notion that] a lot of people wanna take a big step out of the picture and try to make sense of the absurdity from a distance [which]involves a sort of escape.”

Since 2013, Matt Walst has been lead vocalist for the band after they parted ways with former frontman Adam Gontier and has provided vocals for the albums Human and Outsider. “It’s amazing to see [a positive]reaction. I think what helped a lot was that we didn’t wait for new music. We put out ‘Painkiller’ then subsequently, we put out ‘[I Am] Machine’ and so, it kinda showed people what the new direction was. People really embraced it and it was commercially successful.” He added: “it’s been crazy to think that it’s almost been 6 years now! I think on Outsider, Matt really found his stride.” Neil continued to show his admiration for Matt as “he is very comfortable and confident in the vocal booth, in his performance and his contributions lyrically – I think it came from 6 years of straight touring!”

We spoke about what was next for the band after touring Europe – which kicked off on 1st October in Southsea and finishes 3rd November in Russia. Neil stated that: “we’re just really starting up now, so we’re going to be going really hard!” He looked at the others in the room. “We have this whole European tour that takes us all the way to Russia, […] then we have a [full headlining]Canadian tour, and we haven’t announced it yet, but we have a really big tour coming up in January, February and March that takes us to the US and Canada.” How exciting! He added: “and we’re going to keep going […] we love the UK festivals in summer, so I think we’re gonna try and maybe get back over here, [and]do some of those. I love Download [Festival], it’s so much fun.” I pointed out that I had seen videos of their performance from Download 2015 which everyone should watch to get a feel of how great their showmanship is like!

We headed back to Three Days Grace’s dressing room as it was a bit too hectic to hear. I shyly said hello to the others, who were sitting in and listening to me chat to Neil. Continuing, I wanted to discuss what the band meant to him as I had mentioned what it meant to me in my preview. “I mean, it’s my life ya’know? It’s amazing. Whenever you work [hard]on something, it sorta becomes your purpose in a way. To see it as successful as it has been, has been really mind-blowing; it’s therapy ya’know? It’s a reason to wake up every day […] and to do it on this level is very gratifying when you get up on stage.” Since Outsider has been such a success, I asked how they set about writing this. “[After finishing] a big world tour, we weren’t very inspired […] so we escaped, way out to the Canadian woods […] we stayed out there and just hung out.”

Getting more comfortable with Neil, I decided to ask more personal questions, to get to know him better. This kicked off with dead or alive, who would he love to tour with and why? Without hesitation, Neil exclaims “Tool!”. He went on to explain “[…] they are my all-time favourite band […] I could definitely watch them every single night.” When asked about what his plans were with his time off whilst in the UK, Neil smiled – “I wanna check out the D-Day museum actually – if I have time. I’m kinda into war history.” Ah, Portsmouth… this is the place for you Neil. He clearly did some research as “there [was]a lot of war staged right where we are sitting right now. I’ll definitely check that out!”

With a fourteenth number 1 under their belt with ‘Infer-red’, success comes with staying true to yourself as “[you dig deep]into yourself and your heart. Write about something that is real to you, because [what you put out there will]be real to them.” He later added, “so [having]that connection to fans […] [means]that through our songs, they can hear moments of their lives in that – it’s a powerful thing.” Speaking of fans, “British fans are really energetic and really open-minded to different types of music, not that north America isn’t, but over here people welcome hearing something new and fresh. And the UK has always tended to be on the front lines of something new […] a lot of fresh stuff comes out of here that the rest of the world follows.”

For many, Three Days Grace marks a staple in people’s lives and encourages them to try music as their art. For those who are buddying musicians, Neil advised “[similarly to the recipe for success], just stay true to yourself and don’t write for other people. [Also] learn some sort of recording programme. […] Having that makes it easier to start to learn and creating.”

As the interview ends, I thank Neil for his time and the others in the room applaud. They ask me about local pubs and invite me to come have a few with them afterwards, to which I sadly decline as I have to get back to Southampton. Before I leave, I ask if it is ok to have a cheeky selfie with him, but he is confused as to what I mean. He thinks I mean for me to kiss him on the cheek. Who would have thought that he wouldn’t know what it meant!

Catch Three Days Grace at any one of their other UK tour dates by following the link here. 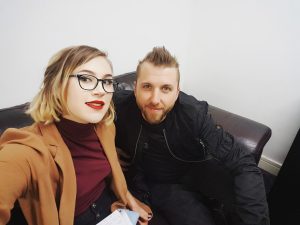 credit and owned by: Joanne Lisney