Redemption achieved for the unfortunate cancellation of Camp Bestival’s final day, by providing one of the most uplifting and inspiring events I have had the pleasure of experiencing.

Bestival represents everything that a festival should: spectacular vibrancy with an unparalleled aesthetic, an ability to showcase some of the most remarkable live acts on the planet, and all whilst maintaining political and social undertones that passionately strive for a better and happier world. This year’s instalment exuded all aspects of this in glittering abundance. Bestival is renowned for its vibrant eccentricity, and since moving from its original site on the Isle of Wight in 2017, has grown to become one of the largest and the most prominent festivals in the country, and after the cancellation of the final day of the event’s sister festival Camp Bestival the organisers had a lot to make up for (spoiler alert: they definitely did make up for it). So without further ado, let me take you through one of the most incredible weekends as circus themed extravaganza adorned the Lulworth Castle grounds.

Upon arrival at the sun basked Dorset site the tone for the weekend was immediately established. A hoard of anticipating, glitter-bejewelled, and frankly rather clammy festival goers erred through the campsite, eager to get the begrudging task of tent-erecting swiftly out of the way. However, once freed from the shackles of the weekend’s only tasking half an hour, the luminosity of Bestival’s gigantic arena drew us in like a homing beacon. Endowed with colourful flags and drapery, with lights and fire, the arena was undoubtedly one of the most scintillating I have seen. As we made our way around the enormous central disco ball, dwarfed by the effervescence of the illuminated Lulworth Castle that proudly stood atop the hill, it became clear that the festival was to be a feast for the ears, a feast for the eyes and a feast for the mind. 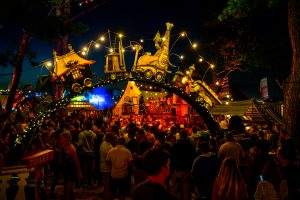 With the mainstage closed, as the official first day of the festival was in fact Friday, we made our way to the Big Top in the late evening for the first act of the weekend. The stage, a bright red Circus tent visible from anywhere in the grounds, was packed for CASisDEAD to christen Bestival 2018 with a high-powered and authoritative set that launched the crowd into the deep end straight away. No half-measures here. The next act we saw was Kelela, as she also took to the Big Top stage with a performance that showed class and feistiness in equal proportions. Dressed in white amongst the ever-darkening night, Kelela shone as the night’s most impressive act for me. More significantly, perhaps, was the fact that Kelela was the first of many black and minority female acts to be given such a good, and quite clearly well-deserved, platform across the weekend, starting off a series of performances that highlighted black female excellence along with the likes of Jorja Smith, Chaka Khan, Grace Jones and M.I.A. to name a few.

As we headed into the early hours of the morning the evening entertainment was far from done. Expectedly, the droves of festival-goers had loosened up and were ready to get their groove on for the night’s headliner, the impeccable talent Jorja Smith. Having only just received a Mercury Prize nomination for her debut album Lost & Found, the 21 year old singer songwriter was in prime position to justify the huge commercial and critical success she has been laden with in her fledgling career, and she didn’t let us down. A set inundated with suave and sophistication showcased the smoothness of her R&B vocal tone which melted the crowd with more ease than the 30 degree heat earlier in the day. A truly blessed way to start the weekend.

Woken, as would become a trend, by the outside heat penetrating the tent at 7am, we were greeted with swarms of more festival goers piling into the campsite as Bestial really started to begin in its full form. With last night being a mere taster for what was to come, Friday became the true start of an incredible few days filled with outstanding music.

After the necessary boozing (hydration is key, kids) and layering up of the factor 50, we were ready to once again venture into the throbbing arena that was filled with music coming from all directions. Starting on placid terms we went to see Mt. Wolf, once again at the Big Top, where the band’s mellow tunes and relaxing hymns were the perfect calm before the storm. Before long we had reached the main stage, directly facing Lulworth Castle, in scorching heat but excited to see the all-female four piece The Big Moon. Despite the heat, the band’s indie tunes and dynamic harmonies were so impulsive and lively that they drew the crowd out from under the shade-providing tree located adjacent to the stage. Ripping through an inspired cover of Bonnie Tyler’s ‘Total Eclipse of the Heart’, the girls invited us all to see them perform the same set later in the evening at The House of Vans Stage, and based on the first performance we couldn’t wait to do it all over again. Second time around was arguably even better, with The House of Vans stage being significantly more intimate, and also entirely shaded. 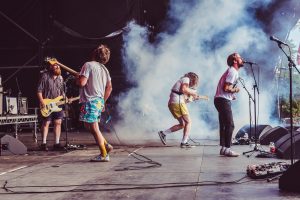 However, sandwiched between these two performances we managed to catch what was probably one of the best performances I have ever seen in terms of pure entertainment value. Dragging my mate to see Idles, a band he had never heard of and one that I only really knew off reputation, we were both expecting a performance that might be a bit lively but lacking in substance. Never have I underestimated anything as much as this. From the off the five-piece injected an exuberance that is truly astounding. Microphone stands sent flying; lead singer Joe Talbot essentially doing stand-up comedy in between songs and sprinting around and behind the stage; guitarists delving deep into the crowds before hauling some fans up to play to the crowd; the guitarist stealing and running off with the drummer’s symbol; a drum kicked off the stage; and dedications to the NHS, asylum seeking refugees, and Talbot’s wife, this set had it all and more. A breathless set saw a lusting crowd quickly turned into diehard fans of, as Talbot joked, the “Sleaford Mods tribute band”. The band left the stage, warning them not to read The Sun as it’ll give you cancer, and just like that I was in love.

After a hugely eventful day so far, we later went back to the Castle Stage to see Mura Masa complete a dance-inducing set that drew the biggest crowd of the festival at this point, everyone was engaged from old to young, however still not living up to the hype that Idles had created. Nonetheless a fully enjoyable performance from a man who has come so far and still has a huge future waiting there for him. Back to the Big top again for us, this time for Sundara Karma, who had the tent filled to the rafters for their banging indie-fuelled set of upbeat tunes that ensured the crowd not only sang along throughout, but etched the likes of ‘Flame’ and ‘She Said’ into my mind so deeply that it was stuck in my head for the remainder of the weekend. Following on, as we delved right into the night, Django Django entered the festivities with a psychedelic performance that perfectly set up the crowd for a night of raving at the many DJ sets.

Seeing where the night took us, this was the first time we stumbled across the Caravenserai, a section compiled of old bumper cars and fairground paraphernalia as well as antiquated caravans. Boasting its own circus-like tent fully equipped with DJ booth and a stage for smaller bands to take us through until sunrise as well as an outdoor stage, this was to become our go-to area as we partied way after the main stage closed for the night.