Redemption achieved for the unfortunate cancellation of Camp Bestival’s final day, by providing one of the most uplifting and inspiring events I have had the pleasure of experiencing.

Another beautifully sunny morning in Dorset saw our neighbours, dressed as Sergeant Pepper era Beatles, celebrating one of their friend’s birthdays by recruiting anyone nearby including the fire safety team to wheelbarrow race across the campsite. I think Ringo won. Heading once again into the arena we were greeted with a human cannonball flying just below the castle to a rapture of applause. What better way to start your day?

Back to the music then, and the first act of the day was Confidence Man, a band that provided one of the more odd performances of the weekend. The Australian indie-dance group had the two lead singers perform choreographed routines whilst the rest of the four piece were half naked bar the black funeral-esque veils on their heads. Weird to say the least, mildly concerning at best. Following up was Black Honey, who ripped through grungy renditions ‘Corrine’ and new single ‘I Only Hurt the Ones I Love’, continuing Bestival’s dosage of rock music for the weekend. Look out for their new album coming this September, it’s certain to be a stormer if this performance was anything to go by. Impressively, lead singer Izzy Baxter immediately joined the crowd at the end of the set to give out free CDs that she also happily signed whilst taking selfies with some of her fans, myself included.

Back at the Castle Stage we saw Thundercat breeze through his funkadelic bass-heavy set that saw the majority of his album Drunk played out to a grooving crowd. I myself, glittered up by the Oxfam volunteers, was paling in comparison to some of the many extravagant outfits and costumes that were about in celebration of this year’s circus theme. As the set closed, the world’s biggest confetti canon shrouded the crowd in even more colour. Later, Swedish duo First Aid Kit took to the stage in what was one of the most powerful and moving performances of the weekend. Their set was not only littered with some absolute ingenious songs such as ‘My Silver Lining’ and ‘Emmy Lou’, but also heartfelt impassioned speeches concerning the injustice of victim blaming that got the crowd gathering in support. A truly impressive set that saw both the musical ability of the folk pair and there inspirational qualities in the fight for social justice. 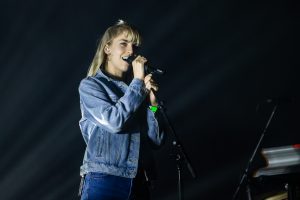 Again the day was won by female acts, displaying excellence across genres. However, none were as impressive as the night’s headliners London Grammar. The act I was most looking forward to seeing left a group of strapping young men behind me in tears at the end of ‘Big Picture’. The minimalism of the monochrome set, with just the trio on stage, only highlighted the purity and unmatchable quality of lead singer Hannah Reid’s impeccable voice. Reid had the crowd in awe from start to finish, from stage to castle there was absolute silence and only mere appreciation. Similarly, Reid managed to get the crowd hyped up enough to boo a man who decided to climb up a tree until he jumped down at the request of the festival safety team. Ultimately the set was flawless and incredibly emotional, with London Grammar firmly establishing themselves as worthy festival headliners.

Heading straight from the main stage, we reached the HMS Bestival stage where a congested crowd lusted for the start of the legendary Faithless’ DJ set at the foot of a huge ship-shaped set up. Aboard the ship was a cluster of dancers with fireworks going off behind as we were taken into the depths of the penultimate night in true rave fashion. From then we went back to the Caravenserai where a cultish band dressed as aliens sang about preserving the Earth and the vitality of water for an hour, taking us to a different world but perhaps not in the way they intended. What is particularly impressive about Bestival is their ability to make you forget that you have a tent waiting for you to climb in for slumber, trapping you in a wonderful menagerie of DJ sets and eclectic circus performers such as the fire-breathers we saw next to the giant glitterball, ensuring you never want to leave.

Waking up to the sad realisation that it was to be our final day at the festival was unwelcome news. However, if anyone was to brighten up our day it was surely the first act, Beans on Toast. In his own typical style, Beans on Toast took us through political and social comedic folksy acoustic tunes that provided humour and passion without end. He treated the crowd to his song that he was asked to write for the previous week’s Camp Bestival performance that was unfortunately cancelled, that was aimed at trying to reintegrate children with nature, as well as his anti-war song ‘War on War’, and telling us his fool-proof plan of getting David Attenborough to shoot Donald Trump. He spent the last half of the set down in the crowd, with the security letting him get on their shoulders for a song as he drank his way through a couple of pints. Altogether the set was a much needed shower of positivity. 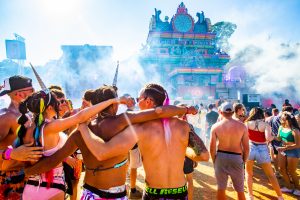 Later on, as we ambled back over to the main stage we were joined by what seemed to be the vast majority of attendees, as waiting for us was the ten time Grammy winner Chaka Khan. In all honesty no one really knew the first three quarters of the set list that included songs from when she was with the band Rufus, but it was clear to see that the disco icon still had a powerhouse of a voice. Yet, once Chaka burst into ‘I’m Every Woman’ the crowd was at its best, belting out the song word for word and making the most noise it had all weekend. This was only to be repeated when she came back out for her encore and took on the classic ‘Ain’t Nobody’, leaving the crowd dancing long after she had left the stage.

Plan B was next up on the main stage, performing his hits ‘She Said’ and ‘Prayin’’, reminding us of a talent that has perhaps been overlooked for too long. The British MC and actor’s set list was largely made of songs from his 2018 release Heaven Before All Hell Breaks Loose. Plan B seemed like a man on a mission, reconfirming his star ability with a crowd that had quite probably forgotten about him prior to his announcement at the festival. All too easily we seemed to have forgotten how good his voice is but this was a timely reminder.

The final act at the Castle stage for the weekend was the third and final headliner M.I.A.. Introduced as the “original bad girl”, the British rapper and singer, clad in tiger print one-legged trousers, began a set filled with up-tempo beats with tinges of Bollywood and afro beat resulting in a multicultural extravaganza that got the whole crowd on their feet. M.I.A. spent much of the set interacting with the crowd, even passing her mic to one girl in the audience to tell us why we aren’t all born free in a set that was not only extremely fun-filled but also politically defiant and poignant. Born to Sri Lankan parents and growing up in India, M.I.A.’s performance acted as an inspiration to minority communities, and was also musically an absolute crowd pleaser, especially as the audience put their gun signs in the air as she took us through her smash hit ‘Paper Planes’.

As the festival drew to a close, there was still time for a few more DJ sets as we tried to hold on for as long as we could. Heading down to the Temple stage, a sub-continental designed sanctuary, we were halted by the ‘End Show’ that saw high rope artists tower above a huge crowd below, complete with fire and about fifteen minutes worth of fireworks that would put any other firework display to shame. Moving on we were immersed in undoubtedly the weekend’s biggest crowd with tens of thousands dancing to the delights of Rudimental at the Temple stage for one final dance.

Bestival truly outdid itself this year. The Rob da Bank curated festival was an outstanding display of music, of culture, of art and ultimately entertainment. From hardcore ravers to families with young children, Bestival offers anything you could ask for and is truly an unforgettable experience.