It’s fair to say that Truck got off to a poor start. Queues to enter the festival and receive wristbands on Friday morning stretched back for over a mile, meaning that festival goers were forced to stand in line for 3 to 4 hours laden with heavy rucksacks, tents and sleeping bags. Given that the gates opened at 10 am and the first acts began performing at midday, this meant that by the time most people were in and had set up their tents, a whole afternoon of music had been missed. Organisers blamed the chaos on people arriving early but knowing the volume of tickets sold one would hope that entry would have been better planned.

The weather forecast for the weekend was dismal and unfortunately proved to be accurate, with heavy rain on all 3 days quickly turning the campsite and arena into a swamp of ankle deep mud. Those who didn’t bring wellies were forced to tie plastic bags over their trainers, although one or two decided to ditch the shoes entirely and go barefoot!

A festival in England wouldn’t be complete without a bit of wet weather, and the majority of the crowd accepted the British summer as part of the experience, happy to splash in the mud to their favourite bands. Friday’s highlights included Slaves, whose anarchic lyrics, edgy drumbeat and guitar riffs energised the crowd, with a healthy helping of moshing and dancing despite the downpour. Headliners Franz Ferdinand led listeners in singing along to classics such as ‘Do You Want To’ and ‘Take Me Out’, both of which were epically boomed out by 10,000 voices. 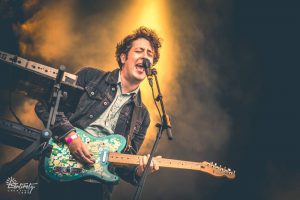 Saturday’s line-up was undoubtedly the most hotly anticipated of the weekend, featuring favourites such as Sundara Karma, Nothing But Thieves, The Wombats and The Libertines. Oscar Pollock, lead singer of Sundara Karma, encouraged the crowd to get involved in a good old fashioned mud fight, partially in vain as the majority of onlookers made a hasty getaway. Their indie-pop songs, however, were much more popular, with not a single beat or note missed in hits such as She Said and Flame. The rain seemed to clear for The Wombats’ performance, which drew huge crowds eager to dance along to their upbeat tunes. With their customary stuffed wombat toy perched on top of one of the speakers, the Liverpool band kept the crowd moving through an hour of smiley numbers including favourites like ‘Moving to New York’ and ‘Jump Into the Fog’, finishing on a high with everyone jumping along to ‘Let’s Dance to Joy Division’.

Aside from the more well-known bands on the main stage, Truck featured numerous up and coming artists on smaller stages in several huge circus tents dotted around the arena. One such band was The Magic Gang, who have been gaining more and more air time on popular radio stations such as BBC Radio 1. Their Saturday performance in The Nest was packed out, with people rammed in shoulder to shoulder and the remainder of the crowd spilling out of the tent. Interestingly named Peaness (if you really don’t get it then say it out loud), also played in The Nest, rousing a damp and hungover throng on Sunday morning. The all-girl trio bashed out loud and bouncy indie tunes that were catchy and easy to dance to, and got the day off to an animated start. Other notable newcomers included The Rhythm Method, Alpha Male Tea Party, Outlya and Yonaka.

Sadly, the atmosphere on Sunday afternoon began to go downhill. The relentless rain and mud started to dampen spirits, with campers starting to pack up and leave before the festival had finished. Wading around in thick mud grew tiresome, and with the conditions underfoot so soggy and little undercover areas to sit down in the arena, there was nowhere to chill for a few hours and have a drink or a bite to eat. Those who did decide to load up their cars early found the trip to the car park treacherous. The fact that the campsite was on a steep slope meant that the climb up to the adjoining field had become incredibly slippery, so lugging belongings up was a slow and careful process. Truck organisers had tried to soak up some of the mud in the arena by putting straw down but hadn’t seemed to consider doing this on the hill – a neglectful oversight.

Another place the weather wreaked havoc was in the car parking field, with yet more mud meaning that cars were skidding and getting stuck in their attempts to find the exit. 4x4s were employed to help drag free any floundering vehicles, but not before they got a healthy coating of dirt all up the doors and windows.

Overall, Truck 2017 was a bit of a disappointing experience. Obviously, the organisers could do nothing to improve the weather conditions, but they could have done more to deal with the effects. The organisation was poor in general, with widespread reports of stealing and the long queues to get in. Worryingly, after seeing multiple bad reviews start to flood (ha!) in on their Facebook page, they seem to have now disabled this feature, suggesting their reluctance to do anything about it in the future.

Going to festivals in England, you have to accept that part of the experience is getting wet and muddy, but this does begin to grate a bit on the third day, especially when all you want to do is sit and have a drink and listen to music and there is nowhere to do so. Having to resort to hiding in your tent several times a day is not what you paid to do. Despite this, the music was fab, especially the great line up on Saturday.

Super Early-bird tickets are now available for a limited time for Truck 2018. You can purchase them here.