An eclectic mix of weird and wonderful, Saturday brought the heavy-hitters of the alternative music scene - finishing up the festival on an impressive high.

The final day of 2000trees was host to many things. I’ve mentioned previously the perchance for sunburnt bodies and people that had only seen the back of a wet wipe maybe once judging by their smell – but now thrown into the mix was the infamous fancy dress date, a whole new bunch of ridiculous bands, and interestingly enough, a wedding. Surprisingly, it isn’t the first time that it’s happened either, with the woodland location and screaming masses inspiring a special kind of love. That’s nice isn’t it? 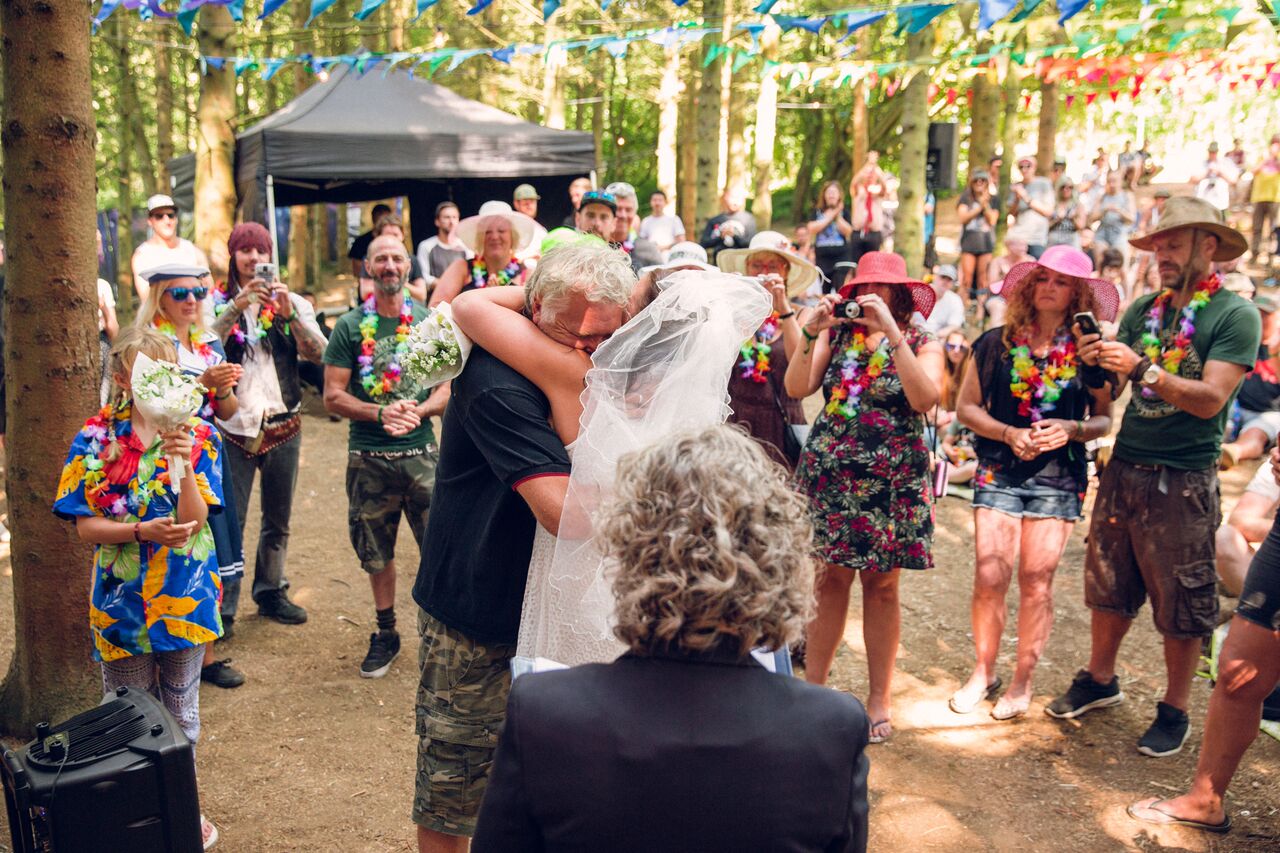 Amongst lots of pirates, mermaids, and even the Under the Sea band from Back to the Future making an appearance for ‘2000trees on the high seas’, there was actually some music to be found. Second to the Cave stage were the wonderfully heavy Bad Sign, a trio from Croydon intent on tearing up the smaller venue. Bringing with them a sound so intense it actually felt like my ribcage was going to crack open, the guys put on a remarkably performative show for how early in the day it was, taking the stage in leaps and bounds as they thrashed out some superb riffs in the early afternoon.

Milk Teeth followed up on the Main Stage shortly afterwards, giving their usual hook-driven set to a sizable crowd. Working through their first album ‘Vile Child’ with breezy assuredness, the band mixed grungy instrumentals with sweet vocals in their signature punk rock style. As I had recently seen the band at Slam Dunk in May, the set was pretty similar to their previous performance, but with a huge crowd in front and a great energy to vibe off, they managed to mix it up enough to remain impressive.

Not long after, Gnarwolves followed up on the Main Stage with another incredible set, having great fun mixing the boundaries between aggressive punk and melodic hardcore. Their genuine joy at being on stage gave their performance an entertaining edge, riling up crowds with ease to tracks such as ‘Car Crash Cinema’ and ‘Bottle to Bottle’. The very best of what a punk band can be – they set a high bar for others of a similar genre to follow up to. 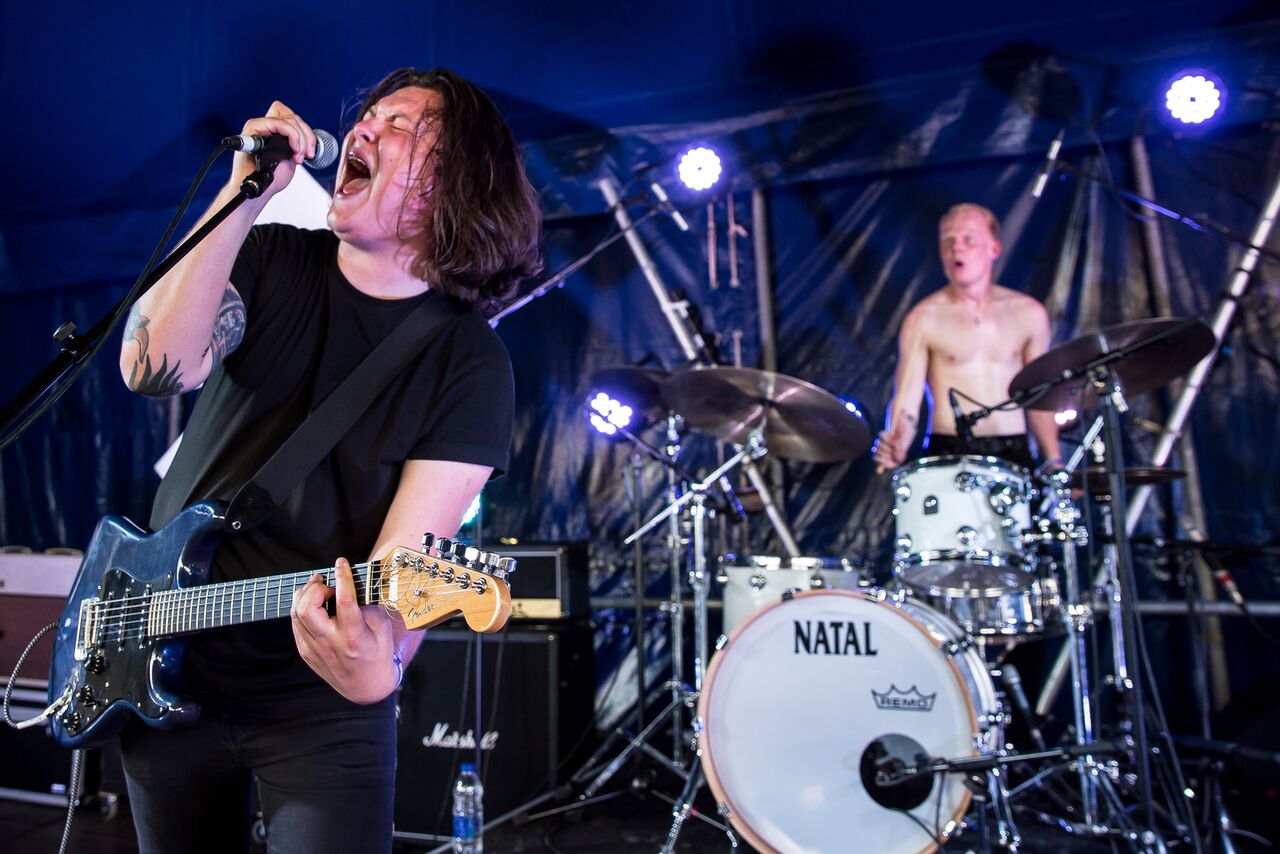 Slipping away from the main event for something a little smaller and shadier, Fizzy Blood were next up to take on the Neu stage. Relative newcomers making their mark on the alternative scene and fresh from a tour with While She Sleeps, they honestly were a highlight of the entire festival. Practically exploding at the seams with pent up destructive energy, their musical precision was matched only by their dedication to putting on as exciting a show as possible. Bassist Ciaran Scanlon had some serious bass-face which was entertaining enough on its own, but couple with the rambunctious rock and roll of retro-inspired tracks such as ‘January Sun’ and ‘Animals’, the band would have stolen the show just as equally on any of the larger stages. Effervescent, intense, and really bloody loud – they provided something that felt truly exceptional amongst a host of other talented and much longer-running bands. I managed to chat with them on what’s coming next (interview coming soon) – and it’s safe to say I’m excited for what the future holds for Fizzy Blood.

Running back to the Main stage for some girl power, Honeyblood took up their positions next for a display of all things both female and ferocious. Their melodic grunge-pop was as sway-able as ever, bringing Poseidon himself on stage to do some air guitar on his trident. You couldn’t make this up. With just the two of them on stage, it did get a little dull at moments in terms of actually watching them perform, but that’s nothing against their beautifully curated angry-femme sound. I feel like I’ve mentioned that they’re girls a lot, but it’s so great to see women – and feminist women at that – breaking onto a scene so heavily male-dominated and doing their own thing. 2000trees in general was great for representation across a range of genders and backgrounds, which was great to experience.

Next up, with potentially the most memorable name of the festival, The Front Bottoms took over for a flurry of comedic folk-tinged indie rock. Setting up their stage like a living room, decked out with sofas perched on by famous guests and the band’s VIPs alike, frontman Brian Sella greeted the crowd like old friends in a bar back home. With a packed out crowd that knew almost every word, it wasn’t hard for the guys to find their groove, delivering as many funny lines between their tracks as within them. Sella even got his baby daughter out on stage and really, really, wanted us to take a good look at her – his fatherly pride beaming out of his face at every opportunity. With a fish hat on his head that had been thrown up from the crowd, a stage full of great characters almost as entertaining as the band themselves, and songs that hit home with every warbling vocal and dreamy keyboard note, The Front Bottoms were as incredible to watch as they were to listen to. The live versions of ‘Au Revoir – Adios’, ‘Cough it Out’, and ‘Twin Sized Mattress’ were as touching and smile-inducing as in their studio counterparts, and the vibe that emanated from the stage from the New Jersey natives was as indescribable as their sound. I might have cried a bit. I also might have been quite drunk.

With my personal highlights completed for the festival but headliners still to come out, I moseyed on over to check out The Menzingers who were taking on the Cave stage for its final performance of the weekend. With massive grins on their faces and a crowd that was made up of more people surfing across the top of it than potentially in it – they were definitely worth the watch. Delivering a set that pulled you in with oceanic force, their tinny punk rock only got better with each track. 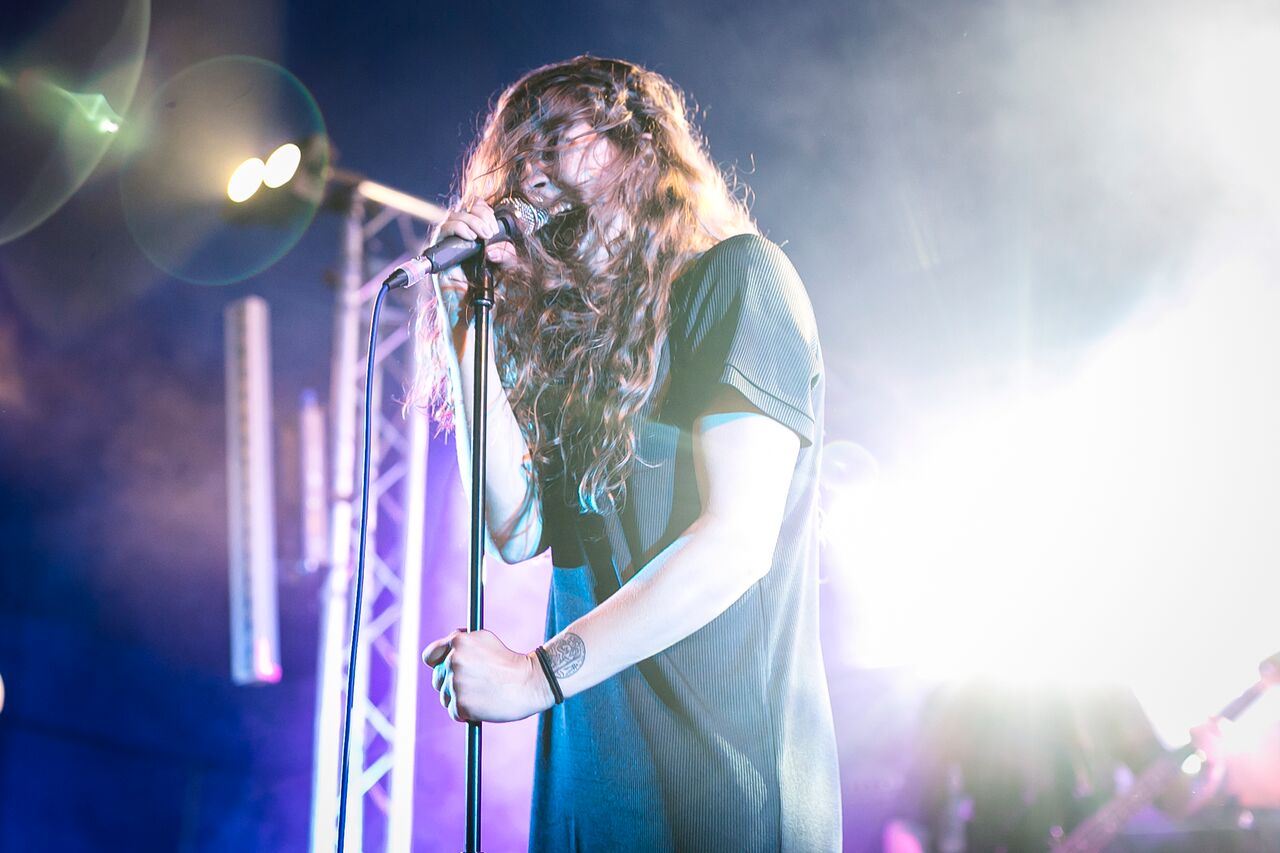 Catching only a small portion of Slaves on the Main Stage, the angsty duo did what they do best – riling up the masses with political vigour and their particular brand of London edge. Paying homage to their dead goldfish once more, the pair took over the stage with a fervour rarely seen by such a small group. Headlining at the same time, Oathbreaker finished up the Axiom stage in a decidedly different manner – delivering witch-like incantations over some intense metal backing. Vocalist Caro Tanghe was especially impressive, and deliciously creepy, in her Samara-from-The Ring performance. Whipping her hair over her face and keeping the tone dark with pleading screams and wailing tones, Oathbreaker left the festival on a brilliantly heavy note that encapsulated the variety and skill of all the performers across the weekend. The only negative I’d have to offer is whilst a great set, the similarity of their tracks meant it felt a lot like one very long ritualistic sacrifice – which is a great theme to stick to, but the novelty can wear thin in a longer headlining slot. Musically adept and vocally amazing, that’s not to take away from their performance, I would have just liked to have seen some variety throughout.

Overall, 2000trees served up a serious array of all things alternative over its three-day runtime, with everything from black metal to country celebrated in one big amalgamation of talented bands from across the globe. With the little festival in the heart of the countryside getting bigger and more impressive every year, they have a lot to live up to in 2018. However, there’s no doubts in my mind that they will absolutely smash it once more. Here’s to a hell of a 2017!