Raise your hand if you love gigs?! I’m here for another year of editing and writing about gigs somehow, which is magical, so we’re going to ignore the missed TMILLA for May. We have new acts to talk about and a new image made by our lovely Head of Design Teague (he managed to take some image dimensions and a request of “something, you know, giggy” and make 12 lovely images which is exciting!), so without further ado…

Who? Joyce Manor
Where?
The Joiners, Southampton
When? July 6th
Why? Indie rock, pop-punk Californians Joyce Manor somehow recorded their Epitaph Records debut, Never Hungover Again, in 10 days and if that isn’t punk I don’t know what is. Starting out as a duo while Barry Johnson and Chase Knobbe were drunk at Disneyland, they eventually gained two new members and to date have released four albums and six EPs. Spending two months on their latest album Cody, produced by Rob Schnapf who’s worked with Guided By Voices and Rancid, Johnson said they’d “tried a lot more” on this album. So if their previous albums and gigs are anything to go by, you don’t want to miss this! Tickets are £10 and available here.

Who? Blissfields 2017
Where? Vicarage Farm, Winchester
When? 6th-8th July
Why? We’re fully into festival season now, and where better to go than a local one? If you’re still around Southampton it’s worth checking out Blissfields, which we reviewed last year, which this year will see The Japanese House, Sundara Karma, Beans on Toast, Funke and the Two Tone Baby, and over 100 other acts perform. This year’s theme is ‘The Bizarre’, on their website they say “In July 2017 the very fabric of your perception is warping beneath Vicarage Farm as Blissfields breaks on through to the under side. What will we find together, exploring both the very real and the very unreal of the bizarre.” If that doesn’t intrigue you… Tickets are available here!

Who? Kevin Devine
Where? The Joiners, Southampton
When? July 13th
Why? You have to see this guy perform. You just have to. I saw him supporting The Front Bottoms in Portsmouth on Valentine’s Day 2016, when I apparently said he and his Goddamned Band “had catchy songs and a similar sound to As It Is, Brand New and The Mountain Goats. They had a similar vibe to The Front Bottoms, and I loved their music just as much – considering I’m rarely impressed by supports, they definitely went above my expectations.” I must not have been going to enough gigs to not be impressed by supports, or just not paying enough attention to the local music scene, but he’s just great. Don’t take mine and 2016 me’s word for it, check him out yourself – tickets are available here!

Who? Mark Thomas
Where? Wedgewood Rooms, Portsmouth
When? July 20th
Why? An activist and comedian, I’ve never seen someone who can make me laugh and then seconds later feel like crying. Based on his 2011 show ‘Manifesto’ where he took suggestions from the audience, his latest show asks the audience what they think the future holds for us. The premise is about gambling on the future, and making a ridiculous, sometimes accurate, idea of what will happen in the world. I’ve seen Mark so many times, from his latest show in Winchester which I took mum to at the very last minute to one where I ended up in the front row with my ex-boyfriend and he roasted us, saying at least we weren’t “necking at a bus stop”. It was the best moment of my life. Get your tickets here!

Who? The Undercover Hippy
Where? The Railway Inn, Winchester
When? 28th July
Why? Sometimes I go to a gig and don’t review it, because I (read: my mum) actually bought tickets. I know, I know. He’s a reggae tinged folky rap guitarist and literally all you need to know about him is he has a song called ‘Bristol Peeps’ wih the lyrics “You better check yourself before you wet yourself / And maybe I don’t know what I’m missing / But I’ve got a bladder not a bag to piss in”. Literally what more could you ask for? Grab tickets here!

Who? Festivall Mayflower Park 2017
Where? Mayflower Park, Southampton
When? 29th July
Why? Confusingly not taking place in the park opposite Mayflower Halls and Theatre, this is a one-day event which will see Alesha Dixon, The Hoosiers, Reggie ‘n’ Bollie and Wild Front perform down by the docks in Southampton. The organisers are all about engaging with the local community, wanting to reconnect people to the parks and public spaces – what better way to do that than with some lovely music overlooking some boats? If you’re itching for a festival but don’t want to travel too far, grab your tickets here. 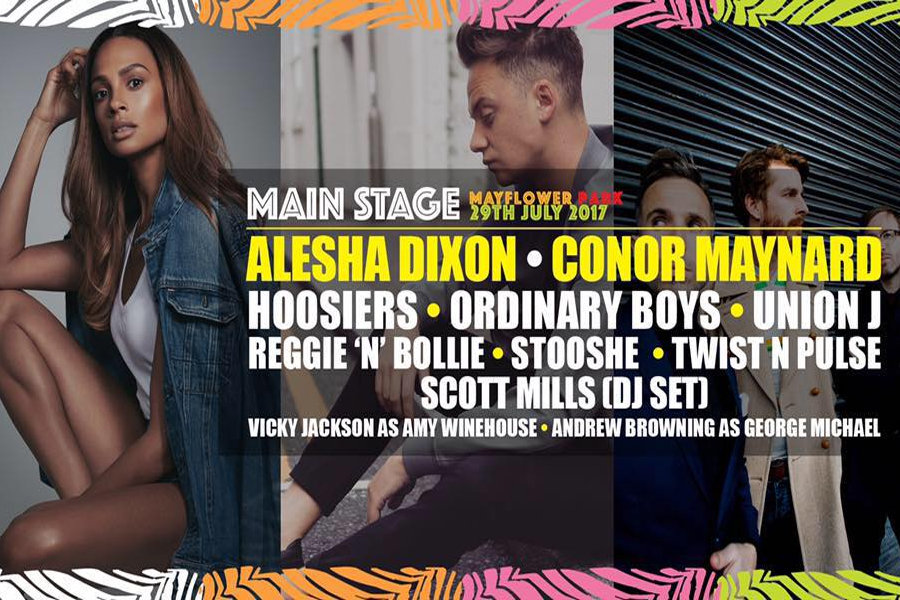