Coming into its 11th year of celebrating alternative music from across the globe, this year’s 2000trees Festival is set to be bigger and better than ever. Returning to Upcote Farm in Cheltenham, the festival is placed perfectly in the centre of the Cotswolds’ ‘Area of Outstanding Natural Beauty’, taking full advantage of its namesake through the charming woodland setting.

Selecting bands from across a spectrum of genres, popularity, and fame, the goal is to provide something for everyone – and with five stages spanning the site bursting with bands, it’s sure to do exactly that. The three-day festival kicks off Thursday 6th July with Mallory Knox and Pulled Apart by Horses headlining the smaller stages, setting the tone for another jam-packed weekend across the Friday and Saturday. Intimate sets at ‘The Forest Sessions’ also begin, a unique opportunity to see performers up close and personal in the woods, a world away from the bustling stages of the main site.

Friday the 7th offers headliners such as Frank Carter & the Rattlesnakes and Nothing But Thieves on the primary slots, with Beach Slang and The Wonder Years across The Axoim and Cave stages respectively. As the first full day of the festival, 2000trees will open up for day ticket holders and get the mainstage started, acting as a tiered run up to Saturday’s main event.

On Saturday, the alarmingly popular Slaves will be rounding off the festival, a punk duo that have shot to fame with two top-ten albums and multiple awards across the relatively short 5 years since their formation. Supporting will be Lower Than Atlantis, the band behind the immensely popular track ‘Here We Go’, with Oathbreaker and The Menzingers heading up the other stages to finish up the weekend.

With the festival organisers already claiming tickets are running low, now would be the time to snap them up. Starting at £50 for a day ticket and £110 for the three days, 2000trees is as much a bargain as it is a good time. A beautiful natural setting, amazing food, and some note-worthy bands – the 11th iteration of the festival should be the best one yet. 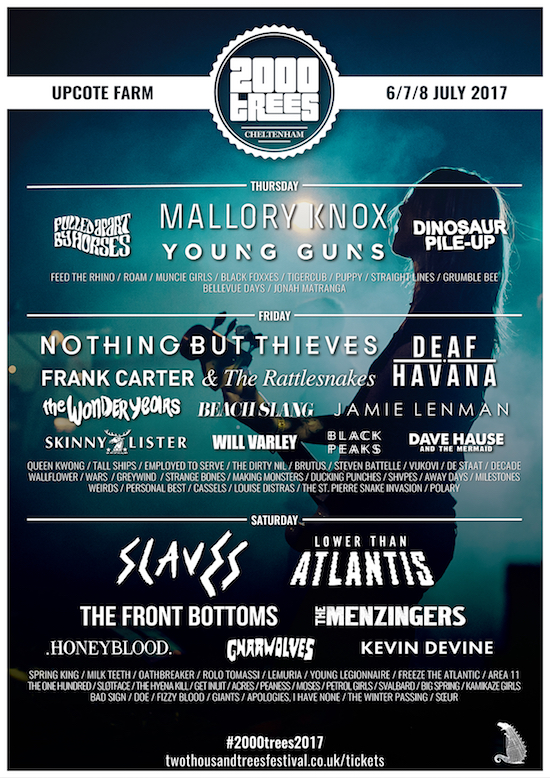