Read more
You are at:Home»Live»Review: Tom Clarke at The Engine Rooms, Southampton
By Carly-May Kavanagh on June 25, 2017 Live
100%
100
Emotional

Full of the energy of a gig from The Enemy, Tom Clarke turned The Engine Rooms into an acoustic singalong and it was, as expected, an incredible and emotional evening.

It’s rare for me to like Coventry, let alone be proud of having been born there, but somehow anything to do with The Enemy and I’m overflowing with pride. A band whose debut album is ten years old this month and who, through that album, became the voice of a city, lead singer Tom Clarke decided to embark on a solo acoustic tour to celebrate the anniversary of chart topper, We’ll Live And Die In These Towns. The songs were written acoustically, as he explained on their Facebook page, and an acoustic tour felt “like the right way to put them to bed”. 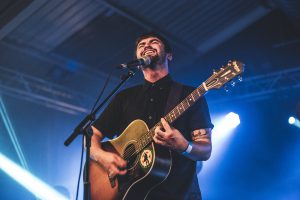 Support came from Callum Lintot and Seán McGowan, who both played acoustic sets and went down well with the audience. I did think it was unfair on Lintot to have to play acoustically – he told us he normally plays with a band – when Tom later came out with a keyboardist and bassist, but he did very well despite this. Seán was in the midst of celebrating having signed to Xtra Mile Recordings and very excitedly told us about his upcoming headline tour in September (which I highly recommend you go to because support comes from Happy Accidents, one of the coolest bands I’ve ever seen live).

Tom came on stage to a sold-out venue, launching straight into the album with ‘Aggro’. There were frequent bursts of chanting, “Now this song, is about is about is about you” which happened at near enough every gig, especially during their final tour, and Tom couldn’t have looked more emotional or excited to be playing the songs if he’d tried. Playing songs from other albums “That [they]just couldn’t make work live” like ‘Sing When You’re In Love”, he turned an angry, frustrated, disillusioned set of songs into acoustic versions which just shouldn’t have been possible, but he somehow made it work. The silence during the verses of ‘Pressure’ were really just incredible – I doubt there was a person in that room who didn’t know the words to every song. 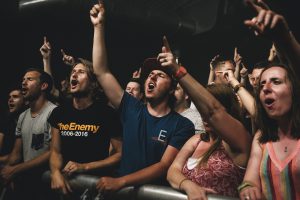 He played the whole album through, in order, creating an environment that felt like a massive singalong moreso than a typical gig from The Enemy – though just as energetic. He told us “You lot make these gigs and you have done for ten years”, and promised that as long as we wanted him to keep coming back on each anniversary of the album then he would, promising new material for “next time”. Chants of the ‘This Song’ chorus continued long after he left the stage, as everyone left with the sound of Coventry’s disillusionment ringing in their ears and a promise for Tom to return.

The tour continues until July 7th, when it ends in Sheffield. Tickets are available here.