Read more
You are at:Home»Live»Festivals»Preview: Slam Dunk 2017
By Ash Millman on May 5, 2017 Festivals, Live

As usual, Slam Dunk 2017 boasts a wealth of pop punk favourites, returning to the UK across three venues this May for a day of alternative rock. Hosted at Birmingam NEC on Saturday 27th May, Hatfield Forum on Sunday 28th May, and bringing in the bank holiday with a bang in Leeds City Centre on 29th May; the annual festival has already sold out at its Southern-most venue.

This is likely due to the exclusive opportunity to see Enter Shikari’s ten year celebration of ‘Take to the Skies,’ the debut album of the synth-heavy hardcore quartet. Rocketing them to fame, the album is one loved by many – selling 28,000 copies in its first week alone. Now ten years later, fans are keen to hear the tracks that first sparked their following of Enter Shikari in a live setting. Supporting the band on the main stage will be British pop punk band Don Broco, Deaf Havana, Beartooth, Bury Tomorrow, Crossfaith, We are the Ocean, and Andrew McMahon in the Wilderness. Of the event, Enter Shikari vocalist Rou has stated:

“Slam Dunk is a festival that we’ve been attending from the very start! It’s grown into one of the most important festivals in alternative music, and it will be an absolute honour to headline it in 2017 […] The fact that we get to reminisce and relive tracks we recorded so long ago, and that are still held dear by so many, is something I could have never anticipated back then and fills me with appreciation for everyone that has supported this band over the years.”

Stages will be sectioned roughly by genre, with pop punk, ska punk, metalcore, and alternative rock being featured, to name a few. Bowling for Soup, Neck Deep, Memphis May Fire, Against Me! and Ocean Grove will also be headlining their own respective stages. Alongside a day of music, the infamous Slam Dunk after party by Uprawr will be running after each event – requiring an extra pass for entry. 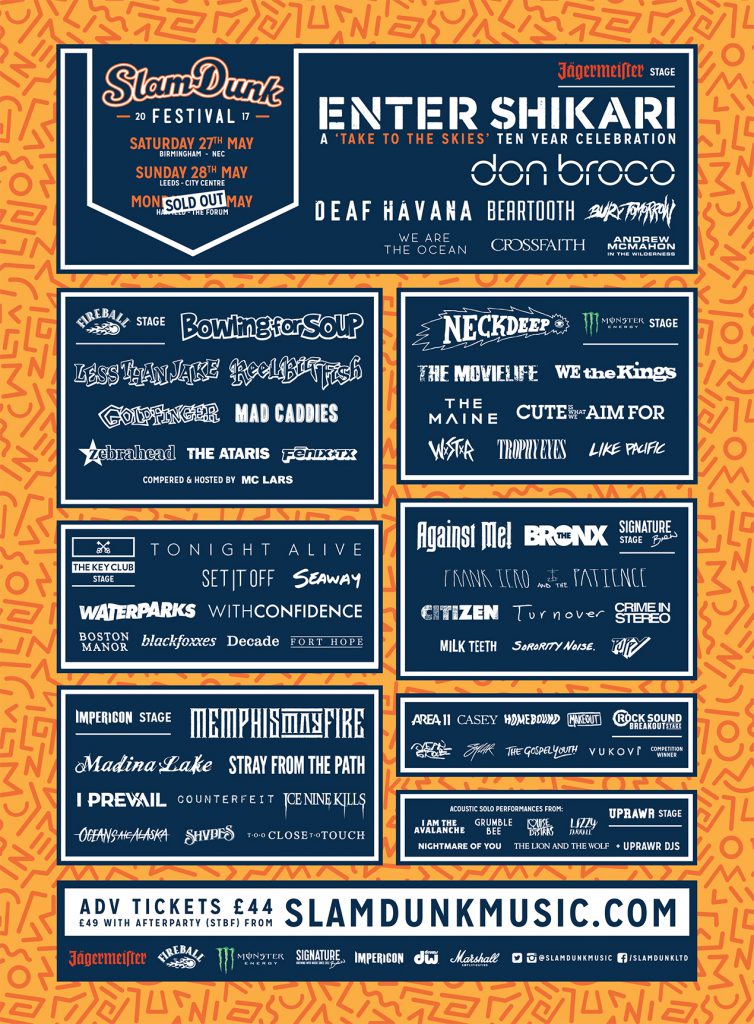