Read more
You are at:Home»Live»Review: Sunset Sons at the O2 Academy, Bournemouth
By Hollie Dabson on November 4, 2016 Live

Back in 2014 Sunset Sons first broke on to the scene when the band were on a BBC introducing playlist. A year later their single ‘She Wants’ was made into a track of the day and so with the support and backing of popular Radio 1 DJ’s, like Zane Lowe, their success and fame began to rocket. Imagine Dragons also picked up on their sound, using the band for their main support on their European arena tour last October. A tour which began a year ago this month, it’s fair to say they have come a long way over the last two years, now playing to a sold out show in the lead singers hometown of Bournemouth.

The show opened with the first support act Cortes who certainly engaged with the audience, evoking an excitement and buzz throughout the crowd. Their new-age indie rock sound was certainly popular and the single ‘Close to Nowhere’ held strong guitar solos and catchy choruses – something Sunset Sons play on too – resembling an early Catfish & the Bottlemen sound, perhaps mixed with something rockier.

Shortly after, the crowd was yet again graced with a great support act, this time Sunset’s main support Jessarae took to the stage for some slightly slower acoustic melodies. With a similar lyric sound to Hozier – especially heard of in their latest single ‘Milk & Honey’ – but hailing from California, Jessarae and his golden locks emulated a vibe of sun, sea and surf. Something it’s clear the boys of Sunset Sons also live for in their free time, Rory even spoke up about a beach clean-up in Bournemouth run by the environmental impact group Surfers Against Sewage. 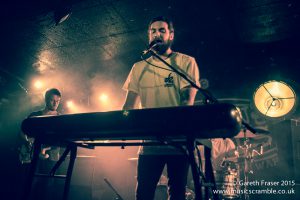 Despite two great warm acts, the level of uproar and cheers increased as soon as the boys stepped foot on stage. There is no doubt that the fast paced upbeat sound of Sunset Sons was heavily prized by their crowd of adoring fans. The stage presence of the bands lead singer, Rory, definitely stole the show by coming into the crowd a few times and climbing upon their large amps either side of the stage during the performance. His charismatic approach to the set gave their show a fantastic energy. Popular songs such as ‘Remember’, featured on their debut album Very Rarely Say Die, evoked an atmosphere of unity as the crowd sang along. The boys made almost every song feel like a huge finale, with all the waving and blowing kisses into the crowd. It was clear they were completely appreciative of their fans and in awe of the support given to them. By their last song ‘On the Road’, the single of their latest album, Rory was once again among his fans deep in the crowd after jumping over the barriers. 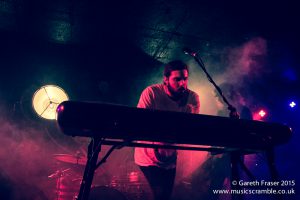 It’s refreshing to see a band who genuinely love their fans and I can’t help but feel like these boys will go far, especially with such a great support base. After playing many venues stuck in a clear surfing/skiing vibe such as Boardmasters festival in Cornwall, it would be great to see Sunset Sons break out of this comfortable circle and conquer mainstream media more with their laid back indie sound.

You can buy their latest album ‘Very rarely Say Die’ on iTunes now and the tour continues throughout November, tickets purchased here.

A third year English student, Radio DJ on Surge and an attempting explorer of the world. Big fan of dogs, any kind, especially puppies.