Read more
You are at:Home»Live»Comedy»Comedian In Focus: Sara Pascoe
By Sophie Trenear on October 13, 2016 Comedy, Live

Smart, intense and inarguably funny, Sara Pascoe is one of the biggest rising stars of the comedic realm today. Combining sardonic humour with vibrant flavours of idiosyncratic philosophy, Pascoe’s stand-up’s are definitely unique, but, luckily, far from sparse. Currently touring the UK, her shows are flying more and more into the realm of ‘in demand’ as she discusses ‘in demand’ topics of the likes of broom closets, female instincts, and the declining health of male sperm.

Performing stand-up since 2007, Pascoe first saw herself catapulted into the comedic stratosphere with her show 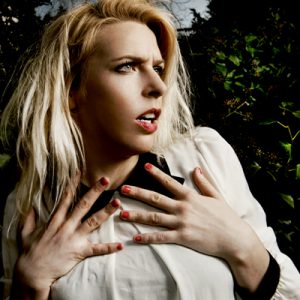 Sara Pascoe Vs. Her Ego which she performed at the Edinburgh Festival in 2010. The show received very positive reviews and saw the start of Pascoe’s “kooky alter-ego” being unleashed on stage. As she continued to pick up speed with more shows, more gigs, more tours, she appeared on Live At The Apollo in 2012, a show which was hosted by fellow comedian Kevin Bridges, which gained her even more traction in the mysterious mainstream realm of comedy.

Appearing on various panel shows such as QI (which she won, obviously – with 28 points, no less), Never Mind The Buzzcocks and Have I Got News For You, Pascoe also returned to the Edinburgh Festival in 2014 and began her first ever UK tour, Sara Pascoe Vs. History, which found her nominated for the Foster’s Edinburgh Comedy Award 2014 for ‘Best Comedy Show’. 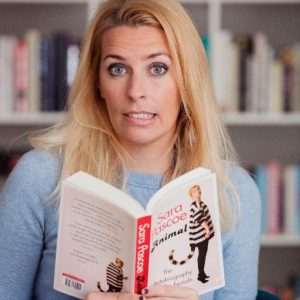 Fast forward two years later, and, having reappeared on Live At The Apollo (a show I was lucky enough to be seated happily in the audience for) alongside Jon Richardson, and appearing as a panellist on two Radio 4 programmes, The Infinite Monkey Cage and The Unbelievable Truth, Pascoe has just travelled to every edge of the UK for her latest tour, Animal, which has been critically acclaimed. Her book, Animal: The Autobiography of a Female Body was released earlier this year in April.

Leading the forefront of new, exciting comedians trailblazing their way through to the mainstream with new, exciting, quirky comedy, Pascoe remains distinctive for her live, on-stage persona. She is adorably awkward yet unshakably assured, funny without delving into stupidity or cheap laughs, smart with her humour and direction but even smarter at bringing an audience closer with it, even with that “kooky alter-ego” of hers.