On Sunday morning, as the sun came out and began to solidify the muddy rivers taking the place of pathways, swarms of people emerged from the camps to make the most of the good weather. All of a sudden, Bestival had its buzz back. With our sights set on the Feast Collective area by the Inflatable Church, we marched past the Showhawk Duo on the Main Stage – playing 90’s club hits such as ‘Sandstorm’ and ‘I Need a Miracle’ on acoustic guitars much to the delight of the growing audience. 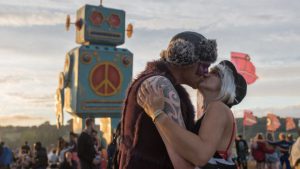 After a date with some amazing Indonesian curry, we leapt at the opportunity to be a part of one of the infamous weddings I had heard about. We entered the Inflatable Church and took in our surroundings: stained “glass” windows, a DJ at the altar and a leopard print clad priest to officiate the ceremony. The bride entered to ‘Single Ladies’ before a dance off from each side of the congregation, followed by hip-hop vows interjected with improvised raps from Ben Izak – “Standing at Bestival, fabulous weather, standing here with my man Taz, my girl Heather” had us all in fits of laughter and the whole thing was bloody wonderful to watch.

Then it was time to watch Frances in the Big Top: despite a lack of sound for the first few lines of her opening song, the performance that followed was just gorgeous. Her voice is so powerful and clear live, accompanied with heart wrenching lyrics and smiley chats with the audience in between songs. She covered Bastille’s new single ‘Good Grief’ and announced that it was being released as her own on Spotify – good news as I definitely preferred her version with soaring notes and piano accompaniment. Her most famous songs ‘Say It Again’ and ‘Let It Out’ were best met by the audience, with swarms of girls singing along passionately. Frances mentioned having finished her new album and now we all wait anxiously for its release, especially after falling in love with track ‘Cloud Nine’ that she previewed.

In the evening, we caught a bit of Bastille on the way to the Press Tent. Now, disclaimer time, I am really not a fan of the band. So, instead of picking apart each song, I shall instead congratulate them on drawing such a large crowd and compliment frontman Dan on his spacesuit costume. 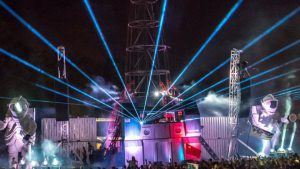 What we were really excited for that night was Sean Paul. After spending my sixth form years flailing around to his songs in sweaty clubs, the opportunity to witness the man in all his glory was mind-blowingly exciting. Now maybe it was because it was the last night and people were knackered, but the crowd seemed quiet and preoccupied, at least where I was stood. The biggest cheer that was raised from the audience was “do we have any Jamaicans in the house?” – big fan of the sarcasm. His performance was really, really good, just dampened by a crowd (the biggest we had seen all weekend) that didn’t seem that up for partying along. After snaking through the crowd slightly and maintaining better positions, we enjoyed his hits ‘Got To Love Ya’, ‘She Doesn’t Mind’ and ‘Glue’ before the big finish that was ‘Temperature’, a song that I would dance outrageously to alone in a dark room whilst stone cold sober.

The last two days of Bestival took a noticeable dip in atmosphere after the appearance of the rain. All in all, the weekend was still a success in my eyes nevertheless. There has been some negative press surrounding the festival ever since and most of it undeserved. Curator Rob da Bank came forward with a statement addressing the smaller scale of the weekend this year for a more boutique feel and any sound problems – an admirable move in my opinion.

Bestival was still the singular most magical experience ever, regardless of those (small) things. The beautiful decorations and mind-expanding touches designed to unlock childlike wonder in all of us made everything so special, alongside some incredible live music as well as carnival parades, circus acts and out of this world fancy dress. I headed to the ferry sad to be entering the real world again, unable to cover my eye bags with glitter and don a silver sailor hat everyday.