Saturday morning, rain was falling. Out came the waterproofs as we headed out for a fairly early start to the music. The pathways towards the arena and the main area itself were noticeably quieter, either the mud or the hangovers that whacked us keeping other spectators at bay too. After receiving an alert from the Bestival app saying that due to illness the Chuckle Brothers would not be performing today, we were very confused to hear their arrival onto the Main Stage from the Press Tent. 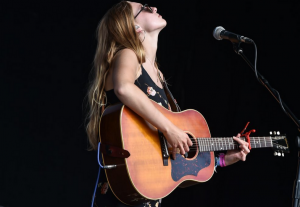 As is the case with extreme weather at outdoor music occasions, any tented areas become the place to be in order to shade yourself or protect from rain. What this does to an atmosphere within that tent is unfortunate and it was most noticeable during Billie Marten’s set. For a petite blonde songstress with delicate, stripped back sound to her music, the constant rumble of talking and mostly seated audience must have been off putting. Not to say that her songs weren’t performed beautifully, just without much gusto.

Next, it was the turn of Beaty Heart to take to the fairly packed Big Top stage. Having previously interviewed lead singer Josh Mitchell, I was full of anticipation to see how the group would perform tracks from their new album ‘Till the Tomb’. What they delivered did not disappoint and actively improved the damp atmosphere inside the tent – all vigorously bouncing and stamping to the beat. Peppering their new singles with instrumental sections featuring bright neon lights and a roaring bass, people got on the feet to dance along. Despite noticeable annoyances from the group members at technical difficulties, constantly miming and pointing to people off stage, their set was what everyone needed on that rainy afternoon. Songs ‘’Soft like Clay’ and ‘Raw Gold’ worked best in lifting everyone’s spirits and seemed flawless live is spite of any sound faults. 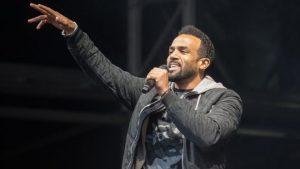 In a seemingly strange move, the new act we watched was Craig David’s TS5 on the Main Stage late afternoon. In hindsight, the earlier placement of his set meant that festival goers were forced up to the festivities – a move which was perfect for this wet day. As demonstrated at Common People, the addition of the TS5 meant that Craig David not only performed his own songs, which went down a storm, but remixed garage, 90’s classics and R’n’B hits to ensure maximum wiggling potential. From ‘Flowers’ by Sweet Female Attitude (TUNE) to Whitney Houston’s ‘It’s Not Right But It’s Okay’, every song was expertly mixed. Before unveiling his new collaboration single with Sigala, Craig David invited Kurupt FM onto the stage, introducing them as the people who had made him who he was 16 years ago when he started making music. A touching tribute, yet their presence on stage for the next song left the crowd around me laughing at their few “ahh yeah”s interjected in every so often. Nevertheless, the entire performance overall ended up delivering the goods, finishing with the sky clearing and the mud beginning to dry.

The rest of the day passed in a soggy haze, witnessing psychedelic girl gods Hinds on the Invaders of the Future stage giving it some welly and taking in The Cure in all their glory on the Main Stage. The crowd were unsurprisingly most animated during their classics ‘Lovecats’ and ‘Friday I’m In Love’ and noticeably disappointed at the band’s early departure from the stage before their 3 hour slot was finished.

After this, we wandered around the arena, dabbling with Kurupt FM and Goldie & MC Codebreaker’s sets in the 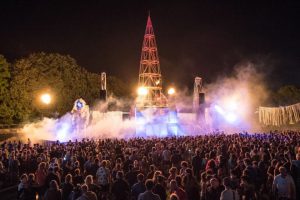 Bollywood tent before heading to see Skream at the Spaceport. Once again, the unusual lie of the ground by the DJ booth meant that we struggled to get into the crowd then found masses of space in the centre once in there. He remixed disco and funk classics to keep audiences grooving into the small hours, with a personal favourite being Michael Jackson’s ‘PYT (Pretty Young Thing)’ during which flames shot into the sky and lasers erupted out of the ominous astronaut figures next to the stage.

At long last, at an eye watering 3.15am, it was the turn of electronic folk band Crystal Fighters to close the Big Top for the night. When reading about the Bestival appearance, I had envisioned a sunny afternoon slot so was almost horrified to read that their upbeat, bouncy tunes would be the soundtrack to the end of the third night. I needn’t have worried as what the band delivered made the whole audience forget their hangovers and troubles, instead leaping about along to their fusion of genres sound. The energy and enthusiasm from the band flowed back and forth between them and the crowd, making for a beautifully unique live experience. We squelched back to our tent on top of the world after a decidedly wet day.